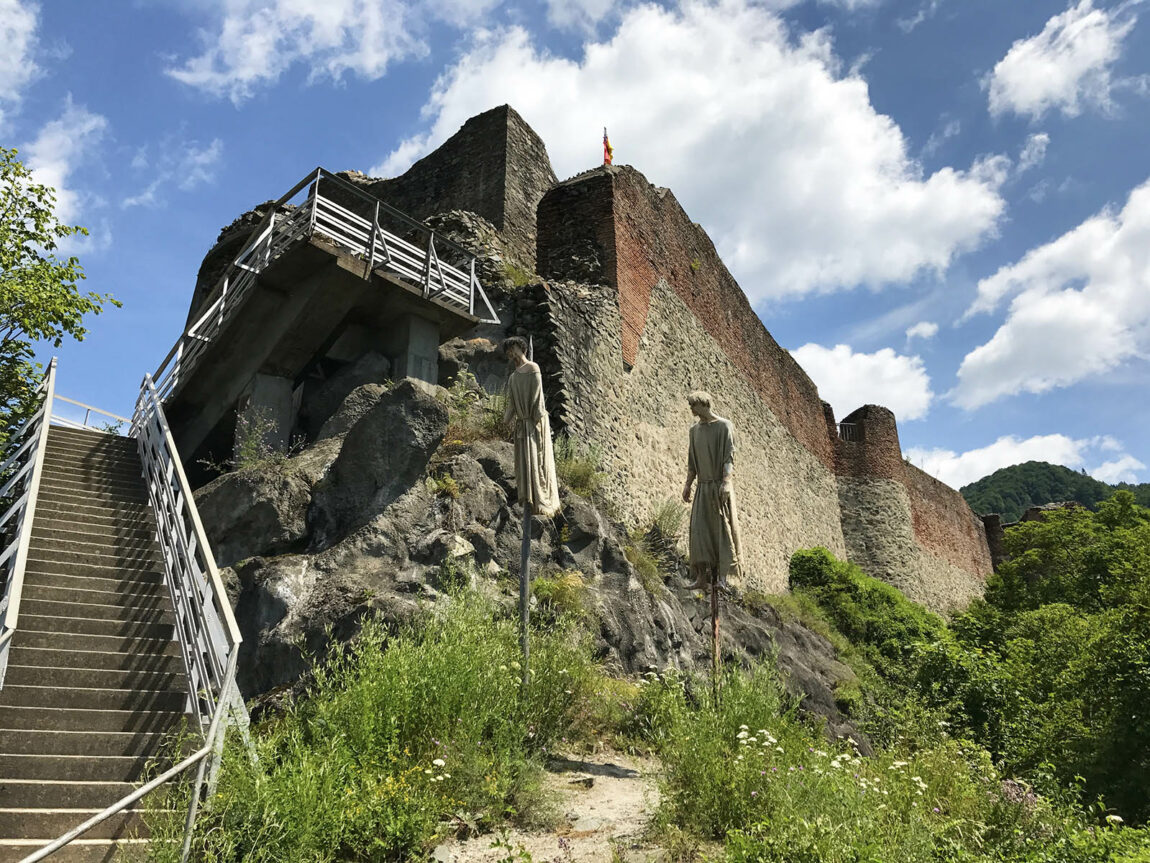 Visiting the Poenari Castle in Romania is only for those who have nerves of steel, because if you want to reach the top you have no other choice than to climb 1480 concrete steps. Don’t worry though, the amazing views of the Carpathian Mountains and Arges River make the effort totally worth it.

Since I watched Francis Coppola’s movie Dracula almost 25 years ago, I have been fascinated – and by fascinated, I mean utterly terrified – with this fictional character. Dracula’s link to Transylvania always made me wonder how this region really looked like. To be honest, it’s not even a bit creepy; it’s one of he most serene and delightful places in the world.

Poenari Castle was the last attraction we visited during our stay in Transylvania before heading back to Bucharest. The castle – once considered an essential fortress due to its key defensive position- has a strategic location perched, like a giant bat, on a cliff at the foothills of the Carpathian Mountains overlooking the Arges River.

Getting to Poenari Castle

Once you get to Poenari Castle and pay the entrance fee, make sure to stretch your legs as you have 1480 steps ahead of you; the only way to the top up is making that climb up. Take your time to climb up as this is a very strenuous hike. It took us around 30-35 minutes to reach the top at a medium pace and we took a couple of breaks in between.

The day after the hike our legs were totally sore, and we had a hard time walking – embarrassing for two athletic types. However, the beautiful views of the surrounding valley were imprinted in our minds making the tough hike totally worth it.

As you climb up you will notice there is an electric fence to prevent bears to get close. Bears are the lovable locals, and while some will say bears are friendly towards Romanians it’s best to keep a safe distance. As a precaution, the castle has been closed at times when bears have been spotted wandering nearby.

According to the Romania tourism website the tentative re-opening date of the fortress is scheduled for 2022. There are also plans to build a tram car so visitors can avoid having to climb up the steps.

After the arduous climb, just as you reach the top of the castle, you will see two mannequins dressed like impaled prisoners of war. This is a reminder of how one of the owners of the castle and the inspiration for Dracula – Vlad Tepes – dispensed of this enemies.

Tip: There are also walkways and handrails available throughout the fortress to make it easier to move among the ruins. As you explore the fortress, remember to soak in the stunning views all around and breath the crisp mountain air.

Vlad Tepes impaled criminals, his eternal nemesis the Turks, and various other enemies; using them as decorations by raising their impaled bodies in the town square for all to see. Nearly any crime including lying, stealing or killing, could be punished by impalement so everyone understood the consequences of their actions. Needless to say, many people behaved.

According to the Romania Tourism site, Vlad was so confident in the effectiveness of this strategy that he placed a golden cup on display in the central square of Târgoviște. The cup could be used by thirsty travelers, but no one was allowed to remove it from the square. The cup was never stolen throughout Vlad’s reign.

For many of us who live in the modern world, we have to put these cruel methods into context, as Vlad is considered one of the legendary heroes in Romanian history. Peace and commerce thrived during a time where there was little stability due to crime, corruption and the ever-present threat of invasion from the Turkish Empire. His battles with the Turks, in which he served as the first line of defense for Europe and Christianity gave birth to his legendary reputation – the protector of Romania.

A brief history of the castle

Poenari Castle was built in the 13th century by the first Wallachian rulers, one of the proto-Romanian states, changed names and ownership over the decades.

Vlad Tepes who ruled Wallachia at various times from 1456-1462 saw the potential of the castle’s location: a strategic vantage point to prevent attacks along with an easily accessible escape route if needed, making it almost impossible to siege. It was essentially an enemies worst nightmare – even more so when decorated with impaled prisoners…

Therefore, when he assumed the throne, he ordered the castle to be repaired and turned it into one of his main fortresses defending the country against the Ottoman Turks. With its 2/3-meter-thick walls and 5 guard towers it only fell after a long assault by the desperate Turkish army in 1462. When the Turks overran the castle, Vlad was able to escape through a secret passageway that led north through the mountains.

Poenari Castle was eventually abandoned in the 16th century and left in ruins. Unfortunately an earthquake struck the region in the 19th century destroying the northern section of the fortress. It remained in ruins until 1970 when the Romanian government dedicated resources to repair the castle and transform it into a tourist attraction. Despite a strong link with Dracula, Poenari Castle does not enjoy the same popularity as Bran Castle. Location: Transfagarasan, Arefu 117040, Romania

Legend of the castle

Legend has it that when Vlad Țepeș claimed the throne, he ordered the arrest of all the noble families who were involved in the murder of his father, Vlad II Dracul. As punishment some nobles were impaled while others were forced to walk from Târgoviște (Vlad’s capital) to Poenari Castle and rebuild the fortress in the place of the old outpost.

The entrance fee to the castle costs less than US$2.

Hiking shoes: Bring comfortable hiking shoes for your hike up Poenari Castle. Here are our recommendations:

Sunscreen: We recommend Supergoop! SPF40 for your face and Coppertone for your body.

Water: Going up 1480 steps will make you really thirsty. Bring along the Nomader Collapsible Water Bottle which rolls up for compact travel.

The lighthouse of Cabo Polonio: A must-see attraction in Uruguay