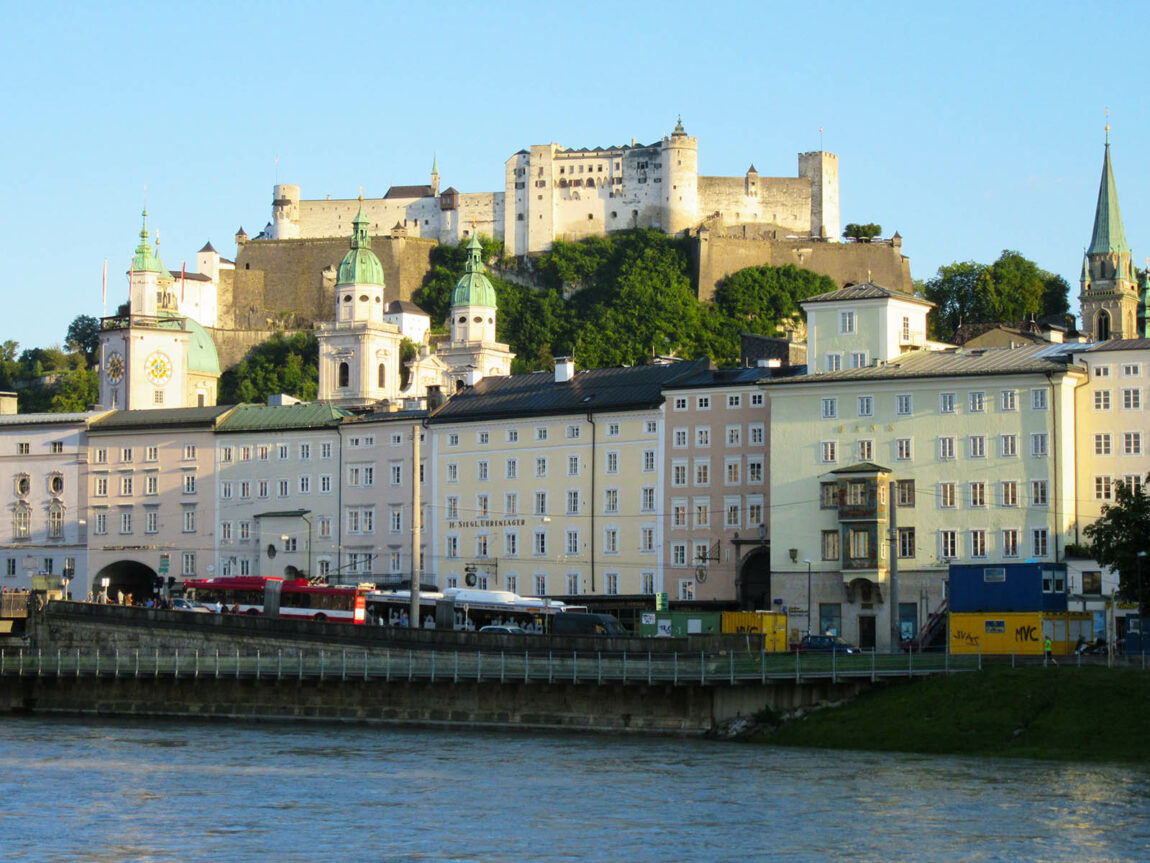 Read this blog post to find out what to see in Salzburg, Austria.

Salzburg’s hills are alive with the sound of music – literally, the city is the birthplace of one of the giants of classical music, Mozart, and was the principal shooting location for the movie, “The Sound of Music”. It’s just impossible not to be swept off your feet by this baroque city – with narrow paths, an imposing fortress watching over the town, and the Alps framing a musical landscape.

The literal translation of Salzburg is “Salt fortress”, as it was the focal point of the salt trade. A historical ancient city, originating from settlements around salt mines, it is well known for its gorgeous Baroque architecture. Despite being bombed during World War II, much of the city’s architectural wonders remained intact – giving visitors the possibility to experience the city at its cultural height.

Tip: Salzburg welcomed us with freezing temperatures in the middle of August. As it was summer, we never brought warm clothes with us, so we had to stop by a store to get a hoodie and a scarf. Remember to always bring warm clothes – even if it’s summer.

We stayed in Salzburg for three days, minus a day trip to Hallstatt. Two full days in the city gave us plenty of time to visit the top attractions. Salzburg is a small city so you will be able to visit most of its attractions on foot; take advantage of the cultural experiences the city offers and don’t rush.

Tip: Bring comfortable shoes so you don’t have to worry about getting blisters. Offering a 360-degree view of the city of Salzburg, Hohensalzburg Fortress is the biggest and best-preserved castle in Central Europe. The fortress was constructed back in 1077 – under the orders of archbishop Gebhard – to serve as protection for the archbishops and principality by attacks from hostile invaders. Hohensalzburg Fortress has never been captured by foreign troops.

The fortress continued to be expanded under the succeeding archbishops until 1500 when it evolved into the iconic form we know today.

The fortress can be visited year-round, giving you an excuse to visit the city in any season. There are two ways to get to the fortress: on foot or by taking the funicular, located in the Festungsgasse. For prices and opening hours visit the official website. We chose to do some exercise and walk up which gave us the chance to take in the magnificent views along the way.

Once you reach the fortress you will have the opportunity to view the city of Salzburg from above – a view that is equally as breathtaking as from Makartsteg bridge – as well as visit a couple of museums. These include the Fortress Museum which preserves the history behind the building and its surroundings, and shows exhibits on how the prince archbishops lived; the Marionette Museum; and the Museum of the Rainer Regiment.

Visit the official website for information about opening times and prices. Stop by the “Hagenauer Haus” at No. 9 Getreidegasse to visit Mozart’s birth place in 1756. Not surprisingly, this house is one of the most visited museums in Austria and a must visit for all Mozart’s fans. The museum features original rooms, along with authentic furniture and artifacts from the 18th century. There is lots to discover as many of Mozart’s original certificates, letters, and other crucial memorabilia documenting his life in Salzburg are on display. Mozart’s own violin and clavichord can also be viewed in this museum.

The fees are as follows:

However, for updated prices please visit the official website.

The bridge features hundreds or thousands of locks attached by lovers lending a colorful appearance to the bridge as the sun light plays off the latches. This bridge is well known as a great photography spot to capture the Hohensalzburg Fortress playing sentinel over the city.

Go back in time as you visit Getreidegasse, located in the heart of the city’s old town. Not only is it the street where Mozart’s house is located, Getreidegasse is the perfect spot to visit traditional shops and grab a bite to eat.

The houses in the Getreidegasse are characterized by featuring beautiful facades which have important dates engraved to mark moments in their personal history. A particular highlight of this street is the many guild signs which are very ornate and quite elaborate, hanging from the buildings high above pedestrians’ heads. Keep an eye out while you walk to see how many signs you catch.

Walk around the old town

Do not miss the opportunity to walk around this musical city. Discover Salzburg’s hidden alleys and cobbled streets, sprinkled with baroque cathedrals and charming little cafés. It wont be strange to hear a faint familiar tune as you walk, and when you do make sure to follow the song to its source for a live performance. If you are lucky, you will hear a rendition of Mozart’s classic compositions in the city that gave the world this musical giant.

Located in the heart of the old town, Mozartplatz’s main attraction is the statue of Mozart, designed by Ludwig Schwanthaler, and found in the middle of the square. This is a great place to catch your breath, it is a bustling plaza with classical music humming along to the pulsating activities.

Do not forget to look for the No. 8 house – where Constanze Mozart-Nissen, Mozart’s wife, once lived.

Considered the most beautiful square in Salzburg, Residenzplatz serves as the main venue for sporting events, live concerts, and an unforgettable New Year’s Eve party. Residenzplatz was among the filming locations of the “The Sound of Music” featuring an impressive baroque fountain, the most beautiful one in the city. When you visit, you’ll be in a crossroads of history – an ancient Roman forum stood in this plaza since the city’s founding.

Don’t be fooled by the name – Franziskischlössl is not a castle (schloss is German for castle); it’s a restaurant located at the top of the Kapuzinerberg which prepares a wide selection of Austrian dishes. Kapuzinerberg offers magnificent views of the old town and the Hohensalzburg Fortress, so put on your sneakers and climb up the hill. There are many trails to choose from and they are well-kept. The Mirabell Palace was built in 1606 by prince-archbishop Wolf Dietrich for his beloved Salome (his mistress). Today, Mirabell Palace is home to municipal offices and the residence of Salzburg’s mayor. The Mirabell gardens grounds served as one of the shooting locations for the “The Sound of Music”, featuring the newly redesigned gardens by archbishop Johann Ernst von Thun.

Tip: This location offers a great photo opportunity of the gardens with the backdrop of Hohensalzburg Fortress.

There is no entrance fee to the Mirabell gardens.

Read blog: Things to do in Hallstatt: Austria’s picture-perfect village

Hotel am Mirabellplatz: This boutique hotel is located opposite the Mirabell Palace and is only a short walk from the old town. Additionally, it’s only a 10-minute walk from the main train station. There is a 24-hour reception, free Wi-Fi in the lobby, and a lounge offering free drinks and newspapers.

Altstadt Hotel Hofwirt Salzburg: This hotel is located only 950 feet from the Salzburg Main Train Station and a 15-minute walk away from the old town. The Adlerhof hotel offers free Wi-Fi and free on-site parking. The hotel is a historic building dating from 1900, with plenty of history within its walls.

Hotel Elefant: Located in the heart of Salzburg’s Old Town, the historic, fully renovated Hotel Elefant dates from the 13th century! Mozart’s birthplace and the Festival Hall can be reached within a few steps from the Hotel Elefant. Mirabell Castle, the Hohensalzburg Fortress and the other side of the city center are only 650 feet away.