Crazy Horse Monument, South Dakota: How to plan your visit 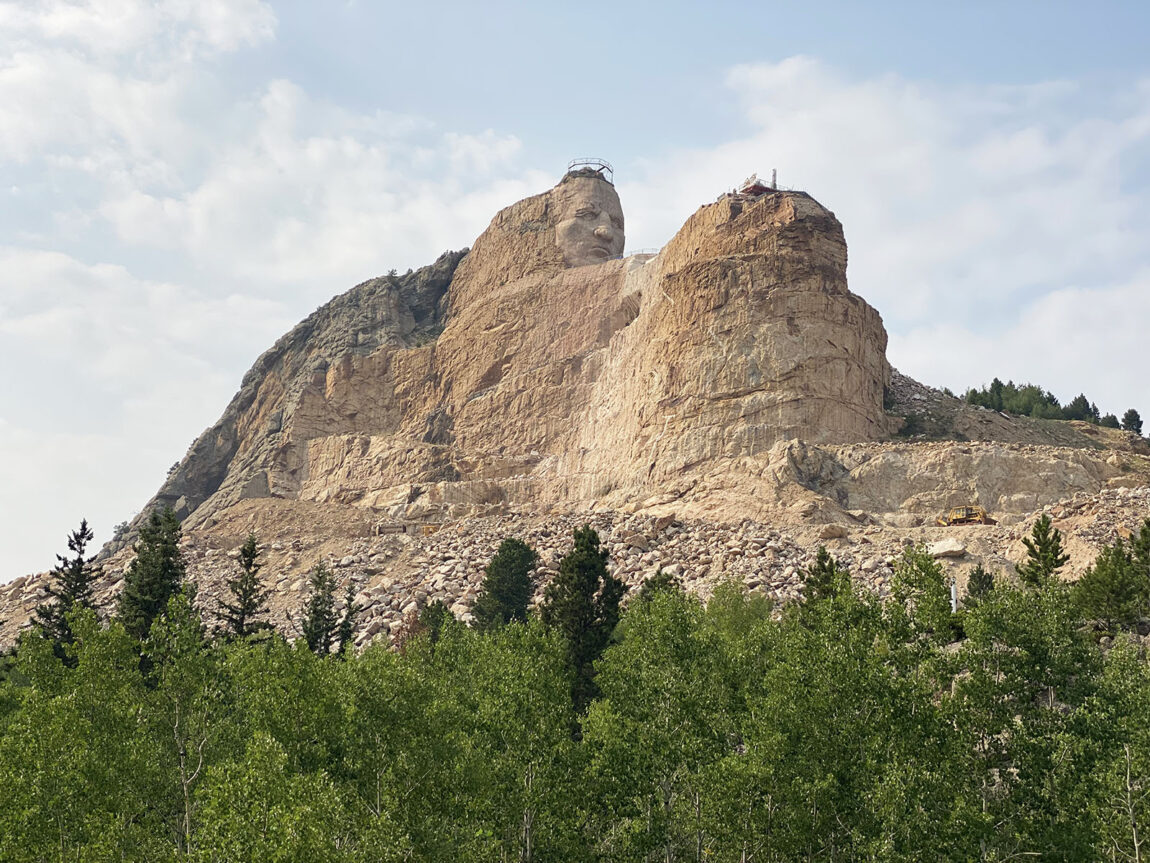 The Crazy Horse Monument, South Dakota, gives you the chance to have access to one of the best Native American cultural experiences in the country.

It’s always been about some version of cowboys vs Indians bouncing around my head. Some of my earliest memories were dressed up from head to toes in full Washington Redskins gear cheering the team on against the hated Dallas Cowboys. As I’ve grown older, this theme has played out time and time again leading to a love of all things Native American; eventually leading, in my opinion, to one of the most fascinating people in history – Crazy Horse. Coming to this memorial you are witnessing history in the making.

Crazy Horse is one of those figures in history that make other men look insignificant – a person who put the needs of his people above his own eventually leading to the ultimate sacrifice. I’ve always been fascinated by these larger-than-life heroes, who grow to mythic proportions in one’s imagination. It’s only appropriate that when we arrived at the memorial, we saw the most ambitious sculpture – Crazy Horse literally being carved out from a mountain. Simply put this was a jaw dropping moment. While you only have his head and top of his arm carved, it’s impressive to see how the mountain is transforming into a hero mounted on his horse pointing the way for his people.

Who was Crazy Horse?

Crazy Horse, born as a member of the Oglala Lakota tribe about 40 miles away from the current memorial site, lived during one of the most tumultuous periods of the American West. His story, that of war, leadership, and ultimately betrayal, is quintessential to the history of the West.

His most famous moment in history was the Battle of Little Big Horn which, in 1876, Crazy Horse shined in all his warrior glory leading a band of Lakota against Custer’s Seventh U.S. Cavalry battalion. Thanks to his leadership, the battle was a victory for the Lakota people – Custer and 289 others lay dead versus only 32 Indians. This was considered the biggest defeat ever to the United States Army until the 20th century.

To do the man justice, I recommend you read this excellent book, The Journey of Crazy Horse: A Lakota History, written by a member of the Oglala Lakota. The museum itself has a great summary about Crazy Horse’s life and what he meant to both his people, and the West on their website.

When Chief Henry Standing Bear and other Lakota Chiefs partnered with sculptor Korczak Ziolkowski to begin work on the memorial, Ziolkowski had to rely on the descriptions from surviving members of the Battle of Little Bighorn. Crazy Horse was infamous for refusing to have his picture taken; like others he believed the camera stole a person’s soul.

Read blog: What to see at Mount Rushmore: 8 things you can’t miss

The Crazy Horse Memorial represents a hero for Native Americans, carved out of their sacred hills of their own accord. It is no accident the memorial is juxtaposed so closely to Mt. Rushmore – Chief Standing Bear proudly stated to Ziolkowski “My fellow chiefs and I would like the white man to know that the red man has great heroes also.”

In accordance with both Chief Standing Bear and Ziolkowski, the memorial has created a scholarship fund for Native Americans. Thus, the memorial is not just a sculpture but a key actor in the community.

What you can do 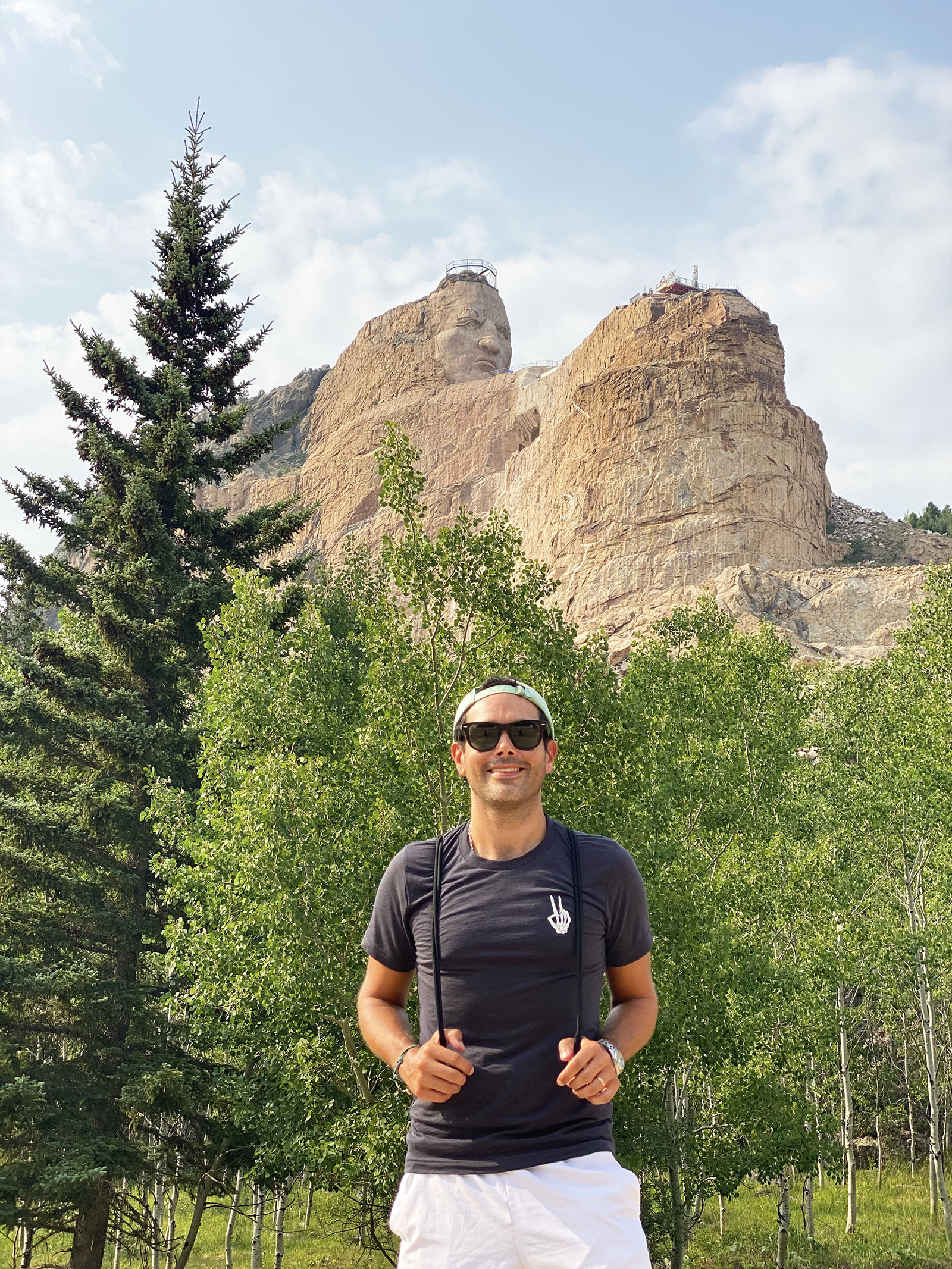 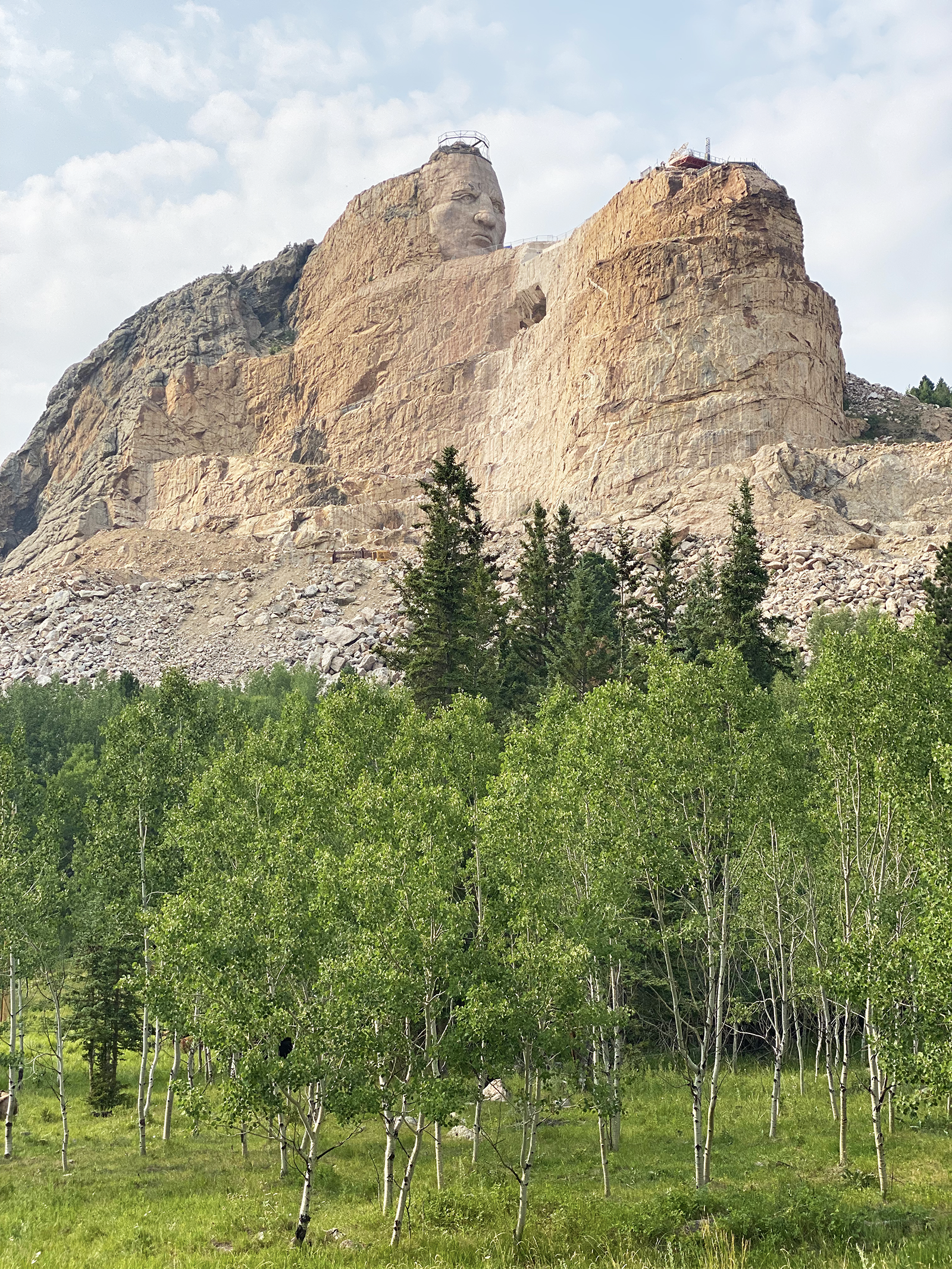 There’s lots of stuff to do on the memorial grounds, so take some time to explore.

Take a bus to get closer to the memorial: Take a bus to get to the bottom of the mountain and get a close-up view of Crazy Horse. The cost is $4 per person and it’s approximately a 25 minute round-trip. This is also a great opportunity to learn plenty of interesting facts about the Memorial.

Visit the Native American Educational and Cultural Center: This on-site museum (built directly from rock blasted off the mountain during carving) features lots of original artifacts from all Native American tribes and nations. Personally, I loved this museum as I could see the actual headdress of Black Elk, weapons used by warriors during Little big Horn, and cultural items from all over the North America. What really surprised me was the number of original items that were exhibited throughout the museum. On top of museum you’ll have plenty of hands on cultural activities such as storytelling sessions, traditional dances, and learning to play traditional instruments. 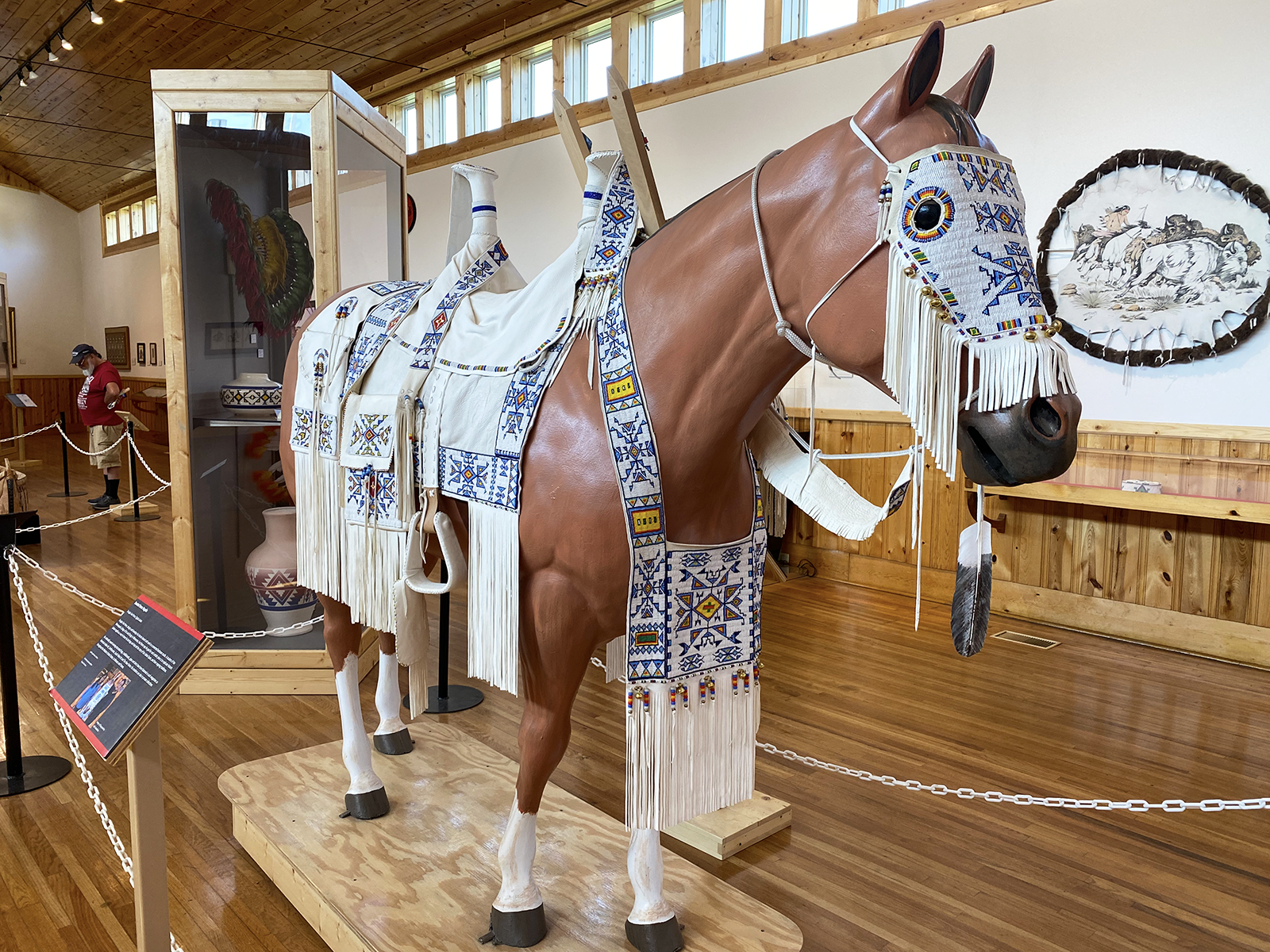 Visit Ziolkowski carving gallery: For those how are interested in the work and life of Ziolkowski, you can visit his carving gallery, which further memorializes Native American culture, or stop by the original log home called the “Big Room”.

Enjoy the Legends in Light Laser Show: If you are visiting the Crazy Horse Memorial between May 28, 2021 through September 30, 2021 enjoy a laser-light show which uses the Mountainside as a giant 500-foot “screen”. In addition to featuring colorful animations, the show features sound effects and laser beams choreographed to music.

Will Crazy Horse Memorial ever be finished?

Yes…one day! The current plan’s focus for the next 5 years is finishing the head, half the hair, shoulders, part of the chest, the extended arm and the horse’s head. However, this is an ideal plan if weather and funding cooperate.

The entire memorial is funded by public donations, this includes the administrative costs of running the park, the museum, and the work on the sculpture itself. This is the main reason as to why the sculpture has taken so long to complete; the other is due to the immense amount of rock they had to blast in order to start sculpting. All fees in the park – from entrance fees to bus rides – go directly to the operation of the memorial. As you can imagine, taking federal funds would be a betrayal to both Crazy Horse and the Lakota, so any little extra you donate is an immense step towards completion.

While Ziolkowski has passed away, his family has continued on his legacy in sculpting the memorial and ensuring the same principles are continued to be followed.

How long does it take to go through Crazy Horse Memorial?

You can spend quite a bit of time here as the memorial offers a variety of museums, tours, and events. Expect anywhere from 1-3 hours depending on the event schedule.

Tip: Events are all based around local Native American culture and history. You can enjoy special events, daily shows, cultural workshops and more.

Admission to the memorial is about $30, depending on how many people are in your vehicle when you pull up. The memorial’s website has a breakdown of cost, and the entrance fee is good for a readmittance to the memorial grounds that lasts up to three days.

Tip: The bus ride around the memorial is not included, but it’s only $4 per person extra. The guided van tour is a $125 per persona but is a charitable donation used to finish the monument.

The memorial is open year-round and usually from 8am-9pm. However, the times can change due to time of year and or events. Make sure to visit their website to get a detailed update.

We are part of several affiliate programs including Amazon and Viator which means that we will earn a small commission at no extra cost to you if you make a purchase through the links included in this blog.

Top things to do at Arches National Park, Utah

Devils garden trail in Arches National Park: The best hike in the park

What to see at Mount Rushmore: 8 things you can’t miss

Cathedral Spires trail: What you should know before you go