A tour to Delos island, Greece 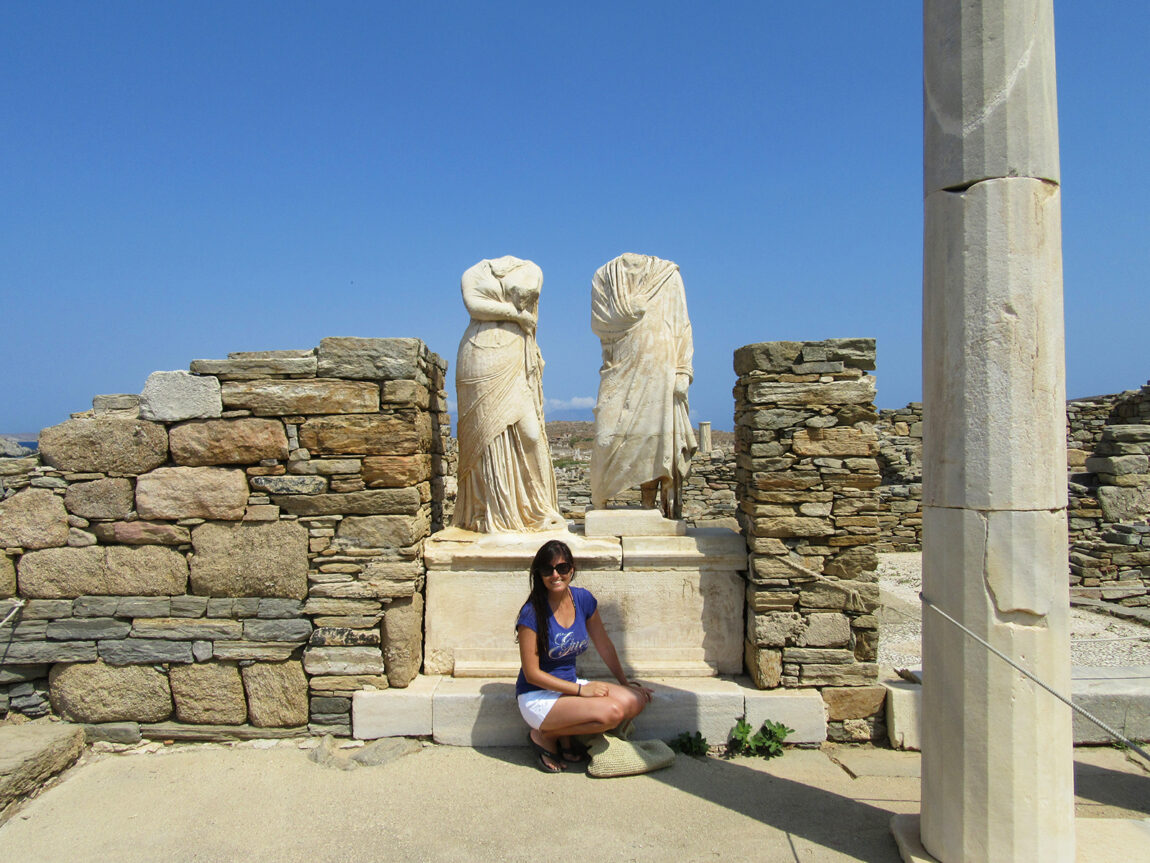 Floating lazily on the Aegean Sea, a tour to Delos island, Greece, is a perfect destination from trendy Mykonos.

Delos, an island full of mysticism, and a deep history. Considered to be the birthplace of the twin gods Apollo and Artemis, an island so famous it was featured in Homer’s Odyssey, and the location of the legendary treasure of the Delian leagues, founded to defend Greece from Persian incursion.

With so much history behind Delos, the island is entirely designated as a UNESCO world heritage site; it’s magnificently preserved, and you’ll immediately be transported to the height of ancient Greek civilization.

Delos is one of the best-preserved ancient sites in Greece, and it is widely considered one of the most important archeological sites in the world. I’m a massive history nerd, especially when it comes to ancient Greece, and the island did not disappoint.

Usually at a site you’ll find one or two ruins that are well preserved or frankly, you’ll see the foundations of a temple which has long disappeared into dust. It is very rare to find an entire island FULL of ruins in superb condition; so well preserved are these ruins that you’ll feel like you are transported back to their glory days. No other place on Earth boasts monumental structures from the three most important eras of Greece – the Archaic, Classic and Hellenistic periods. In other words, you are spanning thousands of years of history in just one visit.

As the Greeks like to say, Delos is history itself.

Delos is easily accessible by boat from Mykonos, weather permitting, with trips available every day. If you are island hopping during the summer, you can find round trip service from Tinos and Naxos as well. The only way to get to the island is by boat, so take advantage and get the one of the seats on the top – there is nothing better than sailing the Aegean with salty sea spray cooling you down in the summer sun. 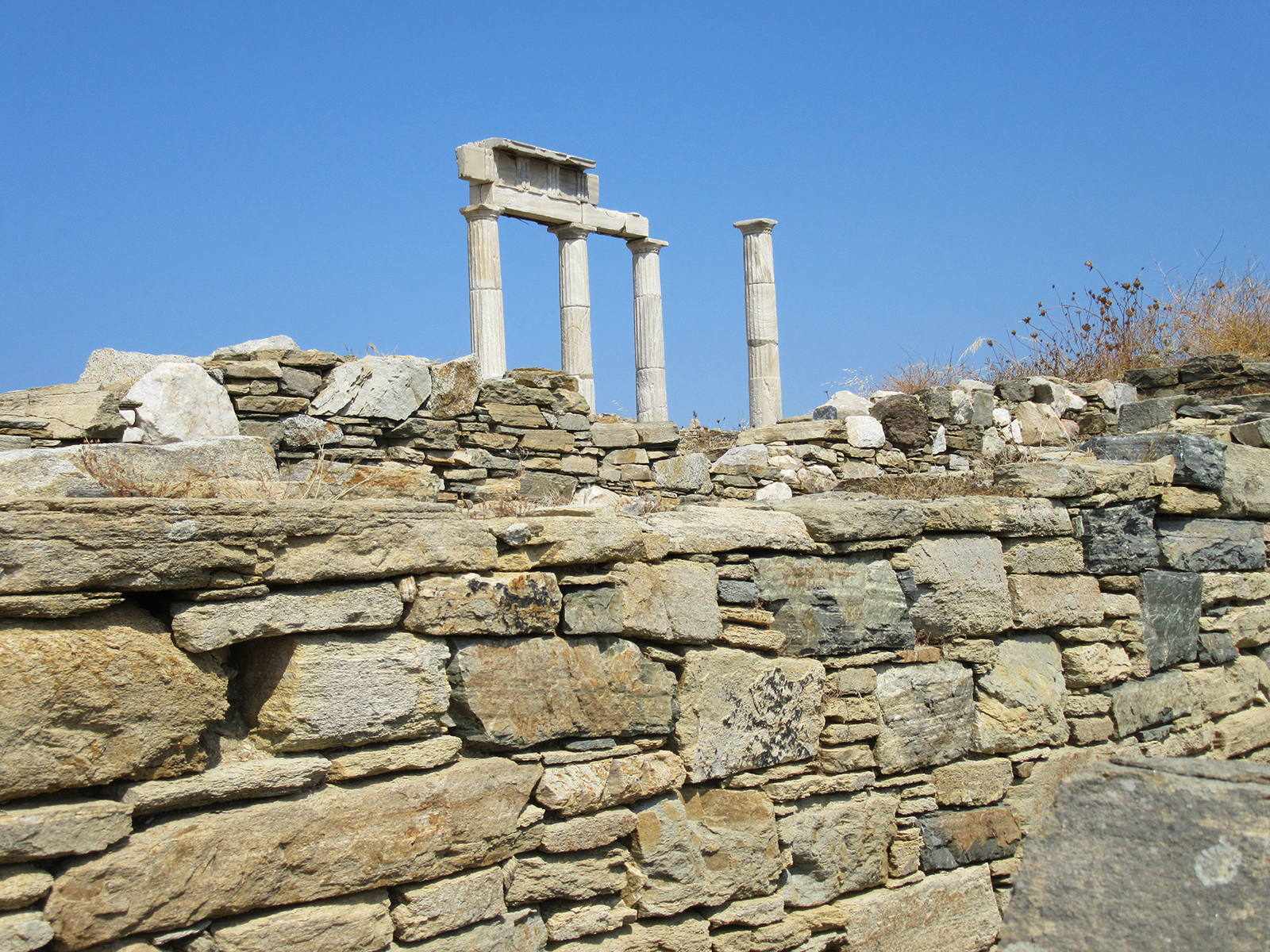 Obviously, you are here to visit some kick-ass ruins from the height of ancient Greek civilization. As I said earlier, the entire island is full of amazing historical artifacts and you really can’t go wrong in taking a guided tour or a self-walking tour. Frankly, there are many routes you can follow but this one below will help you get to the places worth exploring and getting the most iconic photos the island has to offer.

Delos Archeological Museum: A visit to the museum will provide visitors context to the sites around the island and only takes an hour to complete. Most of the artifacts on exhibit come directly from archeological sites from the island, giving a major significance to the the statues, mosaics and pottery on display.

Tip: The museum is not air-conditioned so it can get very hot inside. Early in the morning visits offer cooler temperatures.

Sacred Way / Apollo’s Sanctuary: In the Island’s heyday, this path was once a paved area lined with shops and stalls to greet visitors. As you enter the Sacred Way, through colonnaded porticos, the path leads you though a series of ruined temples dedicated to the god Apollo. While the majority of the spectacular statues that lined the area have been destroyed (and those which remained have been moved to museums) you can still read the inscriptions dedicating the statue to the god that date as far back to 3rd and 2nd centuries BCE. The carved lion heads that mark the path along the Sacred Way once spouted water and still survive to this day.

Avenue of the Lions: Dating back to the 7th century BCE, the Avenue of the Lions invokes the feelings of Delos’s glory days thousands of years ago. Keep in mind not all of the lions are original, as many are now placed in museums for preservation, however the replicas are very authentic – they are made of the same white marble found all over the island.

Temple of Isis: It is one of the most stunning sites on Delos because its façade has been restored to its former glory. The temple sits on top of a small hill, seen from the Archeological Museum, and you’ll have to take a short hike to reach it. The view, both as you ascend the hill and from the top is absolutely stunning; the spot is very popular so get there early. One of the more memorable shots you’ll have to take is of the headless Greek goddess standing in front of the temple ruins.

Tip: Many tour guides won’t take you to the Temple of Isis, it’s a can’t miss site especially for photo opportunities.

House of Dionysus: The “residency” of the god of wine (among many other things) on the island easy to spot, due to the towering columns that can be seen above the remnants of the houses’ wall. At the site you will see one of the most famous depictions of the god – a large mosaic of Dionysus riding a tiger with its wings outstretched, carrying a wreath of ivy and a vine of grapes around his neck, is prominently displayed.

Mount Kynthos: Hiking up the mount will allow you to “walk in the footsteps of Apollo”, as it is the birthplace of the twin gods – Apollo and Artemis. Standing at 120 meters, it marks the highest point on Delos, granting visitors a stunning view; from the top you’ll see many surrounding islands including Mykonos, Naxos, Paros, Syros, and Rhenia. The hike is not a difficult one, but you will need to be prepared. Make sure to bring proper shoes (no flip flops) and plenty of water.

The Sanctuaries of the Foreign Gods: Located on the slope heading to Mount Kynthos, you’ll find the sanctuaries on many tour-guide routes. The site is split into 2 areas, each one dedicated to either Egyptian or Syrian gods that were worshiped to a variety of extents during ancient Greece. One of the most noteworthy finds was a statue of Poseidon, god of the sea, earthquakes and horses, signifying the panhellenic world.

Tip: As I said there are so many sites to visit, it’s worth spending the entire day on Delos. If you do, make sure you also stop by Cleopatra’s House, the House of Masks, and the Agora of the Italians.

You’ll want to pack the following gear to really enjoy the trip to Delos.

Comfortable shoes: While we went with flip flops, you will be doing a good bit of walking. Remember, while it’s hot out, all of the Greek islands have rocky terrain, so have some comfortable hiking shoes for the trip.

Tip: If you bring a backpack, keep a pair of flipflops for the boat ride, especially if you sit on top – it gets wet from the sea spray.

Sunscreen: You will spend the entire time outside, and as with other Greek islands, shade is scarce. Bring Supergoop! to protect your face and also Coppertone for your body.

Swimsuit: As you’ll be both on a boat and spending hours on an island, make sure to pack a swimsuit. Not only will you dry quickly if you get wet on the trip, but you can catch some rays on an island full of ancient Greek ruins.

Towel: This is one item we wished we brought. Whether to dry off from the hot sun or any water form the boat, a quick dry towel will go a long way during this excursion.

Hat: This is key, as you’ll be desperate for shade. Make sure to bring a hat to protect you from the sun so you can enjoy the entire day.

Water bottle: Bring a liter of water, which can be purchased before the boat departs from Mykonos. You’ll have the Aegean sun beating down on you for most of the day, with little reprieve. We recommend you bring the Nomader Collapsible Water Bottle, which rolls up for compact travel.

Tip: To get out of the sun, you can always ride inside the boat, however, make sure you don’t close the bathroom door. I got locked in and spent a good 10 minutes screaming my lungs out for help until my wife, who finally realized I was missing decided to look for me. Who knows a few more minutes and this humble blogger would have been a goner.

Things to do in Hallstatt: Austria’s picture-perfect village

Hiking from Fira to Oia in Santorini: What you need to know