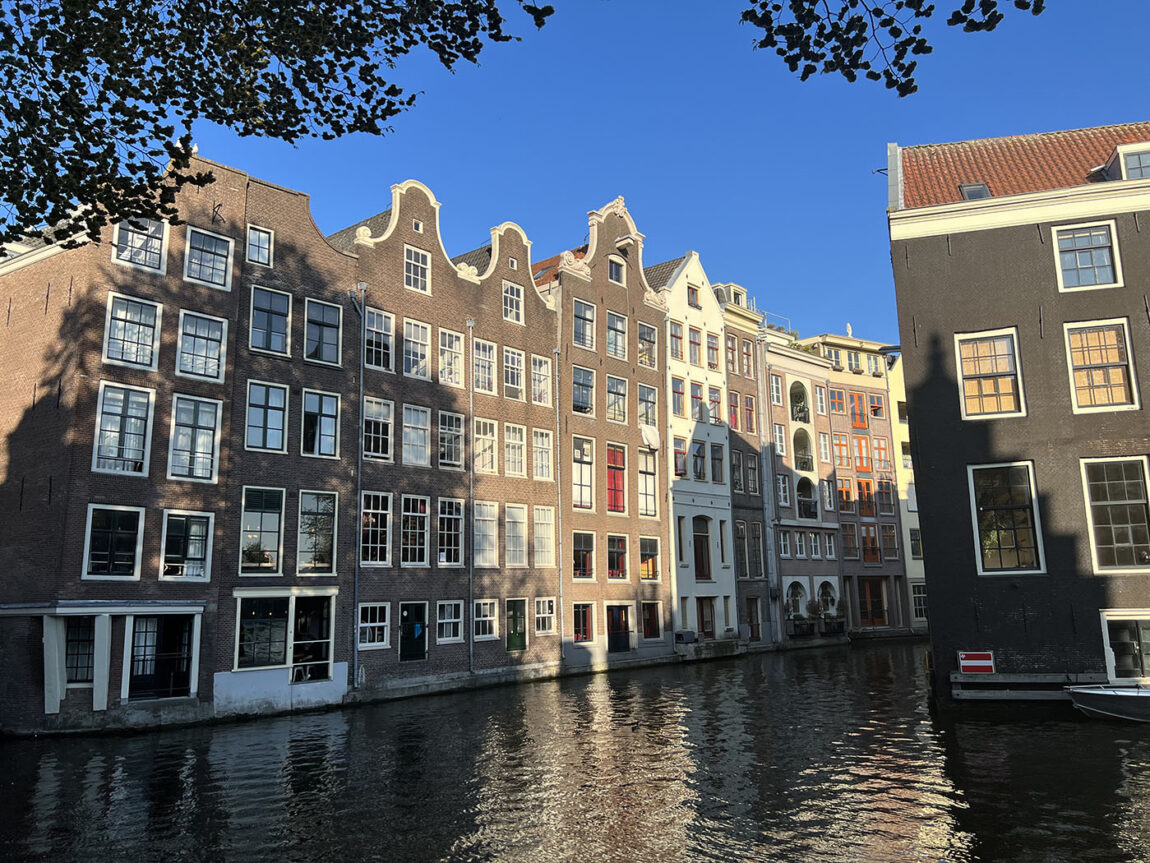 Check out the best photo locations.

Amsterdam is among the most photogenic cities in the world, highlighted by its picturesque canals. Amsterdam has been called the “Venice of the North” due to its famed canal ring – which no matter the time of day it is extremely photogenic – and is one the country’s UNESCO World Heritage sites. It’s impossible to travel to Amsterdam and not end up taking hundreds of photos. The city is home to 165 canals, each oozing their own unique charm and telling a story worth photographing.

Tip: When photographic the canals, try including the reflection of the houses on the water – it will make your photo more impressive. The reflection is better in the early morning when there are no boats displacing the water.

You can imagine in such a city bubbling with tourists, that trash may be in the canals, however, Amsterdam canals are much cleaner than in the past. Amazingly, despite the city’s efforts, between 12,000 and 15,000 bikes are pulled from the canals every single year!

Amsterdam’s weather is very unpredictable and can change in the blink of an eye – making each photograph that much more special. The first day we got to Amsterdam the sky changed from a deep blue to totally gray and threatening rain in a matter of hours. I don’t really like sightseeing in the rain but the stormy backdrop of the sky produced some beautiful photos of the canals. 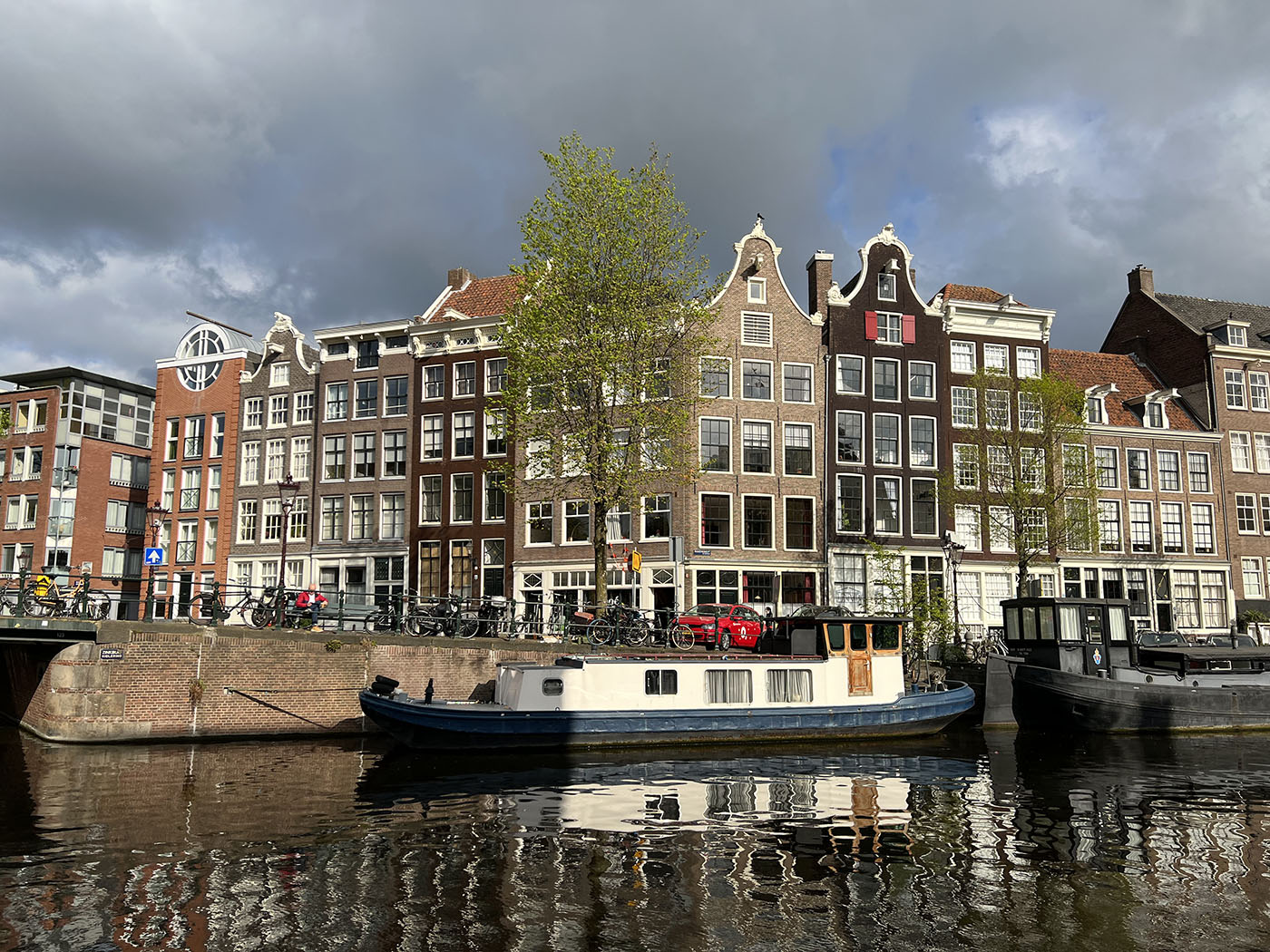 You can explore the canals a few ways – by foot (or bike), by boat, or houseboat.

Did you know that canal cruises take more than 3 million passengers per year? That’s right – no visit to Amsterdam is complete without enjoying a canal cruise. Canal cruises will give you a chance to explore Amsterdam from the water giving you a totally different perspective. You will pass bridges, crooked houses and witness amazing architecture. Night canal cruises are also wonderful as you will be able to see the city lit up. If you can, take both day and night cruises. Keep in mind there are different types of cruises, but we recommend one with the bar fully stocked.

Note that some cruises offer the chance to hop on and off next to the main attractions while others have a set route but will let you enjoy traditional Dutch cuisine while cruising. Take your pick. 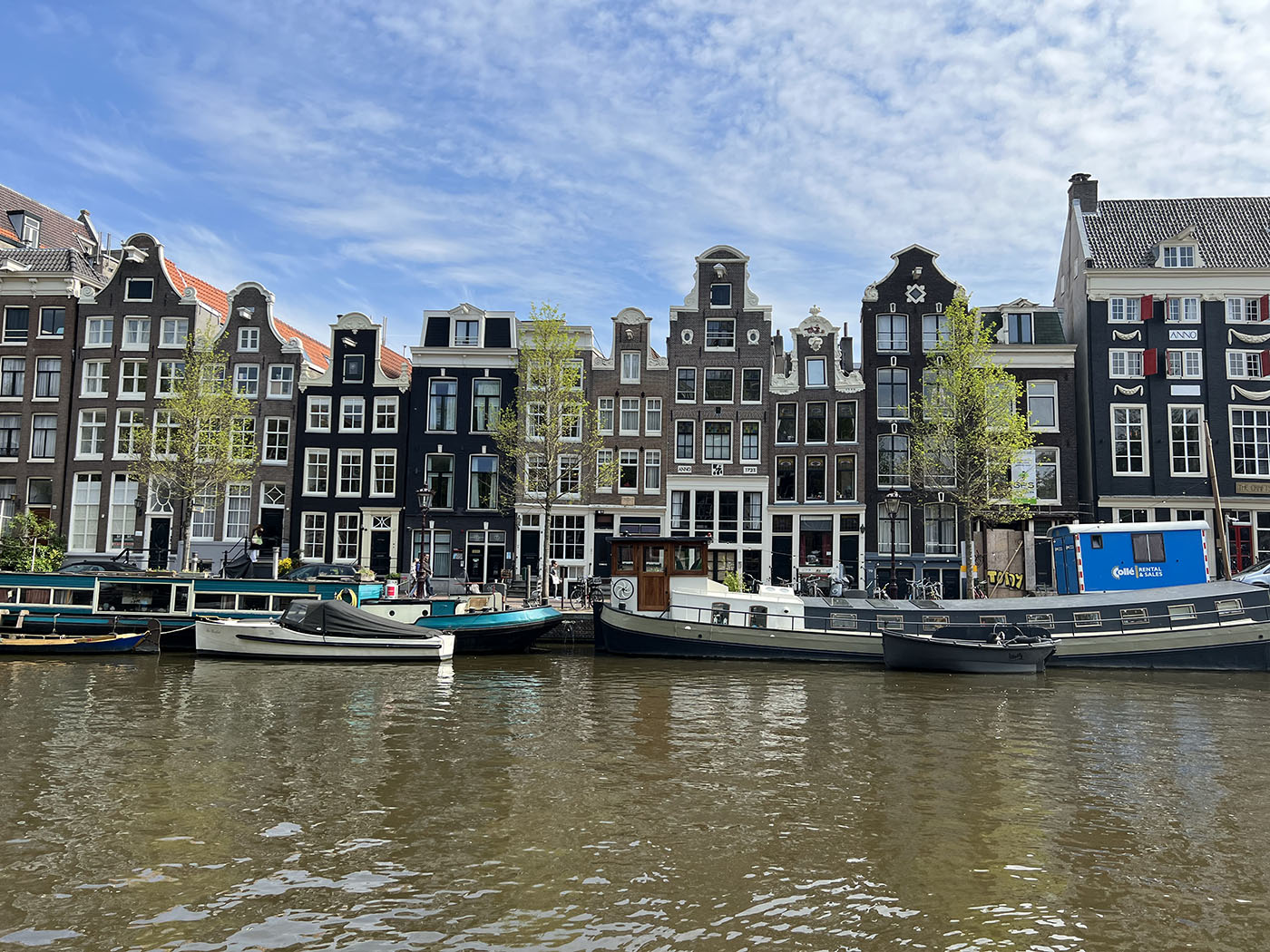 Have you ever wonder how it is to live in a houseboat? It is estimated that there are nearly 2,500 houseboats in the city, with many of them offering amazing views of the canal belt and crooked houses. They are easy to find as they are docked along side most canals.

Some of them can also be booked as accommodations, so you will truly experience “life on the water” the Dutch way. Don’t worry, most of these boats have modern amenities – expect to have running water, electricity and heating. The houseboats with the crooked houses in the background will give you a chance to get amazing photos – see if you can find the most colorful!

Below are some locations perfect for photographs that shouldn’t be missed and are easily accessible through the main streets:

Intersection between Leidsegracht and Keizersgracht 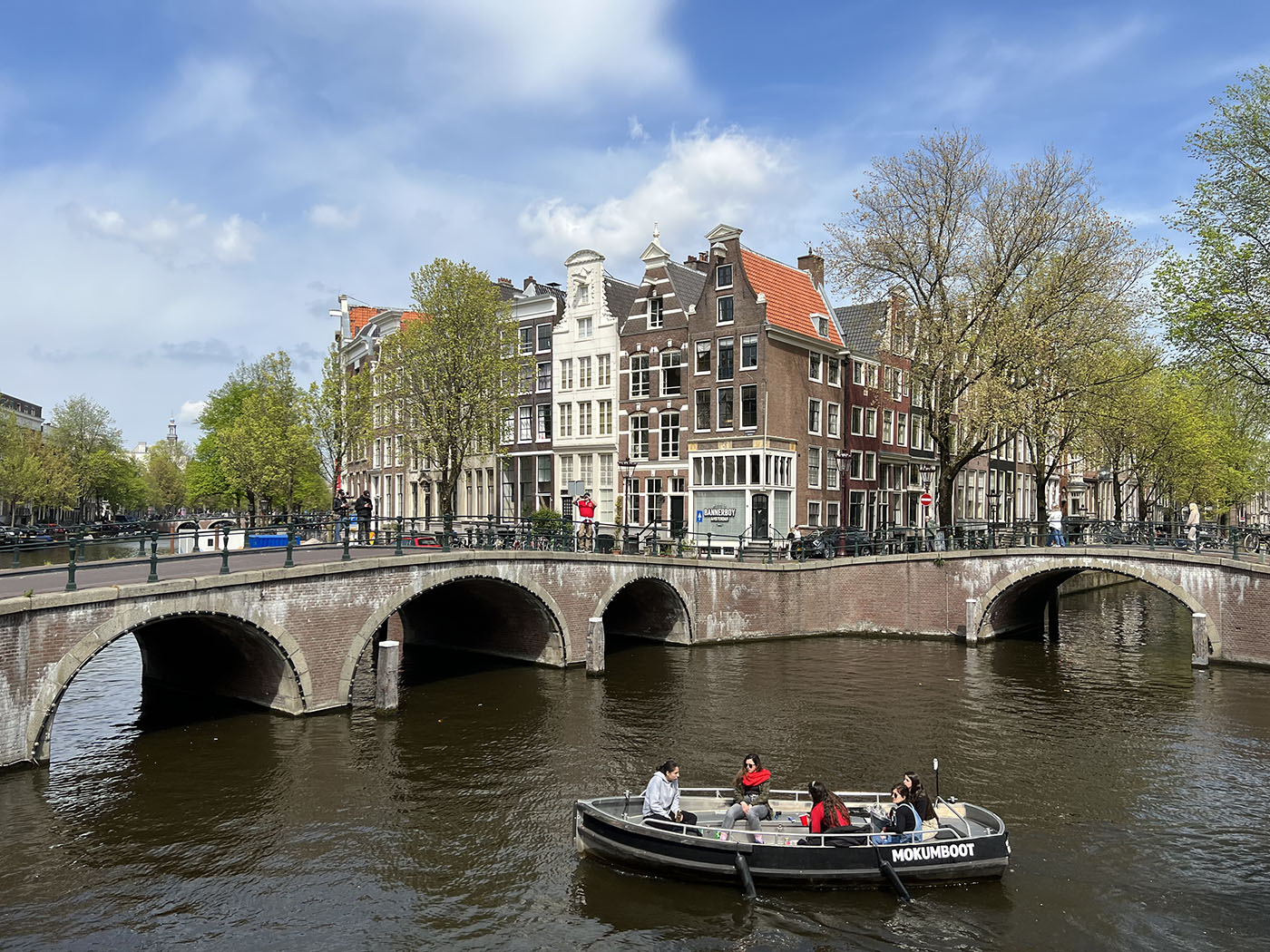 Among my favorites spot is the intersection between Leidsegracht and Keizersgracht. This intersection allows you to capture the crooked house as well as the two bridges. If you can, wait for a boat to pass by (there is one passing by every couple of minutes) to capture it on the photo as well. This spot is literally a postcard, as you can find photos sold in souvenir shops across the city.

One canal that I loved is Prinsengracht. There are several attractions throughout this canal including Anne Frank’s House and the Westerkerk. Do not forget to take a photo of the canal including this church in the background. If you get here early and are lucky with the sun, the reflection of the church and houses in the canal will give you an unforgettable photo. 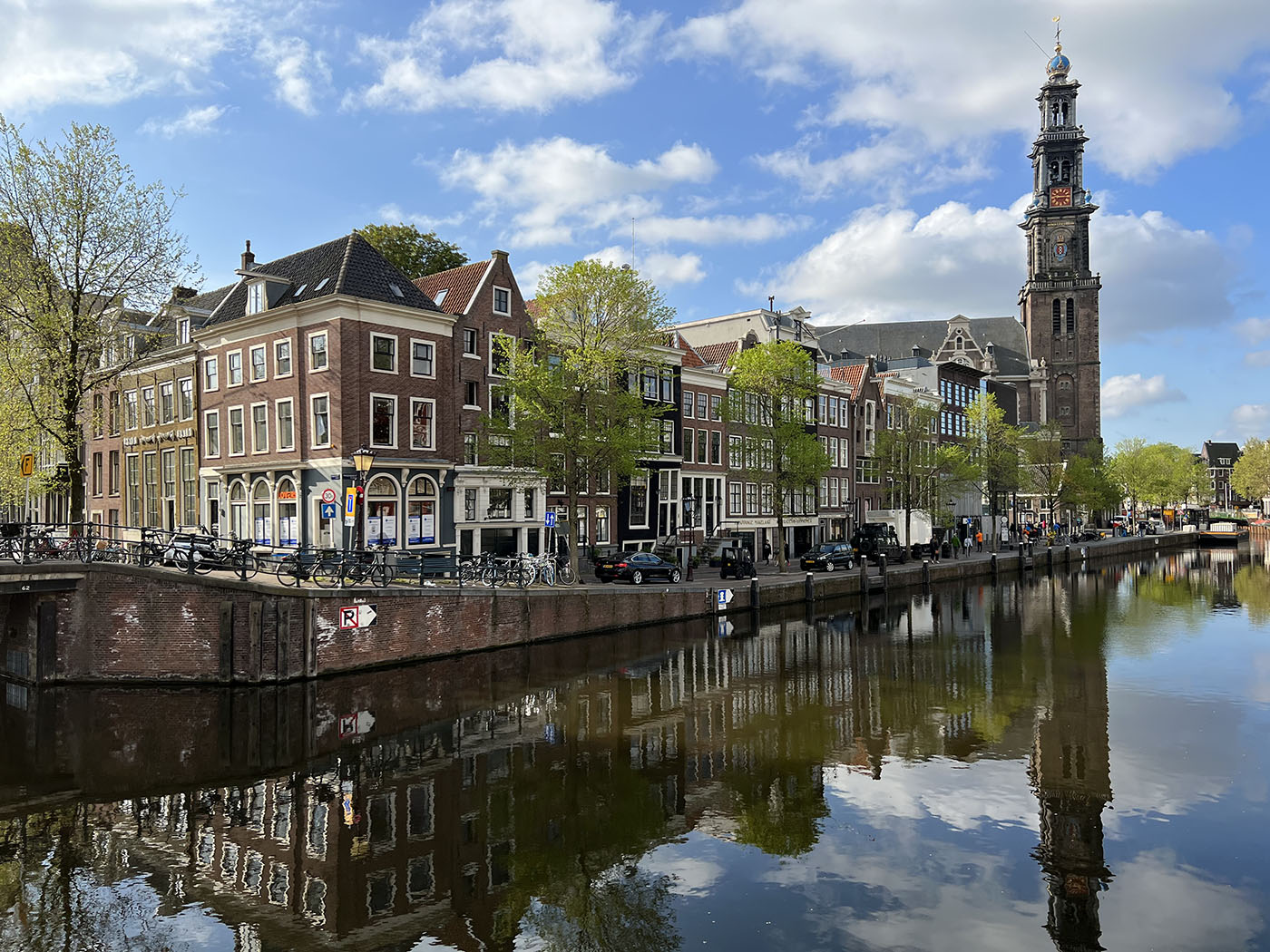 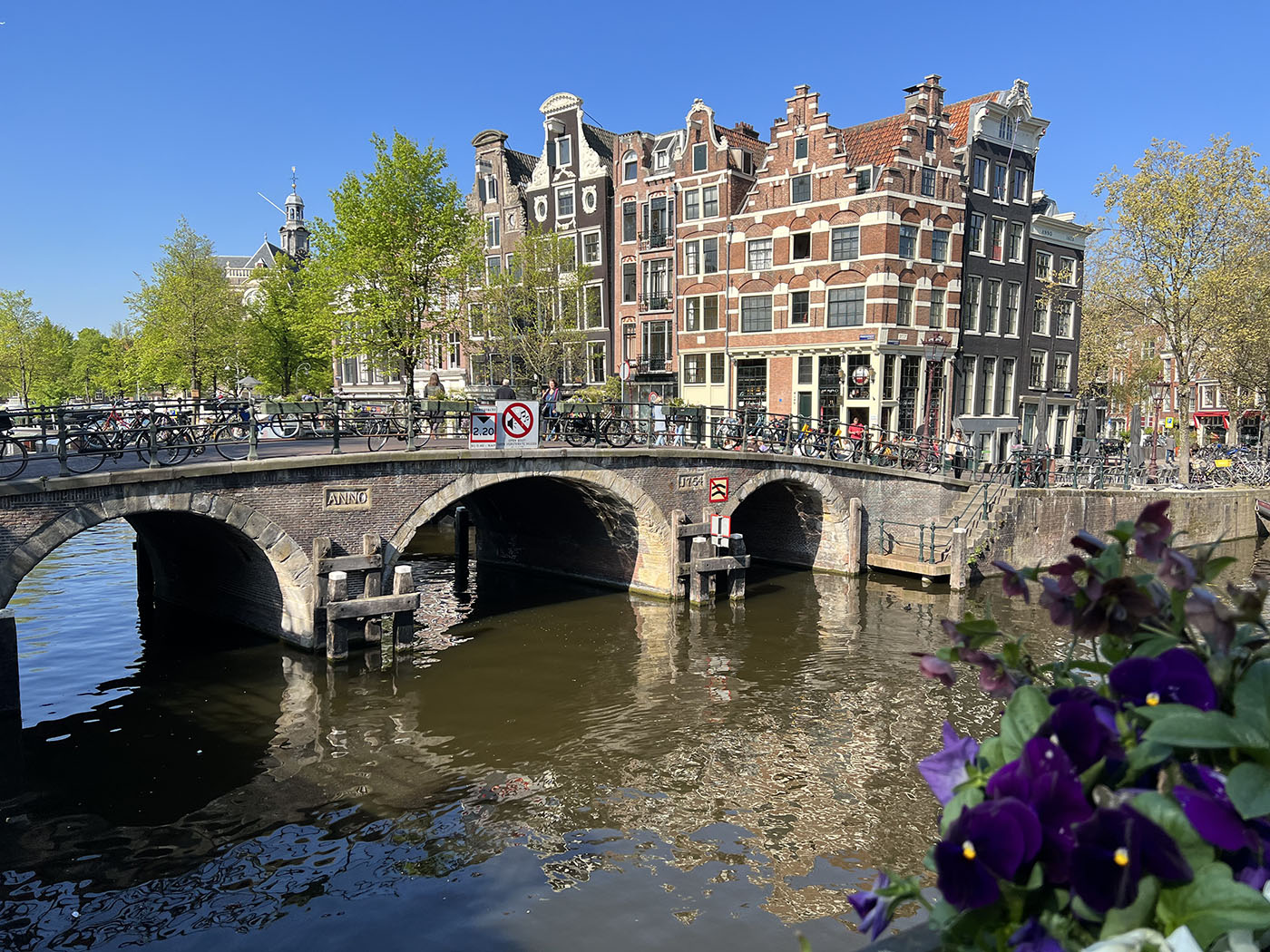 Additionally, you’ll find many cafés and bars along this street – at 5pm they all get packed for happy hour. 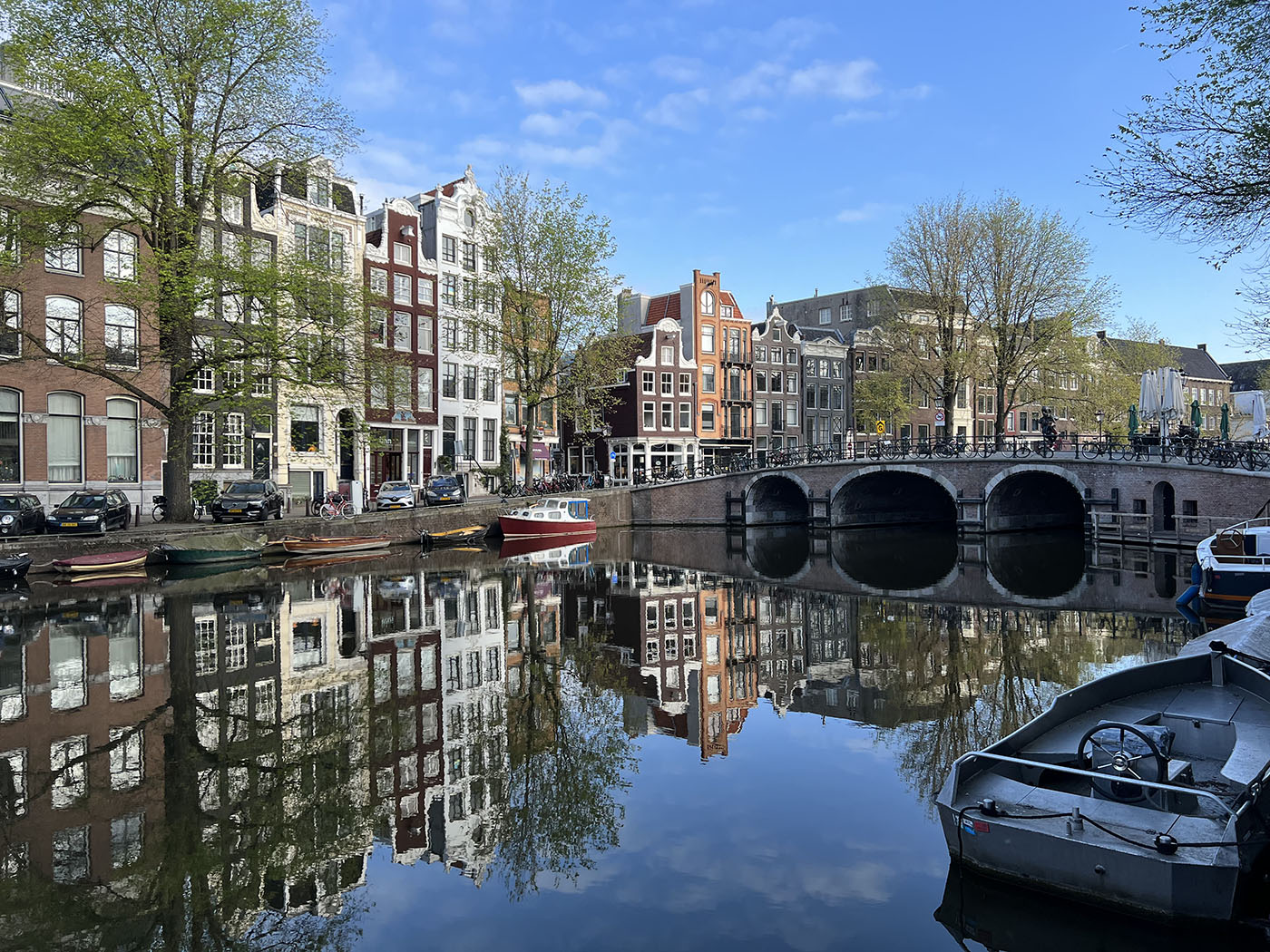 The Singel canal, originally established in the 15th century, is also worth visiting. With a length if 6.3 kms it is the longest canal in the city. In this canal you can find one of the smallest houses in the world (number 7).

Singel is best reached from Central Station as most of the cafes are on that end of the canal (do be careful with the tourist traps, but there are some hidden gems along the way). With its picturesque bridges and historic canal houses, Singel shouldn’t be missed while in Amsterdam.

When touring the Singel canal, make sure to look for the Torenluis. Torenluis is Amsterdam’s oldest and widest bridge. See if you can spot the barred windows at the base of the bridge – these windows belonged to a former prison which can still be visited. 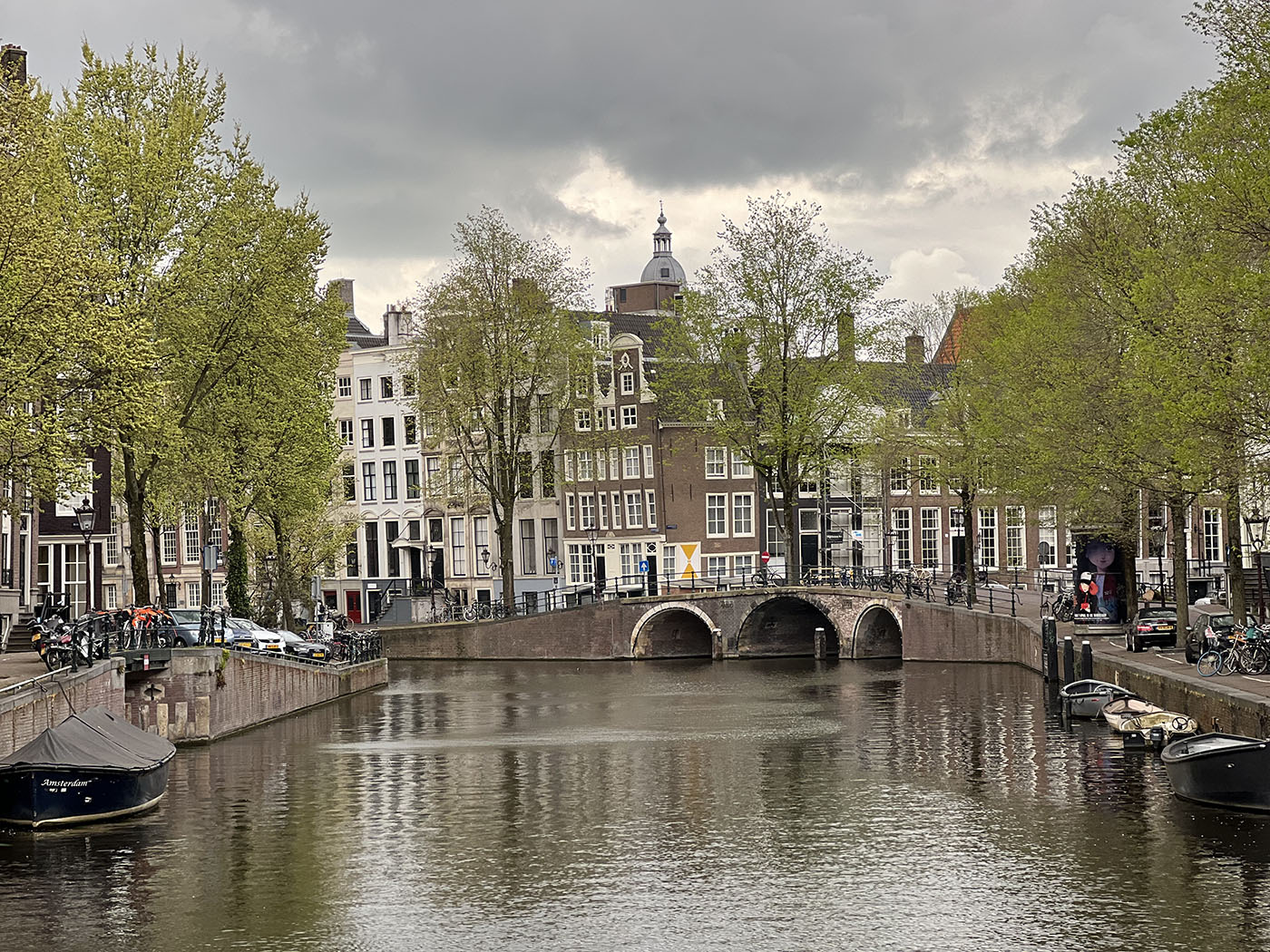 The Gentlemen’s canal is widely considered to be the most important canal in Amsterdam as it was home to the richest merchants, mayors, politicians, and the most influential citizens during the 17th century. This was such a prestigious address, the head office of the Dutch West India Company was located on this canal to be close to power players of the city. Even today, the official residence of Amsterdam’s mayor is located right on this canal (number 502) along with a variety of museums, galleries, and over 400 houses listed as national monuments. Stop by at house number 386 to visit the Museum of the Canals to learn about their history. 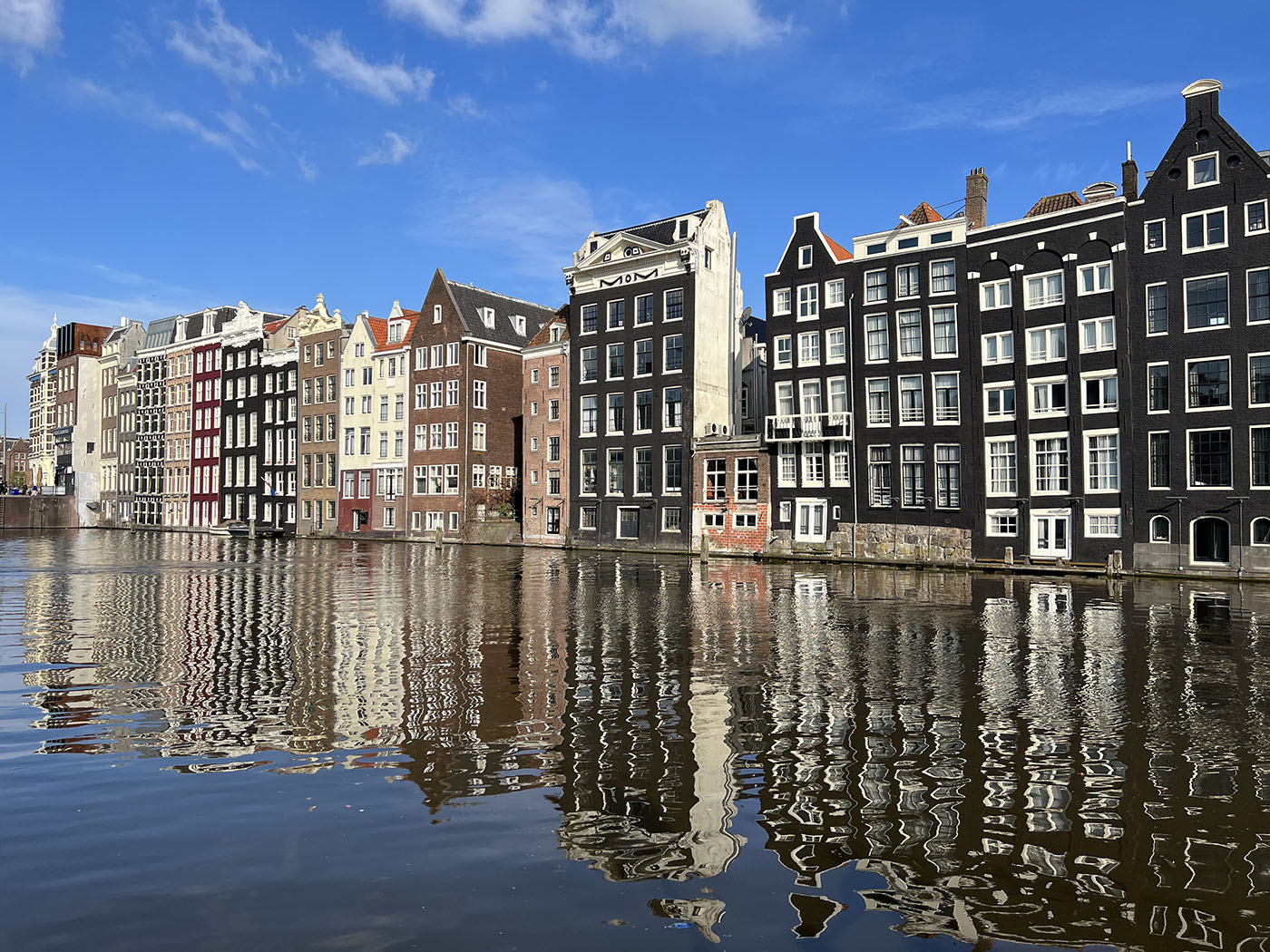 This is an amazing location found close to Dam Square and Central Station. A postcard-perfect picture, Damrak is ideal for that iconic photograph featuring colorful and crooked houses along the water. I recommend you head to Damark in the afternoon as the sun won’t damage your photos during that time and it’s also the peak time to get the reflection of the houses in the canal.

From here there are quite a few canal tours that depart, so you can take your pick. There is one dock that’s always open where you will be able to get closer to the canal and take the photo above.

The Groenburgwal canal connects the Raamgracht with the Amstel. It offers a great location to photograph the Zuiderkerk – the first Protestant church in the city. 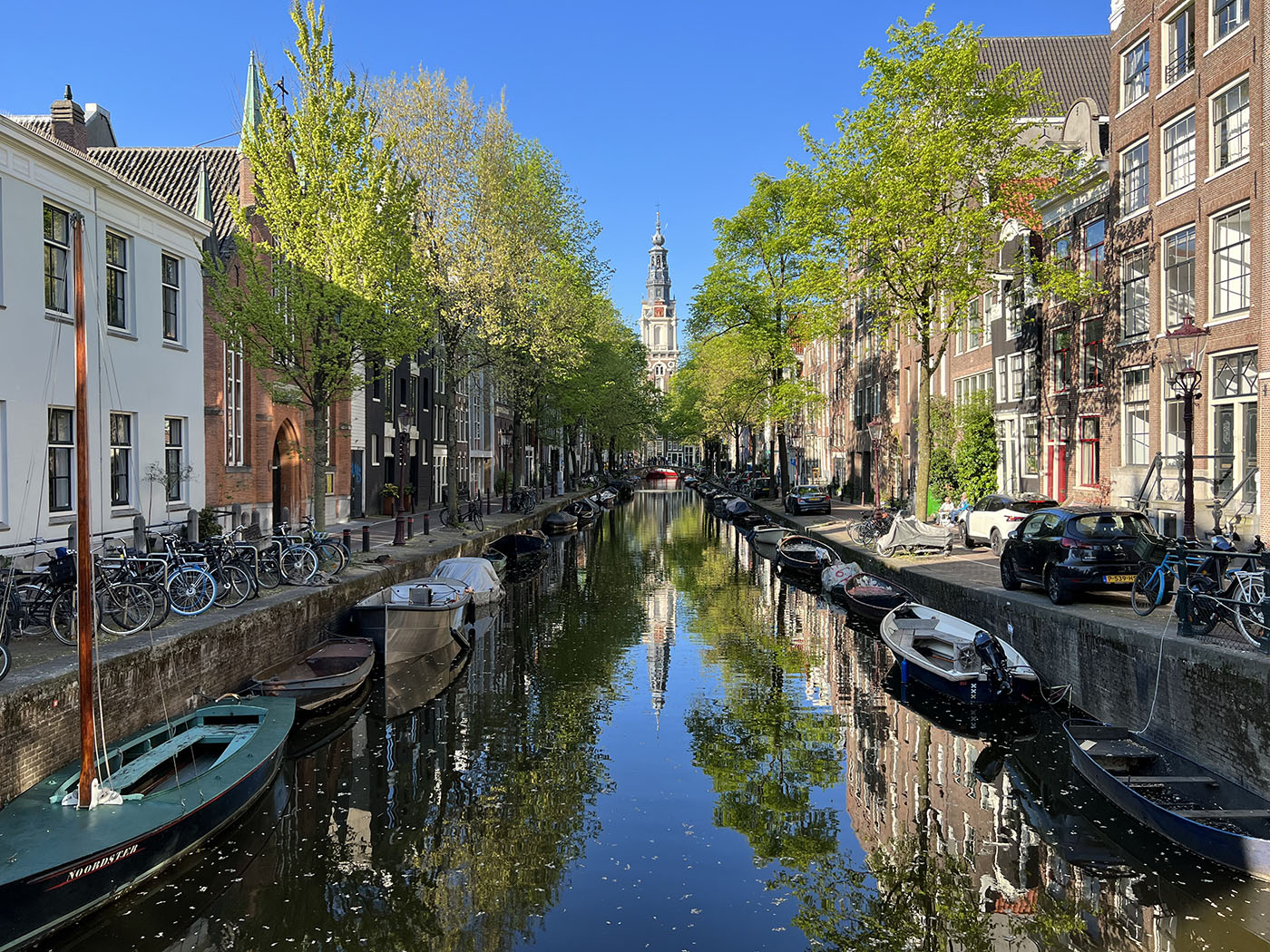 Best things to do in Leiden, Netherlands