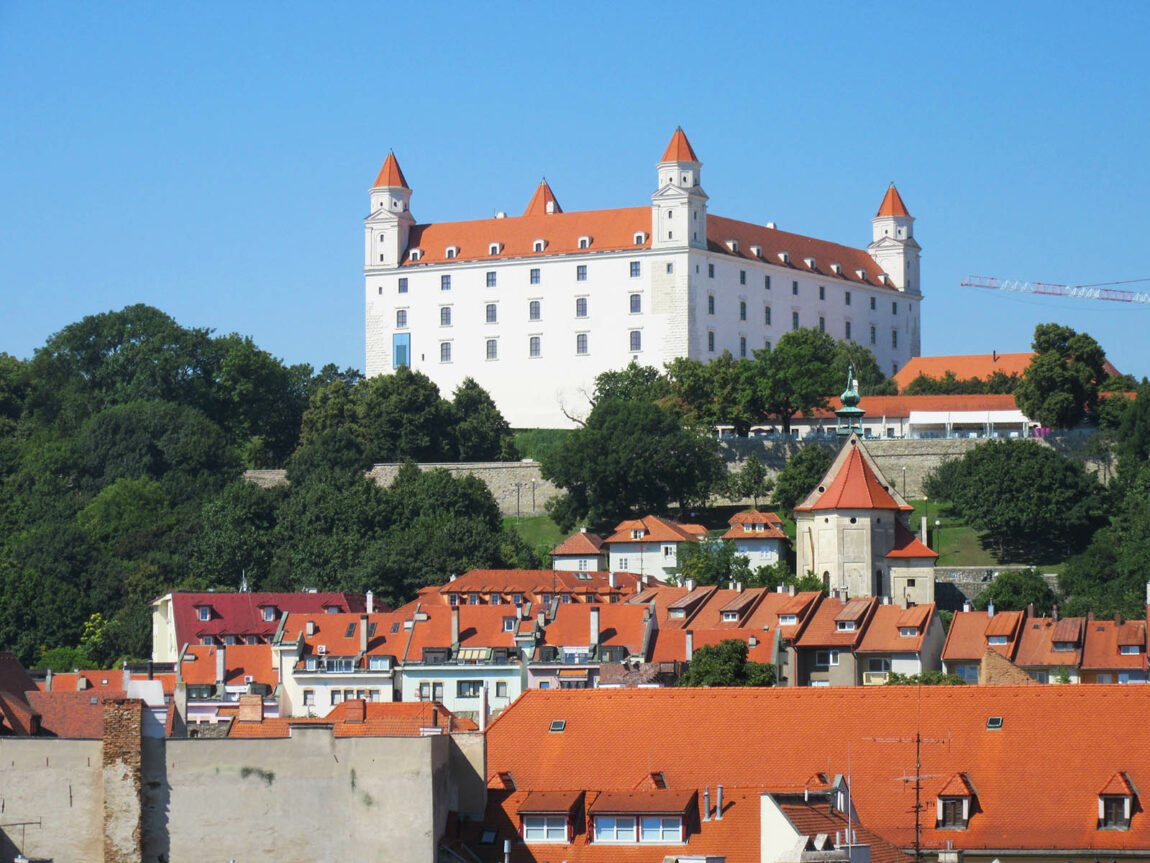 Take a look at what are the top Bratislava, Slovakia attractions you need to visit; and learn the best things you can do in this delightful capital.

At first thought, Bratislava might not be your typical destination when traveling to Europe. But if you are drawn to lovely Eastern European cities, those dominated by imposing castles perched over hills; narrow alleys and cobbled corners; and quaint cafes where you can idly see life go by, Bratislava is the best place for a day trip.

There are several reasons to visit this hidden gem – first and foremost, its old town is impeccably beautiful offering some of the best photo opportunities of the region. Bratislava is small, which makes it perfect for a day trip (like we did) allowing you to visit most of the top attractions in a short time.

It’s also a little bit over an hour from Vienna by train, so you don’t need to go too far out of your way. Bratislava is also really cheap compared to other European cities – which also earns additional perks as a city to visit when traveling.

There are tons of stunning views from rooftop cafes and restaurants, including from Sky Bar which offers our favorite view of the castle and city skyline. It’s not a surprise that many movies have been filmed in Bratislava – Eastern European charm mixing with a slow-paced life makes this hidden gem one of the regions most a delightful cities.

Here are the attractions you must visit when in Bratislava: 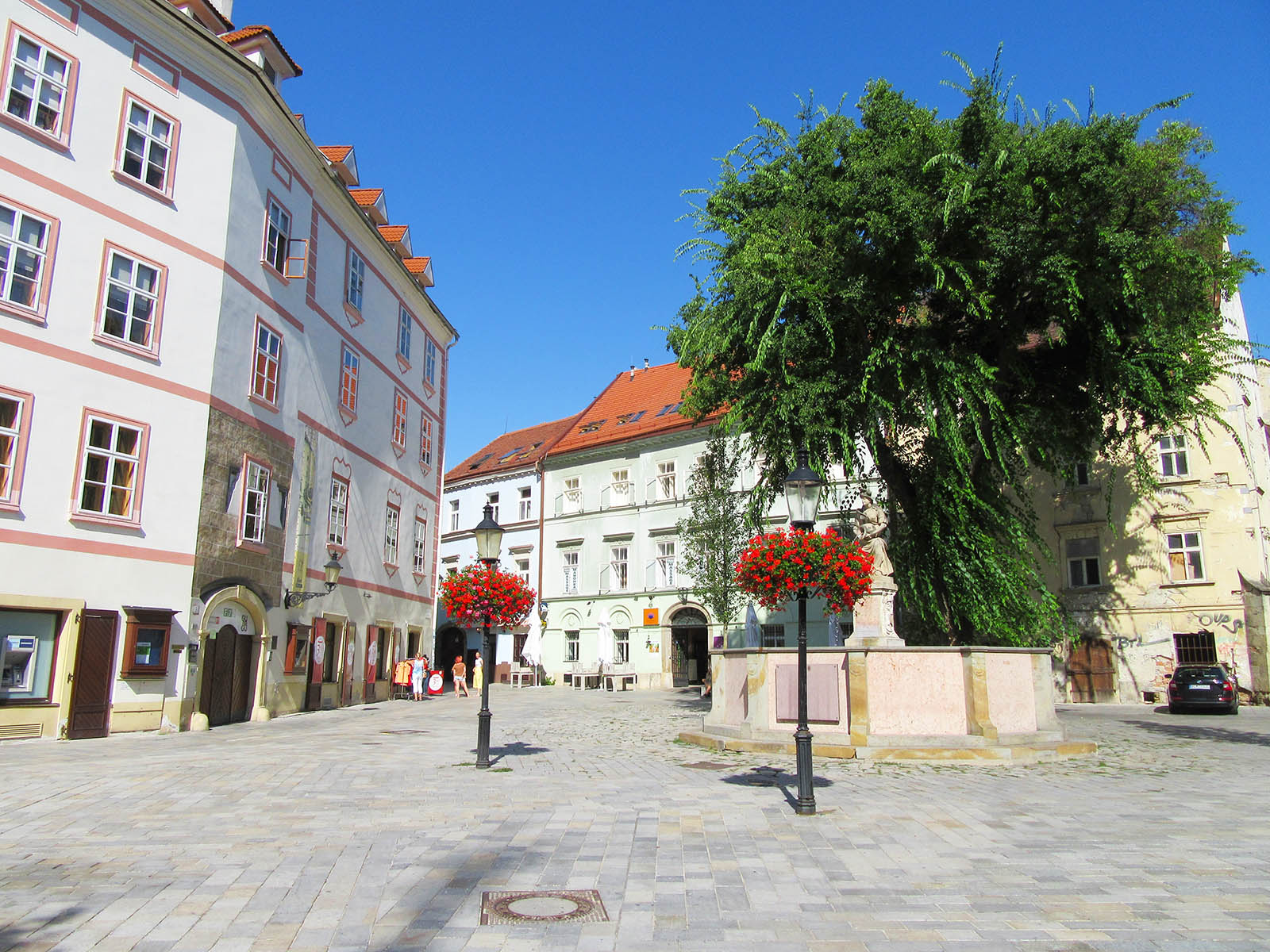 Originally the location of the city’s main marketplace, where locals gathered to welcome monarchs of old and casually enjoy some public executions, the main square is a must-see when in Bratislava. With stunning Eastern European architecture featuring imposing facades, delicate lanterns decorated with beautiful flowers, and a boon of artistic statues, the main square is worth a visit. Dotted with tiny cafés, take advantage to slow down by grabbing a cup of coffee, and soak in the main square – this is a perfect spot where you do not need to rush during a trip.

The square features the Roland Fountain – the most famous fountain in the capital. The fountain is adorned with a statue of the legendary knight Roland representing a constant defender of Bratislava, thus facing the town hall. There is a litany of folklore attached to this fountain, but the most famous legend states that once a year, precisely at the stroke of midnight at New Year, the statue of Roland will turn to bow in the direction of the former town hall, honoring twelve council members who died to protect the city.

If you visit around Easter you will be in for an even bigger surprise – Roland comes to life on Good Friday! On this date, the statue will move in broad daylight and wave his sword, Durandal, in four directions to show he is still protecting the city.

As mentioned, there are two town hall locations in the square. The Old Town Hall, one of the oldest (it was built approximately in 1370) stone buildings still standing in Bratislava, is the best of the two. The Old Town Hall houses the Bratislava City Museum, the oldest museum in the city which features an exhibit of the city history and some “lovely” torture devices.

No matter where you go in Europe there always seems to be a museum dedicated to torture devices, a grim reminder of humanity’s dark side. One of the best features of the building is the tower, where you can soak in magnificent views of the square from above as well as of the castle. 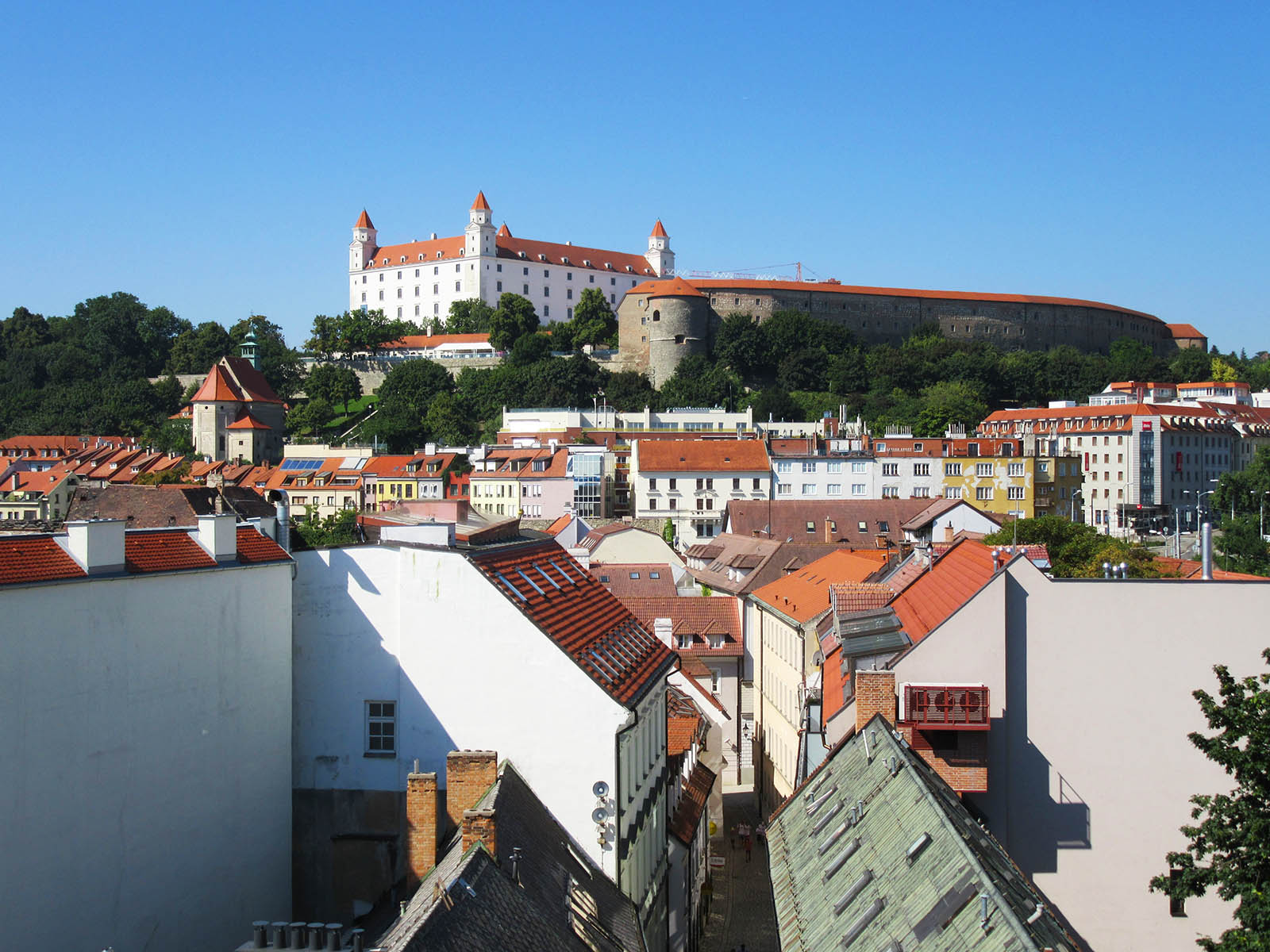 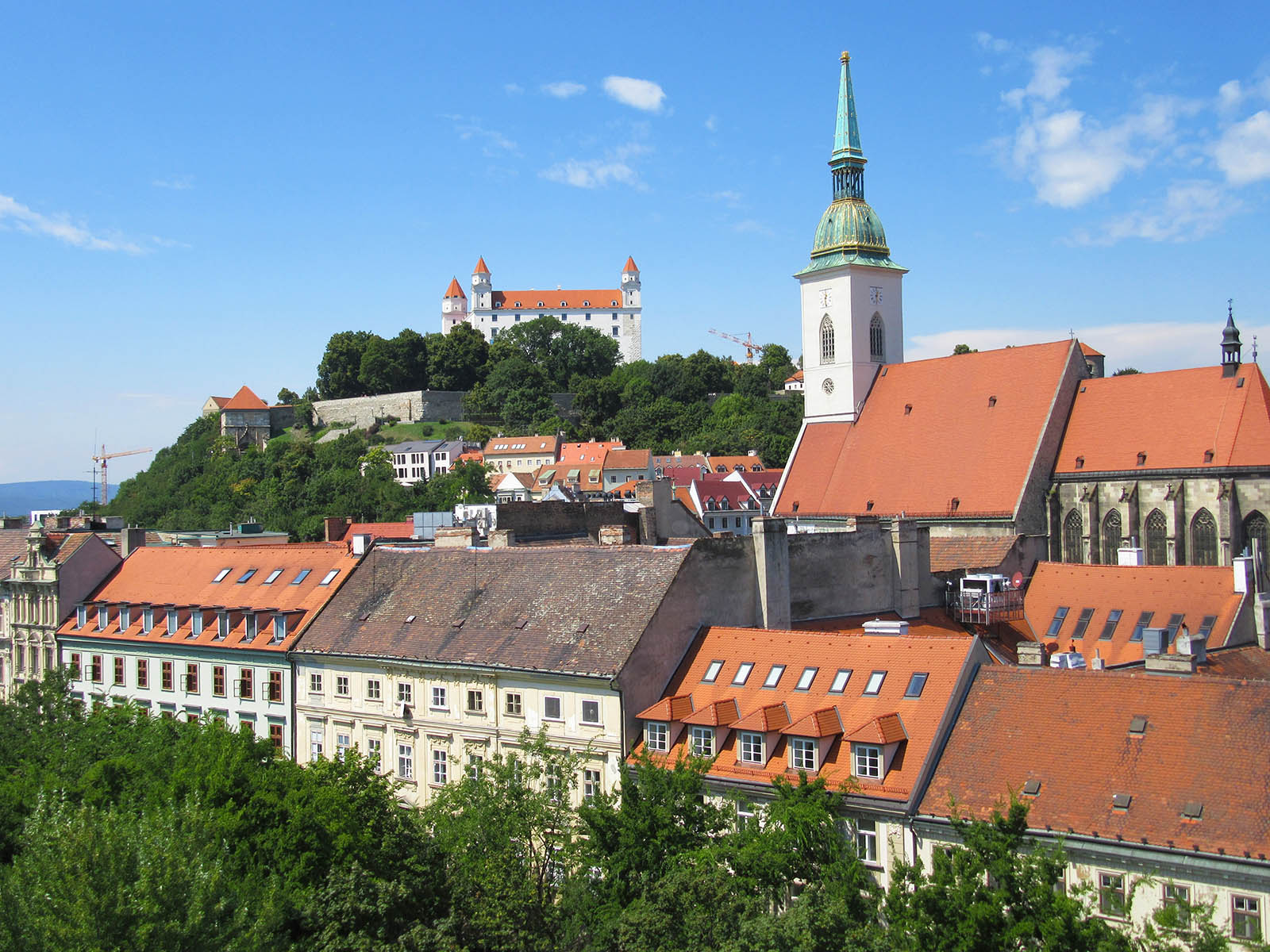 Because of its location and size, the Bratislava castle dominates the cityscape with its presence like a ghostly specter in every photo. On clear days you will be able to see Austria and Hungary in the distance from various viewpoints. The castle houses both a fantastic museum and also a public event venue. It famously hosted the Bush-Putin summit in 2005 and the signing of the country’s constitution in 1992. The castle has been used throughout its history as the seat of government for Slovakia.

The aristocratic Palffy family was responsible for renovations which made the castle look like an inverted table with its of four peaked corner towers. In 1811 a fire in what was then a barracks left the castle an abandoned skeleton, and restoration was to start only in the 1950s. In 1968, the government decided to restore the castle to its full glory as we all see it today. 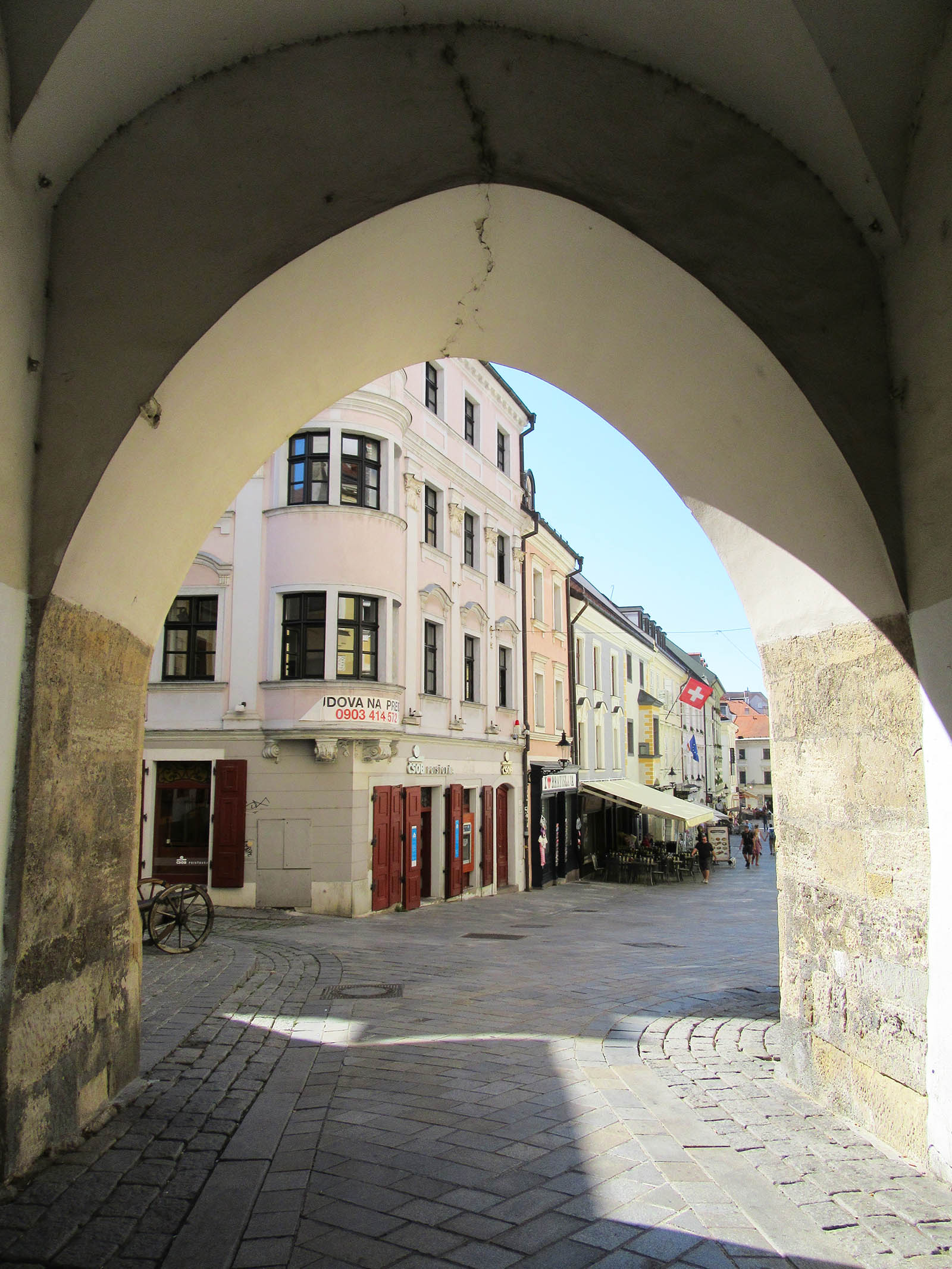 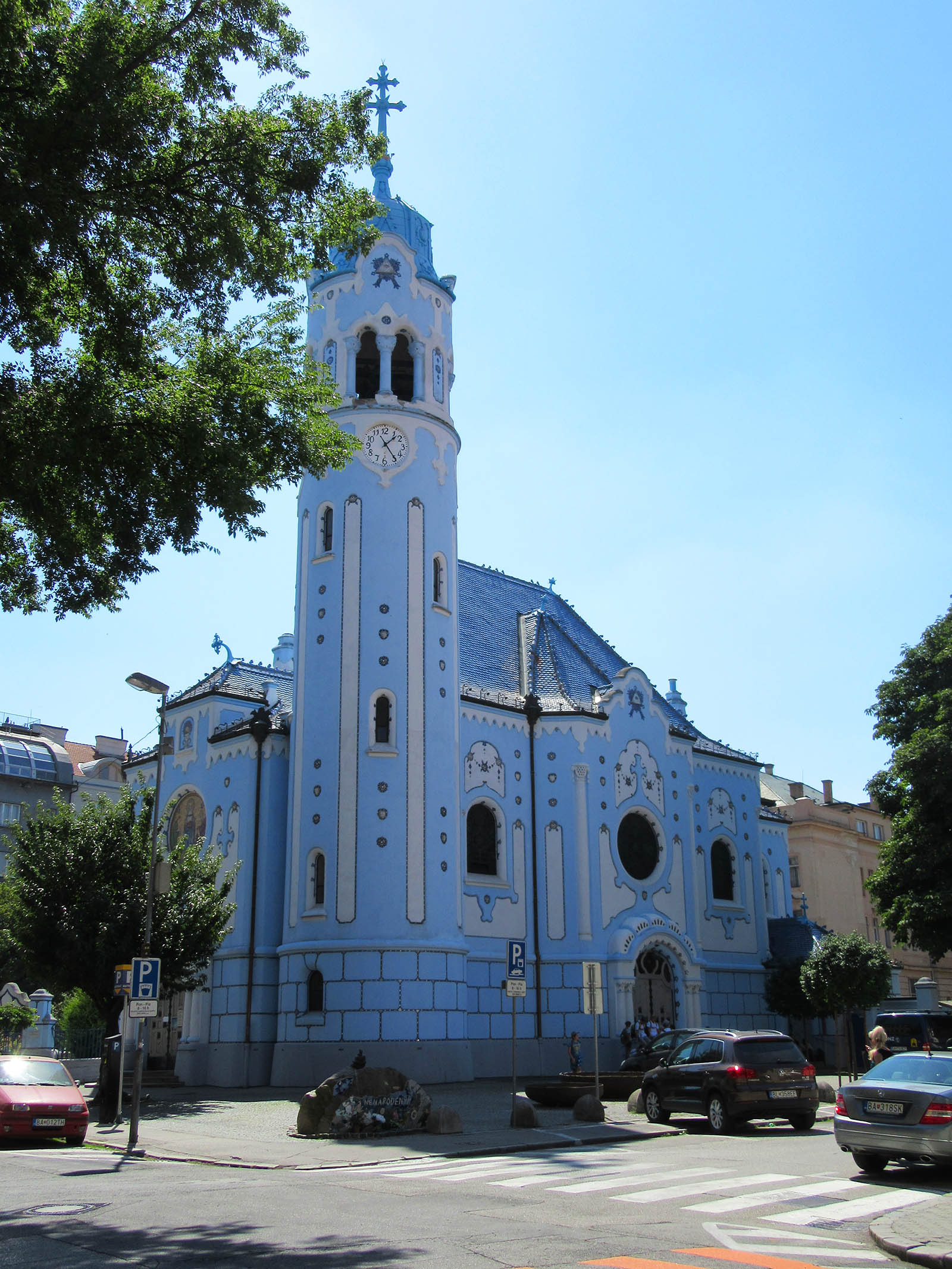 Hidden away from the main crowds, it is one of those stunning European buildings that are plucked straight out of a fairytale. What is special about this church is how different it is from any building in Bratislava – there is no other structure like it in the entire capital. With its blue façade, the church of St. Elizabeth is impossible to miss when you approach it, as those blue hues will immediately catch your eye. Often referred to as “The Blue Church” due to every aspect -its façade, mosaics, and roof – painted in a soft shade of blue.

Built at the beginning of the 20th century, this church has become a very popular place both for weddings and baptisms. The Blue Church is located on Bezručova street, only a 10–15-minute walk from the old town. 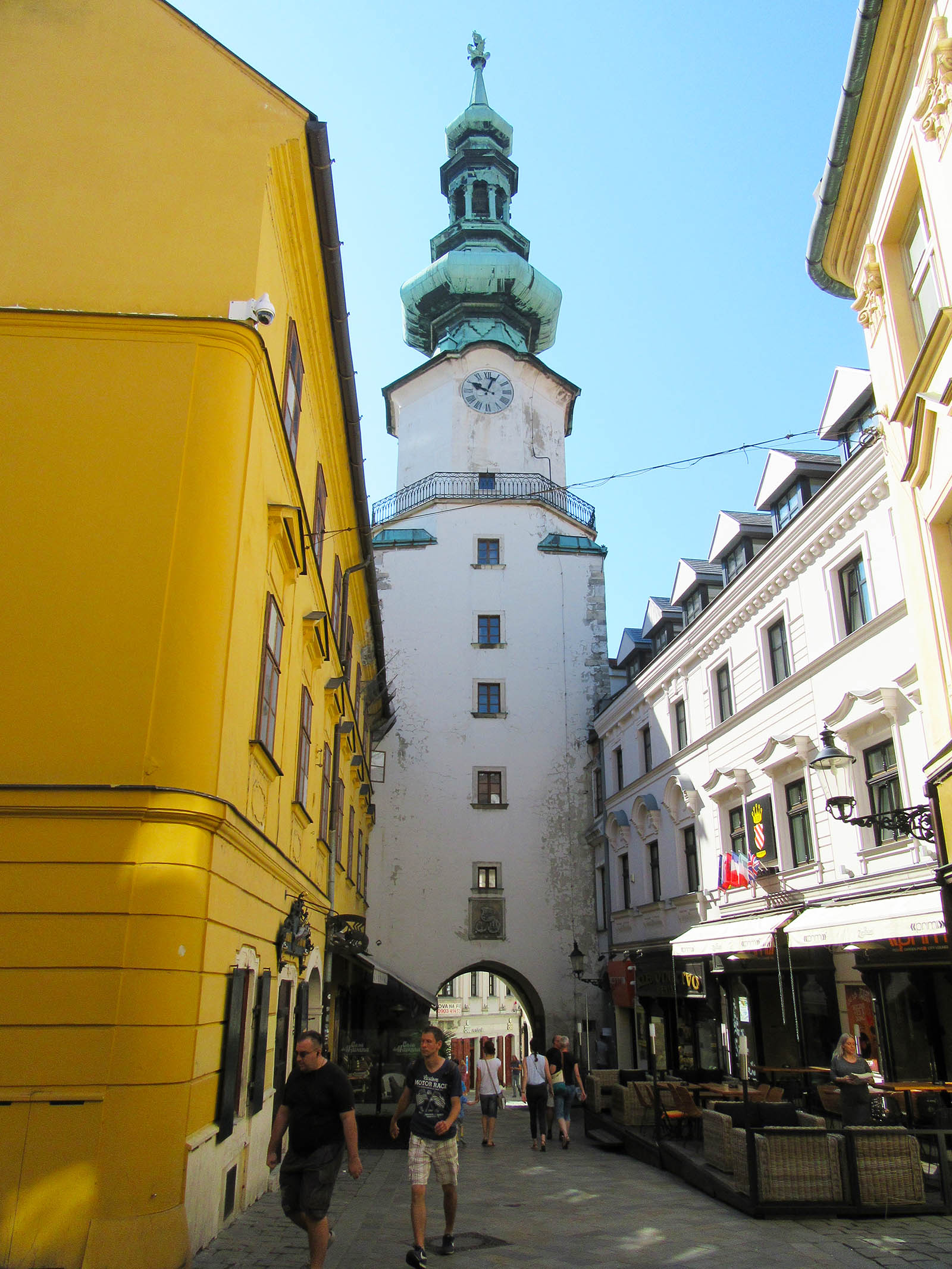 Michael’s gate is the last preserved gate of the city’s fortification dating back to the 14th century which served as an entry into the city. The upper terrace of its 51-metre-high tower offers magnificent views of the old town and its winding streets with the ever-present Bratislava Castle leaving its mark on the cityscape. This is one shot you cannot leave without, so have your camera ready.

There is a statue on top of the gate featuring Michael slaying a dragon which symbolically keeps guard over the tower and city. The tower also houses the Museum of Arms, and beneath the gate there is a pretty cool “zero kilometer” metal map showing the distances from Bratislava to other cities.

Tip: On the right side next to St Michael’s gate, look for house number 15, With a width of only 1.3 meters, it is believed to be the narrowest house in Bratislava and also possibly in Europe. 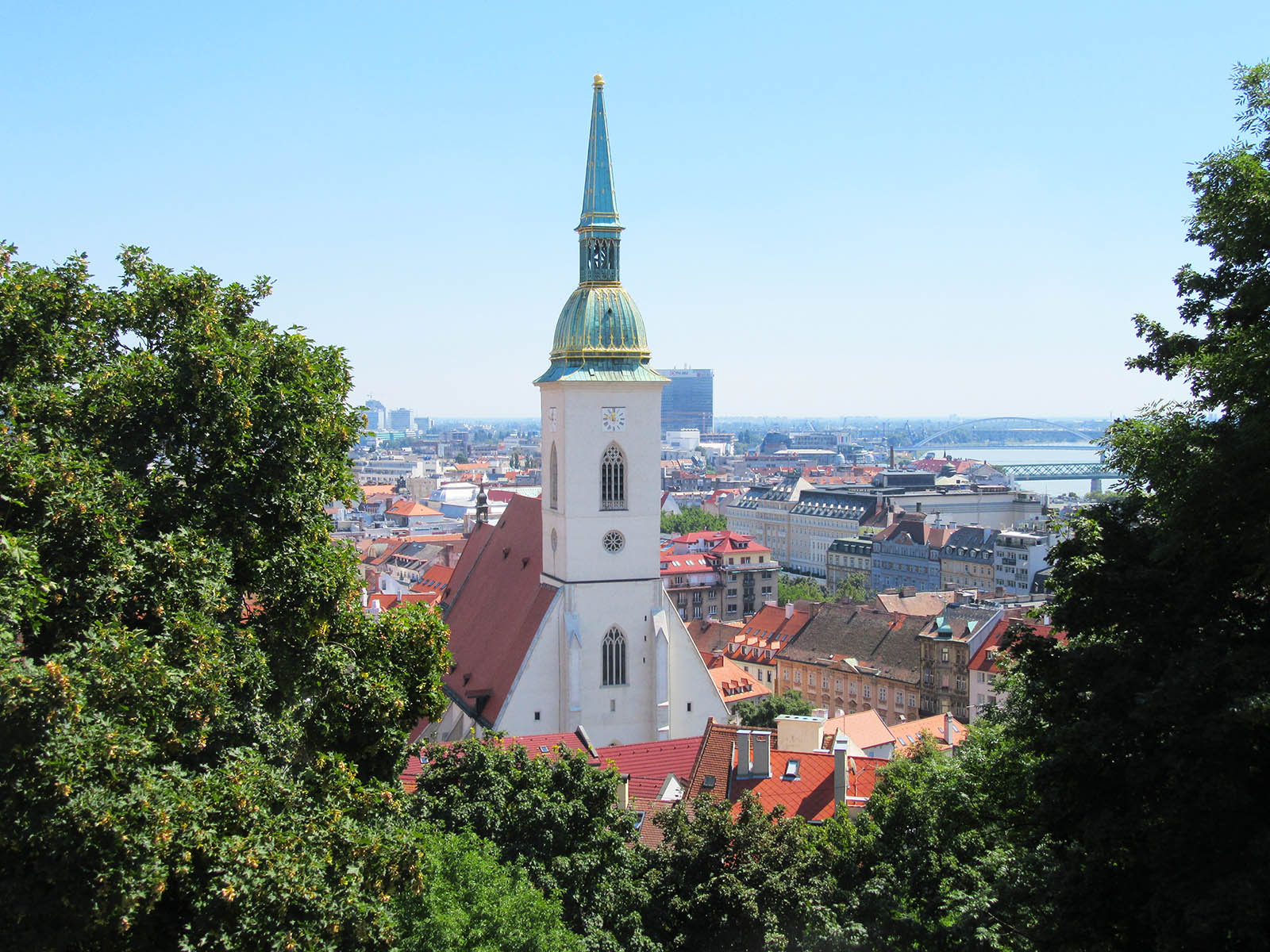 St. Martin’s cathedral is considered the most sacred and significant Gothic building in all of Slovakia. Built between the 13th and 14th centuries, it shares a dominating presence with the castle over the old town of Bratislava. The cathedral houses a Hungarian crown dating from the 19th century along with Baroque and Gothic artworks, and several crypts and catacombs. It’s a quick visit but may get crowded. The entrance to the cathedral is free. 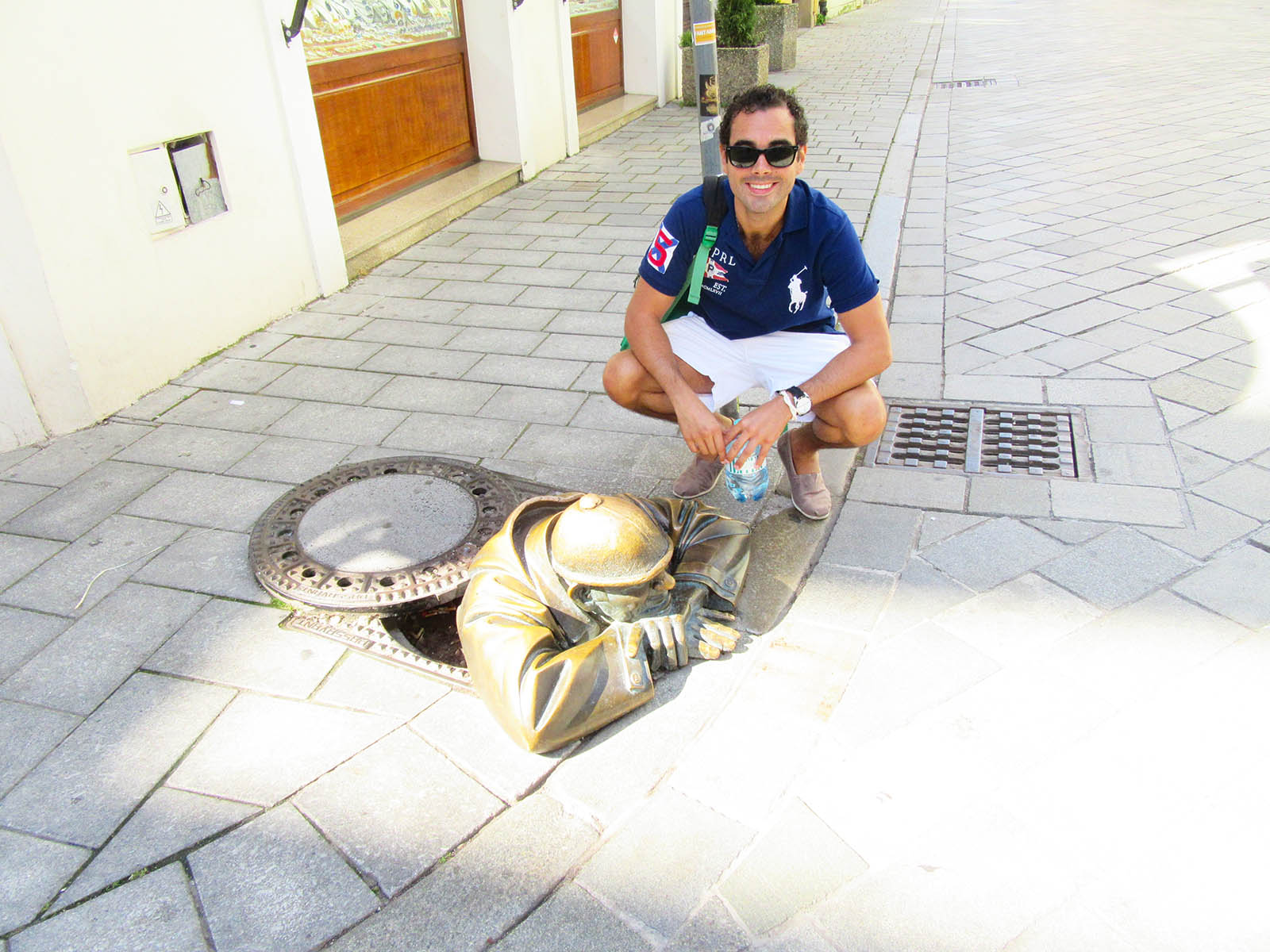 You can’t leave Bratislava without photographing the most famous statue in the city: the bronze figure of a man peeping out of a manhole. This funny old man greets visitors with a mischievous smirk as he eternally watches over his corner of the world. 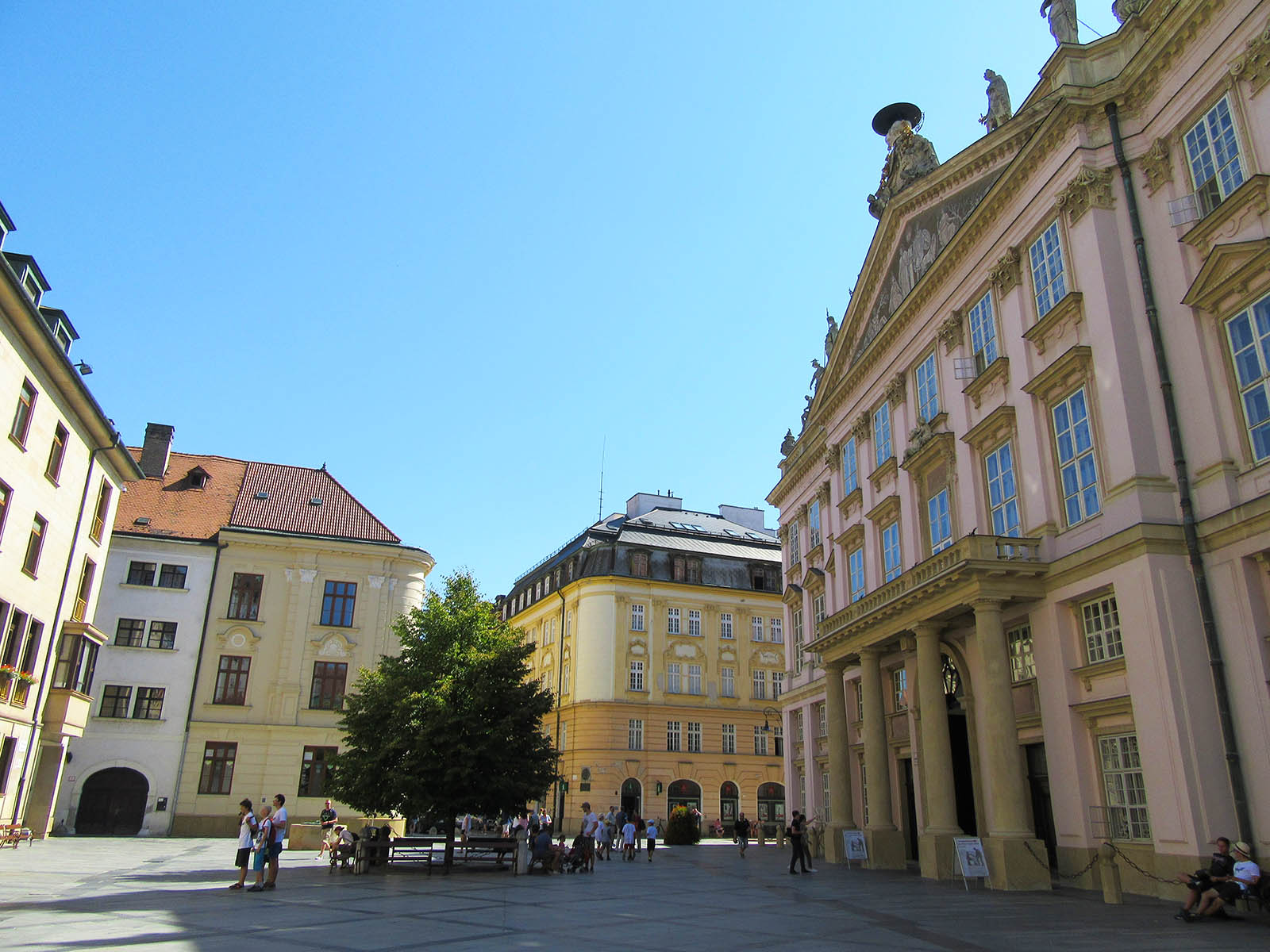 Located in the old town, the Primatial palace was built between 1778 and 1781 for Archbishop József Batthyány. Despite its beauty, the palace is famous for its Hall of Mirrors where in 1805 Napoleon signed the fourth Peace of Pressburg, ending the War of the Third Coalition. Today the palace functions as an administrative building hosting the city council and the offices of the mayor.

Here you can visit the famous Hall of Mirrors, as it has become a great location for various concerts, if you are staying the night in Bratislava, try to attend a show for an unforgettable experience. There are lots of different areas to visit in the palace – within the courtyard you will find St. George’s (the dragon slayer) Fountain. You can also admire a collection of 17th century gobelins made in an English Royal weaving factory, that were mysteriously hidden in the walls and found during a reconstruction in 1903.

Built between 1969 and 1972, the SNP Bridge is now an iconic structure in Bratislava and worth a visit. Straddling over the Danube to connect both sides of the city, this modern bridge can be a bit jarring when juxtaposed to the old city. However, at night it will light up, giving the entire city a stunning aura. There is a UFO-shaped restaurant on the top offering an observation platform where you can take an amazing picture of the city, castle and Danube. It’s the only entirely cable-supported bridge in Bratislava; it has no pillars in the riverbed like other bridges in the region.

Tip: Visit the restaurant in the late afternoon where you can combine great food with amazing sunsets.

7 facial skin care tips when you are on a plane