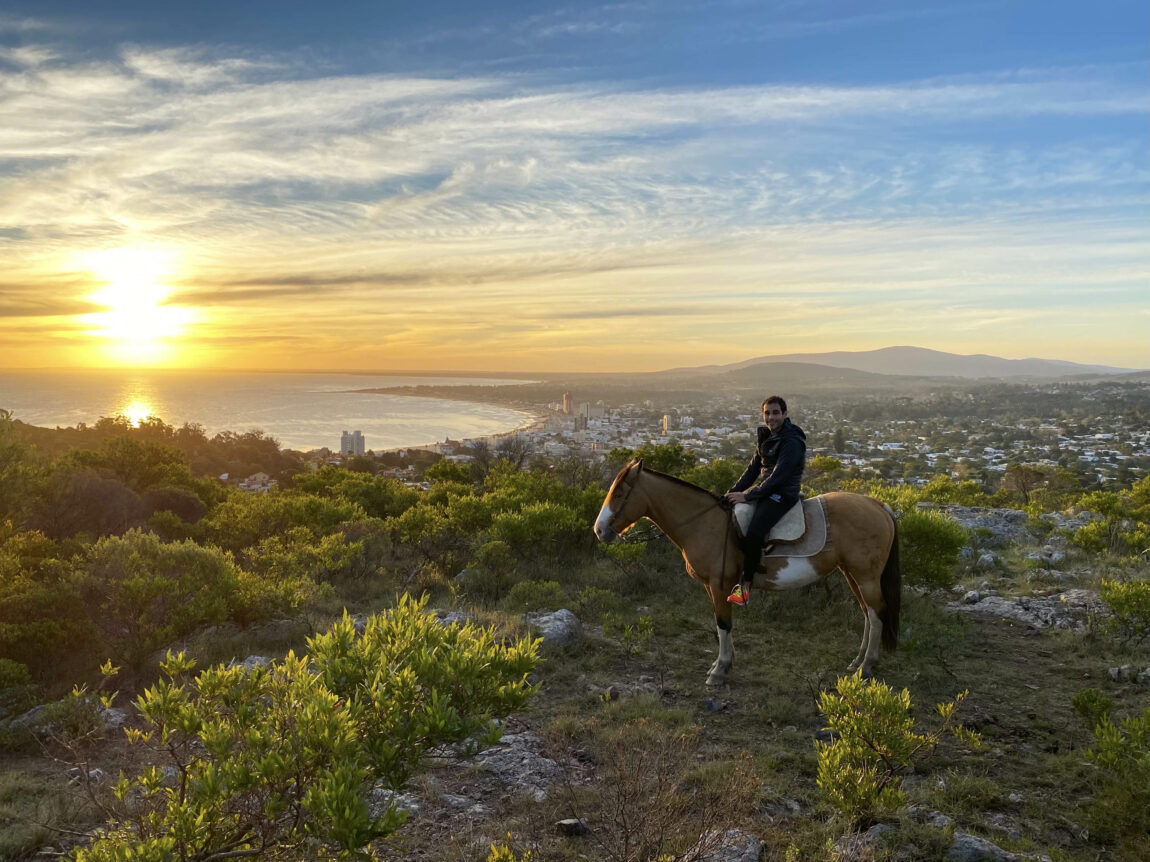 Practice horseback riding in Uruguay to take in the country’s gaucho culture.

The history of horses in Uruguay goes back as far as the first European settlers arrived on the grassy plains. Growing up in an Uruguayan household in the US, there have been some images burned into my mind – chic beaches, mate, asados, of course soccer, and the gaucho. The mythical gaucho has always held my attention, frankly in an enviable manner. Just like American boys wanted to be cowboys growing up, I quietly dreamed of being a gaucho – riding horses, looking bad ass in a beret, and enjoying an asado (Uruguayan BBQ) under the stars.

This was the epitome of cool, not the cosmopolitan city life or the rich playboys on the coast of Punta del Este. To me, the gaucho meant freedom; the freedom to drop modern life’s pressures to make a hard living by your own skill and wits. But who was I kidding? I was always soaking up the sun on the beach or chasing girls on the boardwalk, the easy life was too much fun.

I was always enthralled by the Uruguayan country life, especially since my maternal grandfather would tell me tales of his adventures growing up in between both worlds – while he lived in Montevideo, he spent an avid amount of time in the countryside. He met my grandmother in the country, where he would ride his horse to pick her up for a date. I would hear stories of his escapades as we would sit drinking mate in the mornings. On my father’s side, my grandfather’s family owned estancias throughout Uruguay – which were filled with real gauchos herding cows along grassy pastures. Not only is horse riding in my cultural heritage, but it has a strong presence in my literal blood and soul.

Whether you are on one of the famed estancias with the local gauchos, or have a love of Uruguayan country life and ride the low lying cerros – you must try your hand at horseback riding. 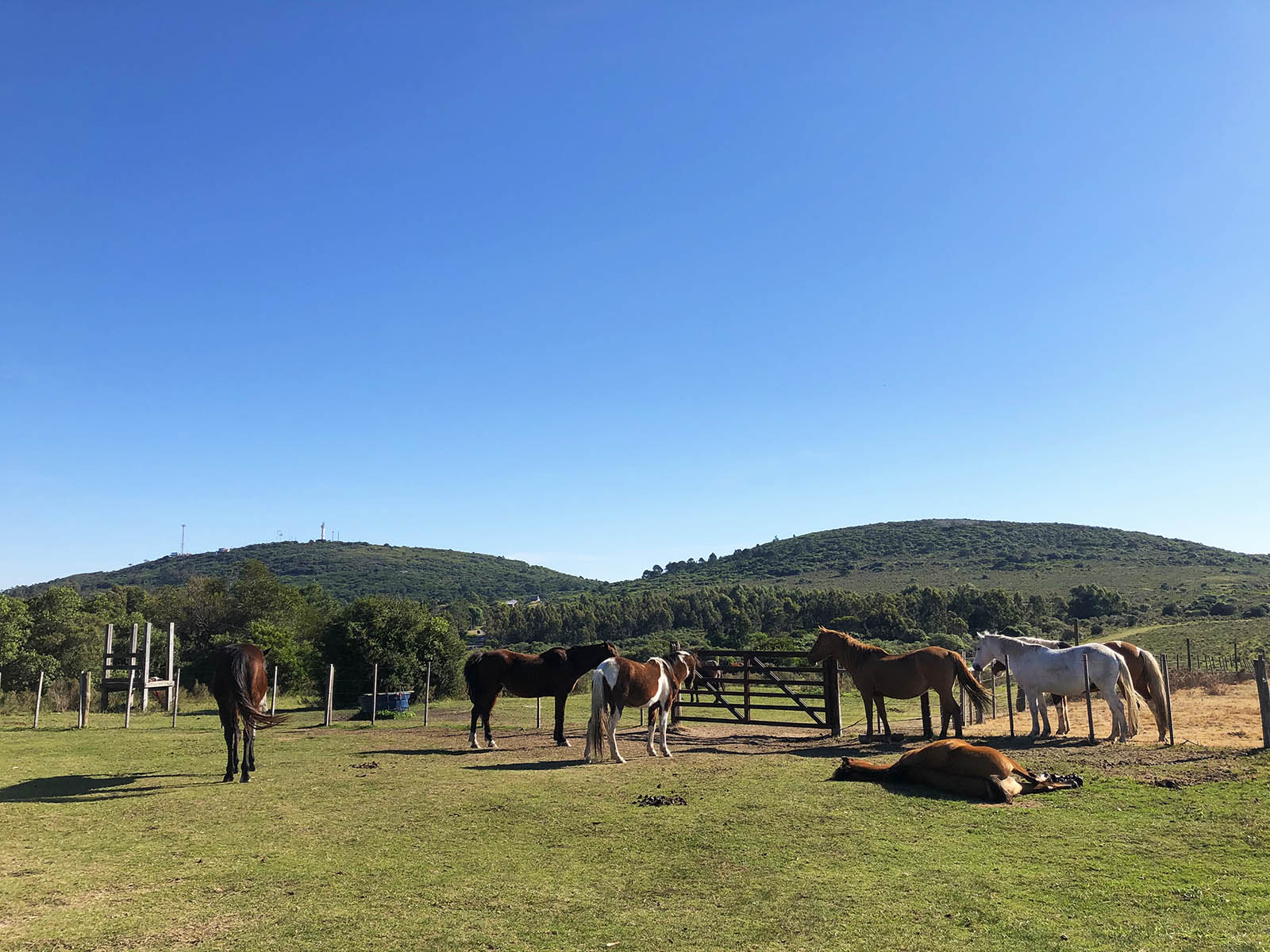 Horses and the surrounding hills of Piriapolis. Credit: Carolina Valenzuela

There are plenty of places where you can go horseback riding in Uruguay. Ranches, called Estancias, are the first place that comes to mind – especially when you picture your experience surrounded by gauchos – but many other schools are easily available. They can be as close as twenty minutes away from Montevideo, or right around the corner of a beach town.

Earlier this year, when I spent a couple of months in Punta Colorada, I had the opportunity to take horseback riding lessons in Juan Martín Luzardo’s school. This is a guy who literally grew up riding horses, as his first memory is being on a horse; Martín would fall asleep on horseback as a baby when his dad would take him riding. Martín is a true lover of horses who believes that everyone should experience being around this noble beast. He is super respectful towards the animals and only uses techniques which don’t harm or stress the horses in anyway; in fact, he goes out of the way to be kind and connect with all the horses in his care.

If it wasn’t clear how profound his love and admiration for the horse is, you’ll immediately pick up on it once you take your first lesson. He is a great instructor, who is extremely passionate and patient (especially with a dunce like me!) and was the perfect person to learn how to ride.

The school, located in a unique setting in Punta Colorada, is surrounded by low lying hills all around, giving you the opportunity to learn horseback riding surrounded by nature. You’ll see lots of other horses, as the school also boards local horses which gives the animals the chance to socialize. Martín will be the first to tell you horses are social animals and for a horse to be around others horses it is extremely beneficial for quality of life.

While horses may be stabled, Martín likes them to be in their natural setting as much as possible; horses are normally found across the vast fenced terrain so they can remain together. Martín does have a stable with food and water for the horses, but they avoid it to rather spend time with one another – Some even have specific friends who always greet each other upon returning home. 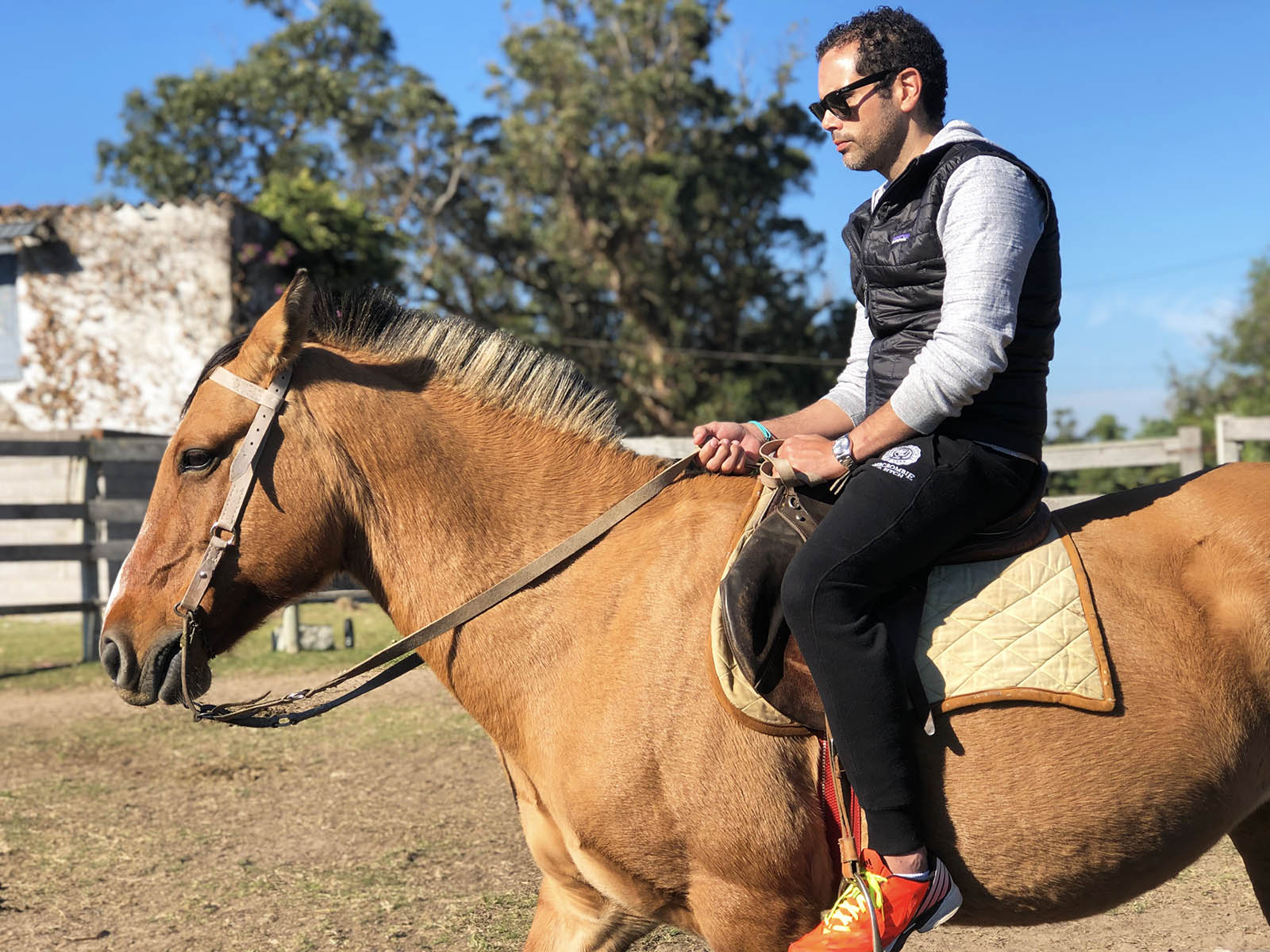 Normally, I tend to jump into a situation and then think afterwards of the consequences…a strategy that’s worked so far for me in life. However, the first classes I took, I have to admit, I was kind of scared… but Juan Martín was with me the entire way making sure the horse and I were both comfortable. He immediately had me stand in front of the horse and gently pet it while I would talk; this would also make the horse feel comfortable around me. In the first couple of classes, you’ll learn the basics – how to mount, how to hold the reigns, how to prompt the horse to either start or turn, and of course how to “brake”.

After a couple of classes, Martín wanted me to start riding through the hills and he took me one late afternoon to one of his favorite spots in Punta Colorada. This hill sits hidden behind the Cerro San Antonio giving you a breathtaking view of Piriápolis from above and with the sunset streaking the sky, it was undeniably beautiful. It’s one of those moments when watching the sunset from your native patch of earth that you realize how the stresses of modernity simply don’t matter. And then my favorite part: we took the horses to the beach. Here, along the water’s sandy shores we had the horses galloped the length of the beach.

There is an intense freedom to riding a horse, something that feels natural. In today’s world, where we are constantly preoccupied to unnatural devices, it is important to reconnect with activities humans have done for thousands of years. Horseback riding, with the bond you make with the animal or the connection with the land, is the perfect opportunity to get back to our human roots.

Personally, I cannot recommend a better teacher. Even if you are experienced, Martín accepts everyone and will curate your time to fit your level. If you want to contact Juan Martín, visit his Instagram page.

What you need to bring

While you may want to just show up in jeans and a tee-shirt, truth to be told there are some items you need to bring which you may not have considered:

Comfortable shoes – While you should preferably have a good pair of riding boots, which are easy to clean and provide the perfect grip on the stirrup, you should at least have some comfortable shoes. Whether they are a pair of sneakers or hiking boots, make sure you can be in them for an extended period and can clean them easily. If you want to buy riding boots, you can do so locally at one of the traditional clothing shops in Uruguay, just make sure you don’t get one of the high end boots for your first time out.

Light jacket – It’s always good to have a light jacket with you when traveling and horseback riding is no exception – especially in shoulder seasons. I normally go in the afternoons to catch the sunset over the hills, and in Uruguay once the sun goes down it can get chilly fast. Once you get more experienced, you’ll feel more exertion and start to sweat; a light jacket can help keep you warm when you cool down. On cooler days it’s best to bring a sweater along to keep you warm. I prefer to use The North Face Thermoball vest, as it’ll keep you warm enough during a ride.

Hat – The sun is strong in Uruguay, even in the winter. But let’s be honest every rider in history has had a cool hat or two on while on horseback. While you can wear a regular dad hat or baseball hat, or even a trucker hat, why not go local? Go ahead and buy a beret (like me) or stop by one of the local shops, like Arte y Tradición, which specialize in traditional clothing, to get a gaucho hat for your ride.

Sturdy pants – This may seem odd, but make sure you wear jeans or sturdy riding pants (or work pants like Dickies). While on horseback you’ll be surprised how often you can brush up against branches and other objects that will tear clothing. Another option is to get a traditional “bombacha”, or riding pants used by gauchos – not those silly things worn in the late 2000’s. These are well worth the purchase as they are sturdy and easily fit into your boots. You can also wear them without boots as they are quite comfortable; think of them like thicker khakis or slacks.

Sunscreen – A must when you are outside. Like I said earlier the sun is very strong in Uruguay and you’ll burn easily (even if you normally don’t). Bring along Coppertone sunscreen to be sure you have good protection.

Torres del Paine National Park full day tour: Is it worth it?

The gems in Piriapolis, Uruguay, that will make your visit