The Imperial Palace Tokyo, Japan, a walk through history

Shoguns, Samurai, God-Emperors, the quest for perfections. All of this, which is uniquely Japanese, can be tied to one place in a true megalopolis that juxtaposes two worlds – the Imperial Palace in Tokyo.

Tokyo on one hand can be a hyper modern city right out of Blade Runner, while at the other it is proudly and deeply entrenched in it’s past. It’s no coincidence the Imperial Palace sits in a literal oasis of history surrounded by skyscrapers and neon.

About the Tokyo Imperial Palace

Just ten minutes from Tokyo Station lies the Imperial Palace; as soon as you ascend from the metro steps, you’ll immediately see Japanese’s palatial grandeur at its finest – a myriad of gardens, cherry blossom viewing points, art galleries, and even historical ruins – all to be an earthly paradise for the Imperial Family.

Located on the former site of Edo Castle, you’ll find a massive park surrounded by a moat and giant stone walls. This castle, literally right in the center of Tokyo, serves as the residence of Japan’s Imperial Family since 1869. Since this serves as the family’s official residence, entrance into the palace is off limits. Only two days a year, January 2 (New Year’s Greeting) and February 23, (Emperor’s Birthday), visitors get to enter the private grounds to see the Imperial Family, who make several public appearances from a balcony. However, when you enter the main palace grounds you won’t be disappointed in the least – royalty sure does have its perks.

Edo Castle has a long and tumultuous history. Originally built in 1457, it was the residence of a famous warrior, Edo Shigetsugu, surviving multiple sieges until abandoned in 1590. When Tokugawa Ieyasu gained power and eventually became Shogun, it served as the seat of power of the Tokugawa Shogunate who ruled Japan from 1603 until 1867. In 1868, the shogunate was overthrown during the Meiji Restoration, leading to the Japan’s capital and Imperial Residence moving from Kyoto to Tokyo. 1888 saw the completion of the Imperial Palace until it was destroyed during World War II. Thankfully the palace was rebuilt in the same style, preserving it for future generations.

As I mentioned, the Imperial Palace is easy to get to – just take the metro to Tokyo Station and take a very short walk of about 10 minutes. You cannot miss it as it’s a massive castle in the middle of a city, surrounded by a mote and a couple gates of entry. No matter which gate you enter, you’ll enter the public area; don’t worry about going into the private grounds as guards will let you know and point you in the right direction.

Starting in Kokyo Gaien, the large plaza in front of the Imperial Palace, you’ll easily be able to view the Nijubashi, two bridges that form an entrance to the inner palace grounds (where the Imperial Family resides). The stone bridge in front is called Meganebashi (Eyeglass Bridge), while the bridge in the back is called Nijubashi (Double Bridge) as it was formerly a wooden bridge with two levels.

Tip: This is one of the iconic images of the Imperial palace, and it gets packed. Be patient as you cannot leave Tokyo without this photo.

The east gardens, open daily except Mondays, Fridays and some holidays, are the quintessential Japanese garden. No matter when you go, these gardens are stunning, however during the cherry blossom season in spring or when the foliage changes in autumn, you’ll have your breath taken away.

As you stroll around you will notice there are plenty of flowers blooming, make sure to check out the palace’s flower guide if you love flowers. These gardens are free to the public but time your visit right as this is a major attraction in Tokyo. During your walk through the grounds, you’ll catch glimpses of the area’s history as you’ll find the ruins of Edo Castle, where you can even climb the castle tower foundation that burned down over 350 years ago. Make sure to stop by the Museum of the Imperial Collections located nearby. 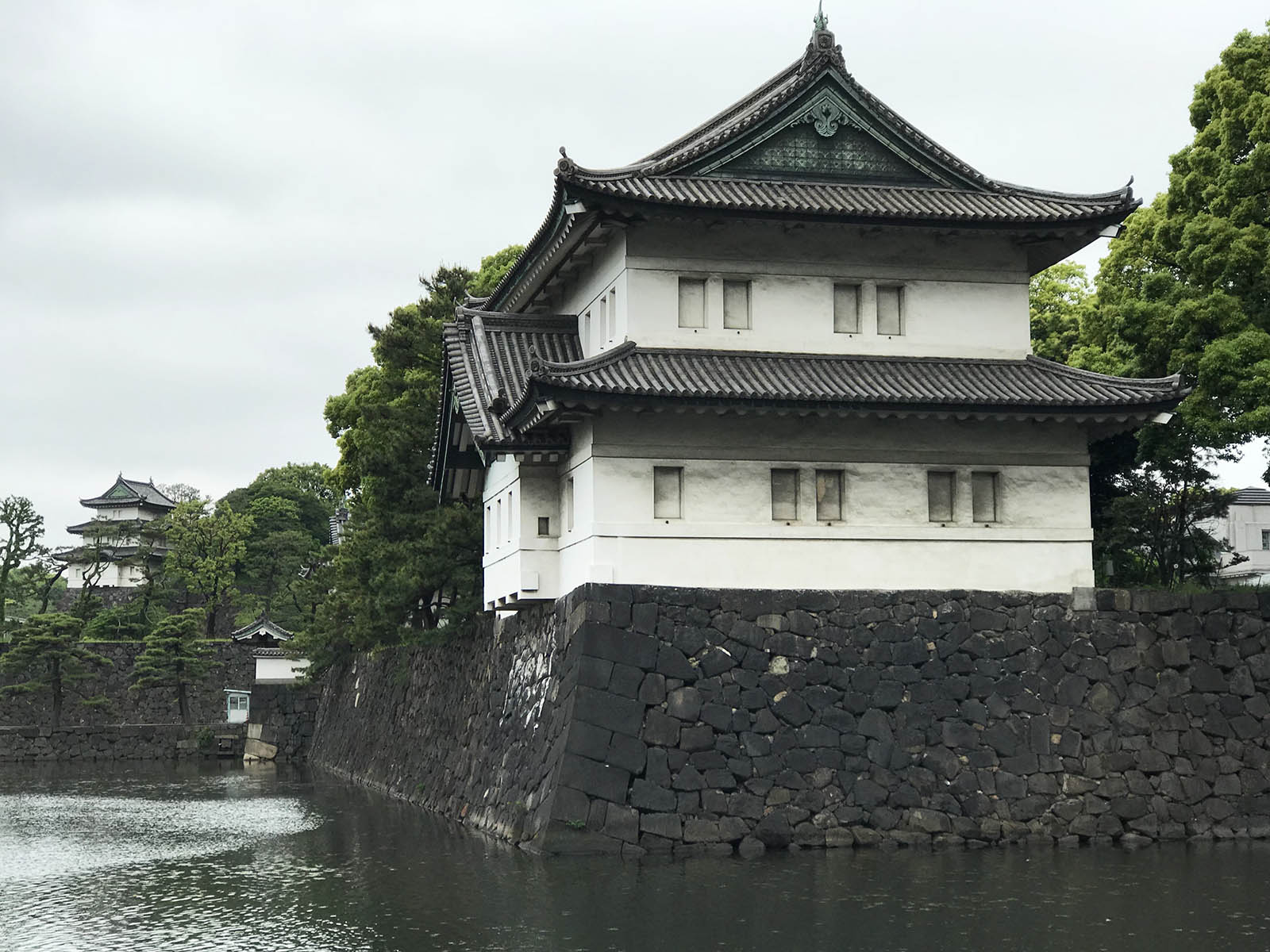 The Imperial Palace Walking Tour is the most popular tour offered on the grounds. It’s important to note some part of the private grounds can only be viewed via the tour, done in both English and Japanese twice a day, and available from Tuesday to Saturday. Same-day tickets are available, but you will most likely have to wait in a very long line of tourists – skip the line and make advance reservations for a ticket by contacting the Imperial Household Agency.

Tip: If you want to get some exercise, many Tokyoites use the path around the palace permitter as a jogging route. You can also get some good pictures of the juxtaposition of modern Tokyo with the historical Imperial Palace.

Although it won’t take you inside the palace, again it is a private residence, you’ll see historical some great sites such as the Mt. Fuji-view (where you can see the mountain on a clear day) the Lotus Moat, and also give the chance to cross Nijyu Bridge, considered the symbol of the palace and to some extent the city of Tokyo itself.

We are part of several affiliate programs including Viator which means that we will earn a small commission at no extra cost to you if you make a purchase through the links included in this post.

Meiji Shinto Shrine: A peaceful oasis in the middle of bustling Tokyo