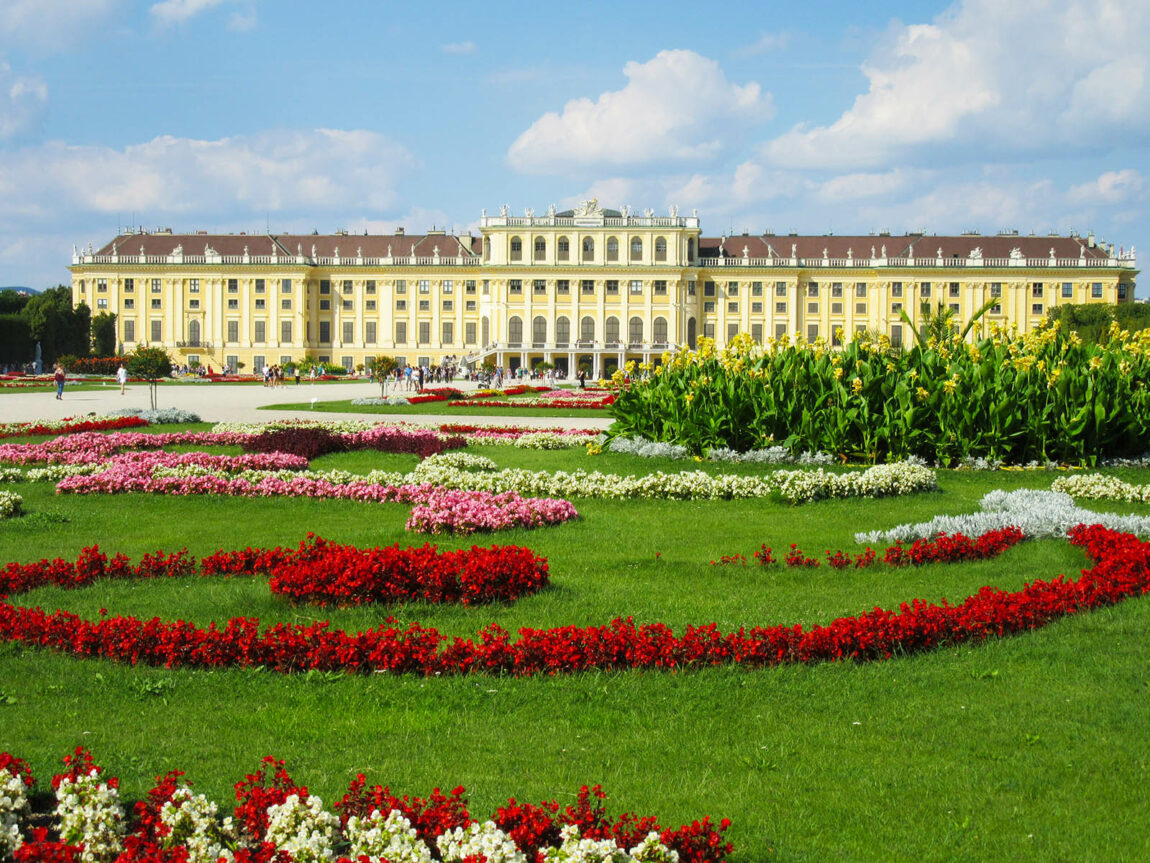 Check out a list of top 10 things to do in Vienna, Austria.

If I had to choose one word to describe Vienna it would be elegance. This former imperial capital, with palatial grandeur strewn throughout the city and the echoes of the classical masters dancing through the air, captures the imagination with every step. Vienna welcomes you with an elegance almost forgotten in time.

We spent three days in this city, which gave us a good amount of time to explore its major sights. Vienna is not only famous for its music and splendor, but it is renowned for the café culture which inspired artists, philosophers and politicians alike for centuries. The coffee drinking culture, along with some of the most historic coffee houses, can be found all around Vienna drawing locals and tourists alike to enjoy hours of inspiration.

Below is a list of the top 10 attractions we recommend visiting when in Vienna. 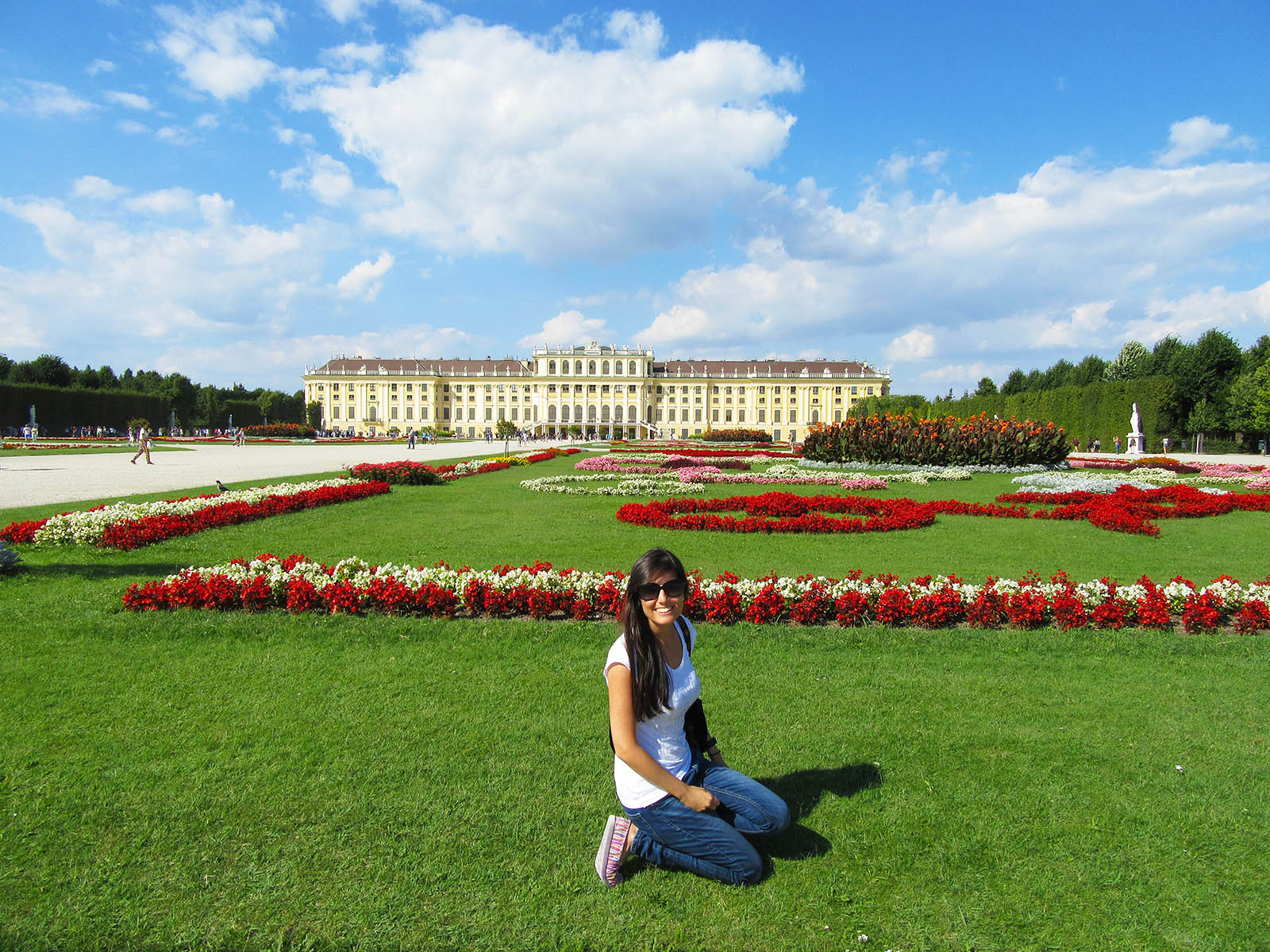 Schönbrunn Palace is among Europe’s most magnificent imperial estates and has been owned by the famous Habsburgs since 1569. The palace has been used by the imperial family from a “humble” hunting lodge to the summer residences of the empress. Originally dating back to the 14th century, the palace has grown throughout the years to its current elegance and is a history lover’s dream. However, its most stunning feature can be found in the gardens.

Among the splendor of the palace, the gardens were designed to organically intertwine with the buildings. This is a great example of the concept of Gesamtkunstwerk, where many forms of art fuse to create a “complete work”; the concept can be seen throughout Vienna and especially at Schönbrunn. 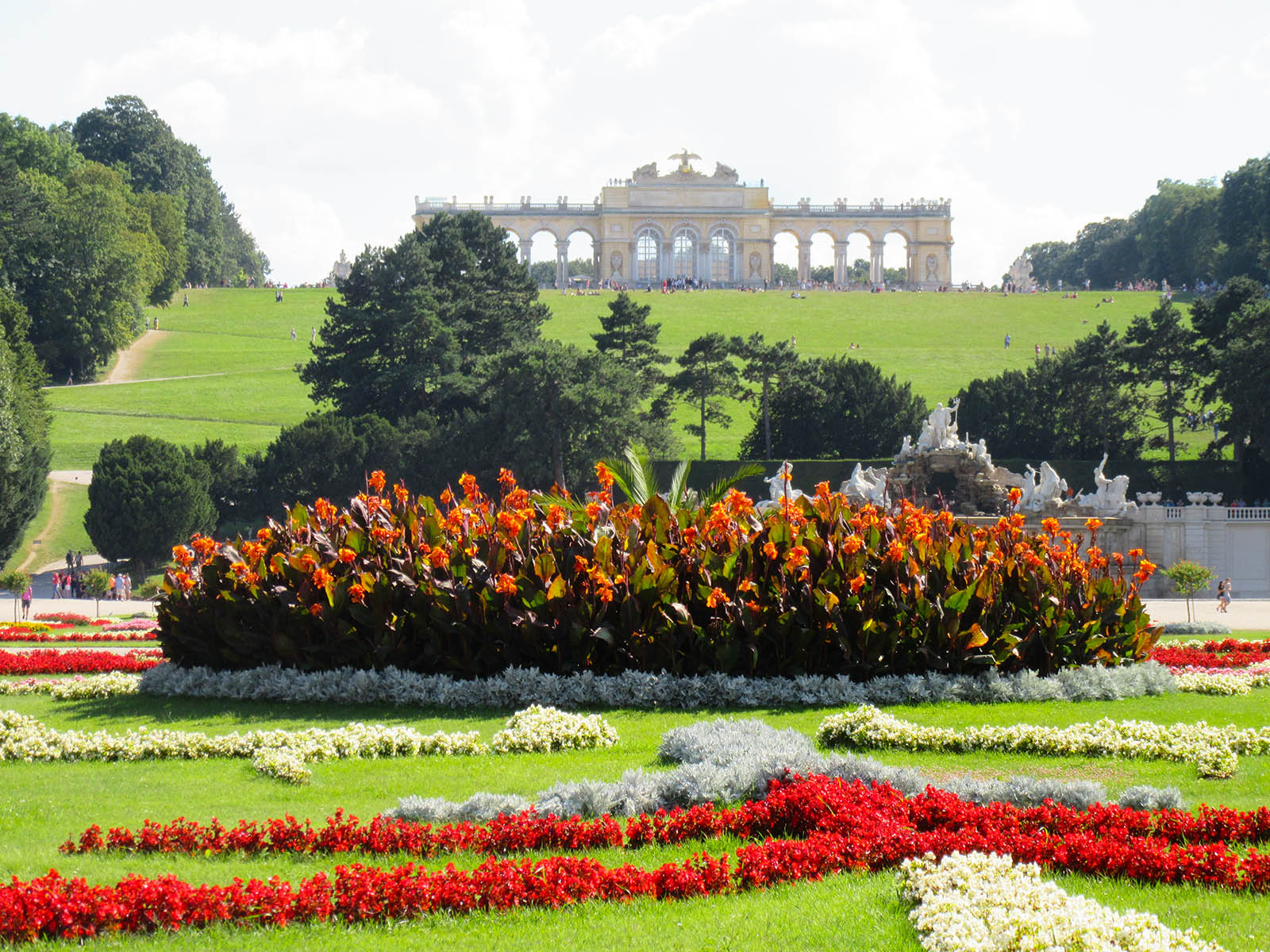 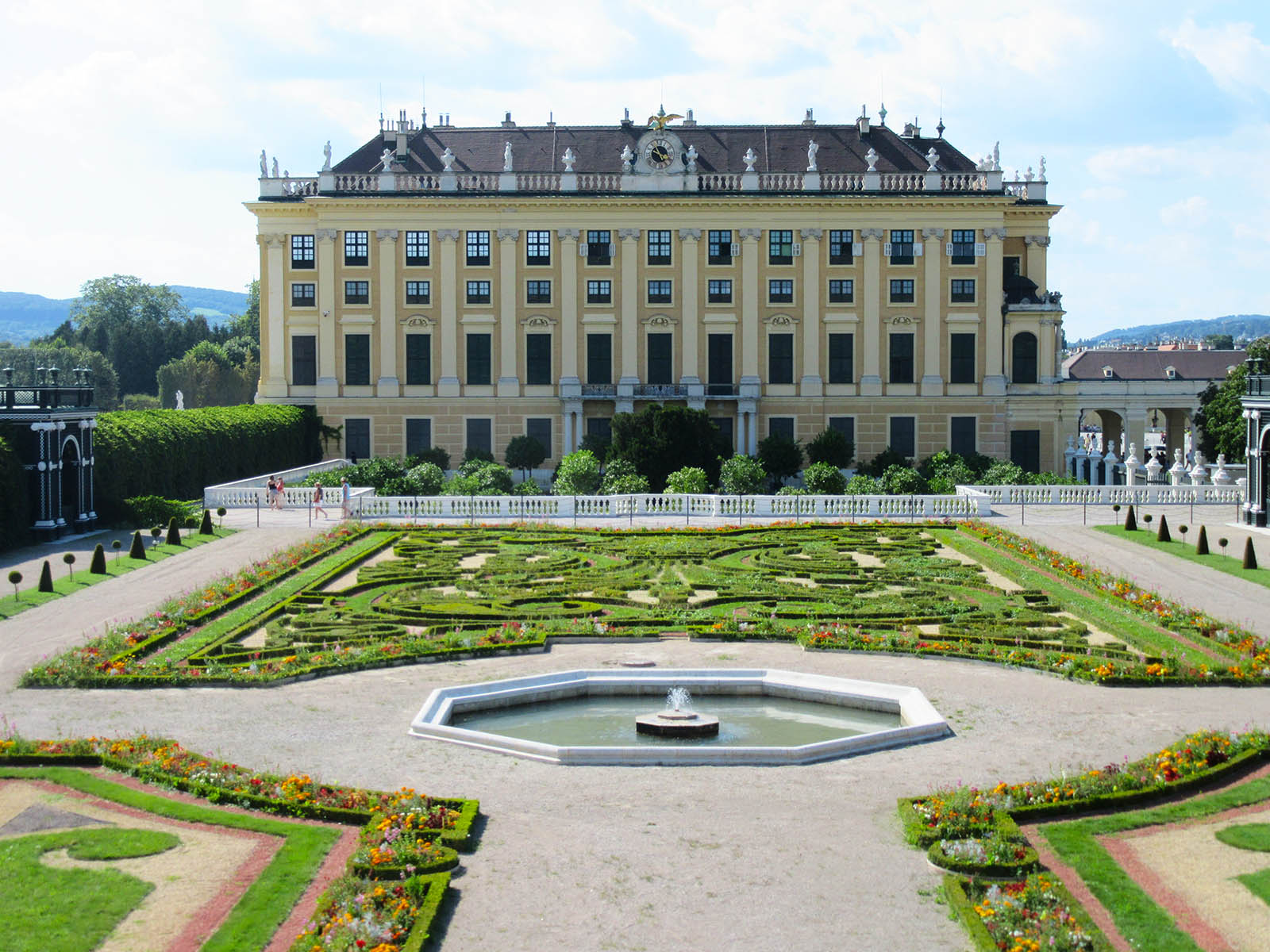 Tip: Since this is such a popular attraction, get there early or even better, buy your tickets in advance so you don’t waste time being in line.

The Schönbrunn gardens are extremely well-preserved so spend some time strolling and soaking in the immaculate grounds. Whatever time you spend here is worth ever second – you will be captivated not only by the splendor of the gardens, but the tranquility and harmony that meander throughout. The gardens were first opened to the public back in 1779 and since then they have been a major recreational facility both for Viennese and tourists alike. The gates open at 6:30 am and entrance is free of charge. However, if you wish to visit the Maze, Zoo, Orangery Gardens, among other attractions you will need to purchase separate tickets.

Tip: There’s a wonderful view of the city from the Gloriette. Do not forget to take a picture from this spot.

For opening times and to purchase tickets visit the official website.

Pay a visit to the only apartment which was inhabited by Mozart that still exists today. Mozart lived in this apartment from 1784 to 1787 and it’s where he composed the world-famous opera “Le Nozze di Figaro” along with three of the six Haydn Quartets. Talk about inspired living!

The apartment is now a museum, which displays several pictures and key documents that allow visitors to follow the footsteps of Mozart’s life during his stay. Among the unique items in the apartment is a musical clock dating from 1790, which plays a variation of the “Andante for a cylinder in a small organ”, Mozart is thought to have composed this pieces specifically for this very clock.

Before you leave, visit the gift shop where you can purchase souvenirs as well as an exclusive selection of CDs and DVDs.

Tip: Throughout Austria you’ll find Mozart chocolates (Mozartkugel being my favorite variety), make sure you don’t leave with out trying these addictive bonbons. 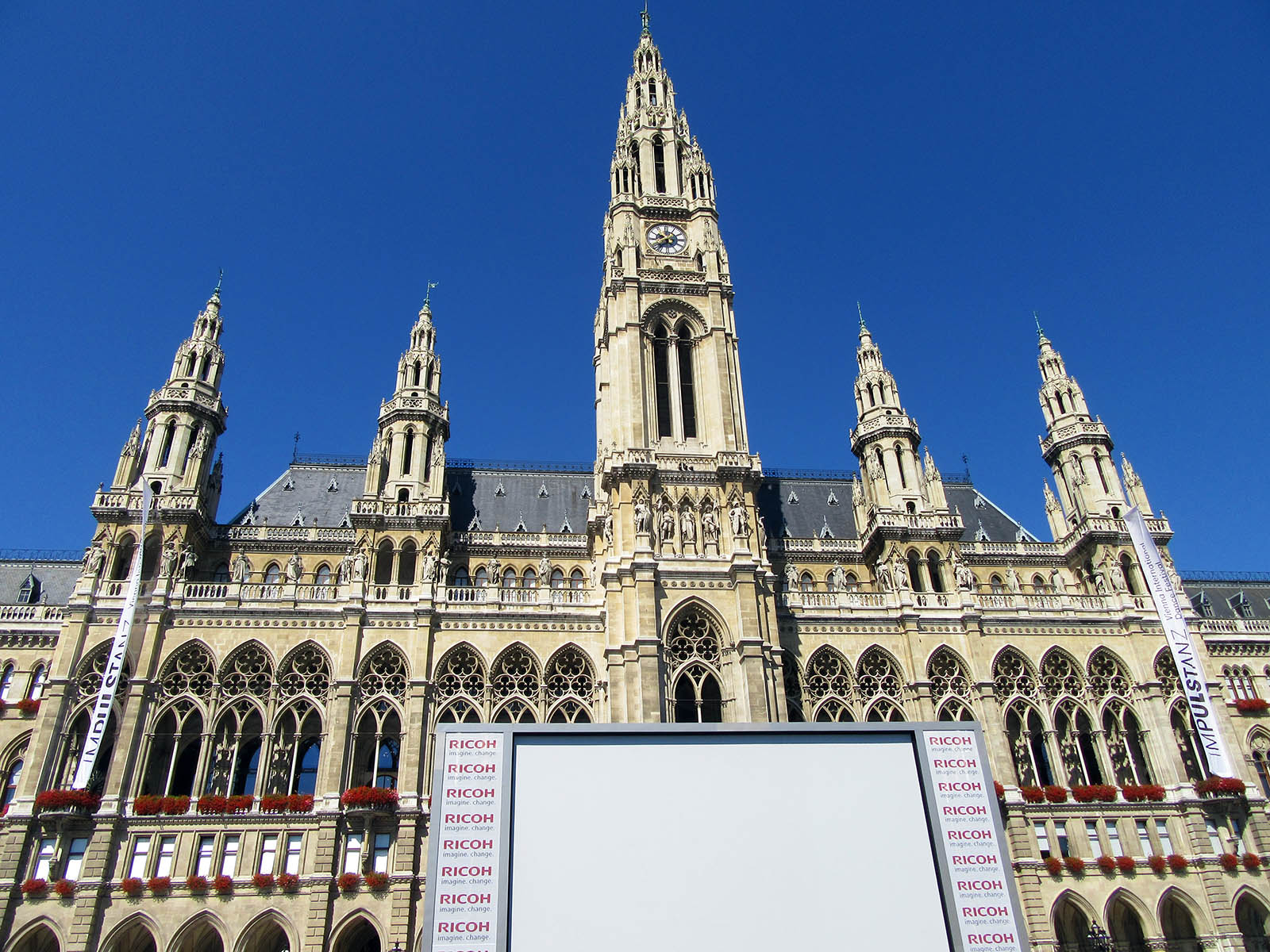 Vienna’s City Hall is among the city’s most beautiful buildings. It was designed by Friedrich Schmidt and erected between 1872 and 1883. The City Hall is the head office of Vienna’s municipal administration.

Guided tours to visit this building are available so visitors can get a close-up look at the Council Chamber, the two stunning Coat of Arms Halls, the Stone Halls, Festival Hall, Senate Chamber, Grand Staircases and the Arcade Courtyard with a good view of the Rathausmann statue on top of the main spire. Tours take place on Mondays, Wednesdays and Fridays at 1pm, with a few exceptions. Visit this website for more information on guided tours.

We visited Vienna in August, which was a perfect time for outdoor festivals. Here in City Hall you will find one of the liveliest festivals in Vienna. You will be treated to classical movies projected on a giant screen, lots of musician playing the greatest hits of the masters, spontaneous dancing and most importantly a bevy of food/beer stalls offering everything from local favorites, like sausages, to international cuisine. 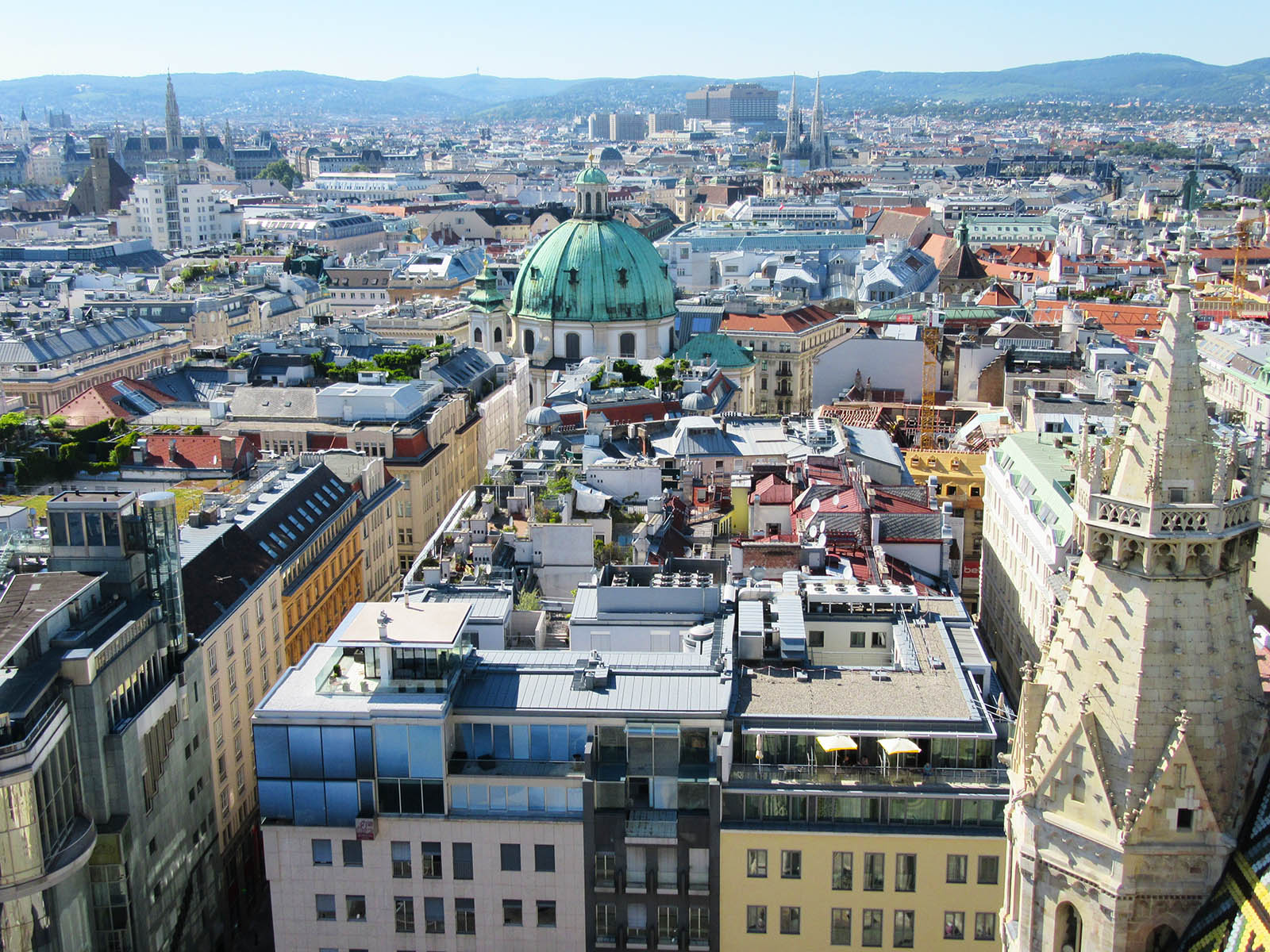 Vienna from above. Credit: Carolina Valenzuela

To see Vienna from above, head to St. Stephen’s Cathedral which is considered one of the most popular viewing points in the city. The gothic cathedral, which also incorporates baroque elements, was constructed in the 12th century.

The cathedral offers two different viewing points. Visitors can either take the elevator to the north platform – where the large cathedral bell is located or alternatively climb 343 steps to the South tower. Mind you, these steps are not the normal affair – you will need to squeeze through winding staircases where at times will only allow for one person to go up or descend at a time. Say no to the extra schnitzel until after you descend back to the plaza.

Guided tours of the cathedral and the tombs of bishops and Viennese royals are offered on a regular basis. Visit the cathedral’s official website to check the entrance fees.

Tip: Stephansplatz is surrounded by tons of restaurants and cafes. While the food may be good, the prices are typical of a tourist trap. It’s better to go to one of the classic cafés the city has to offer for a better meal and price.

Stop by Vienna’s most beautiful coffee house and enjoy a wide selection of coffee and sweet treats baked at the in-house patisserie. While you enjoy the tasty treats, and admire the beautiful design all around you, remember that this coffee house was once frequented by some of history’s most influential characters including Trotsky and Freud.

Our visit to the Café Central was really especial, as when we were there La Cumparsita -the most famous tango- was playing, which transported back to our home country, Uruguay, where the song was composed.

Café Central is the epitome of Viennese elegance, with every details in the building and on your plate accounted for. This is perfect spot to spend hours to get inspired like the giants of history.

Tip: Vienna has a trinity of famous cafes, which includes Café Central. We recommend you go to all three, but a great option for summer evenings or dinner is Café Landtmann. This café was also the spot of inspiration for many artists from Gustav Klimt to Paul McCarthy.

Given its location close to the most famous attractions and sights, Café Central is a great pit stop to drink a good cup of coffee and replenish the energy lost while wandering in the city. 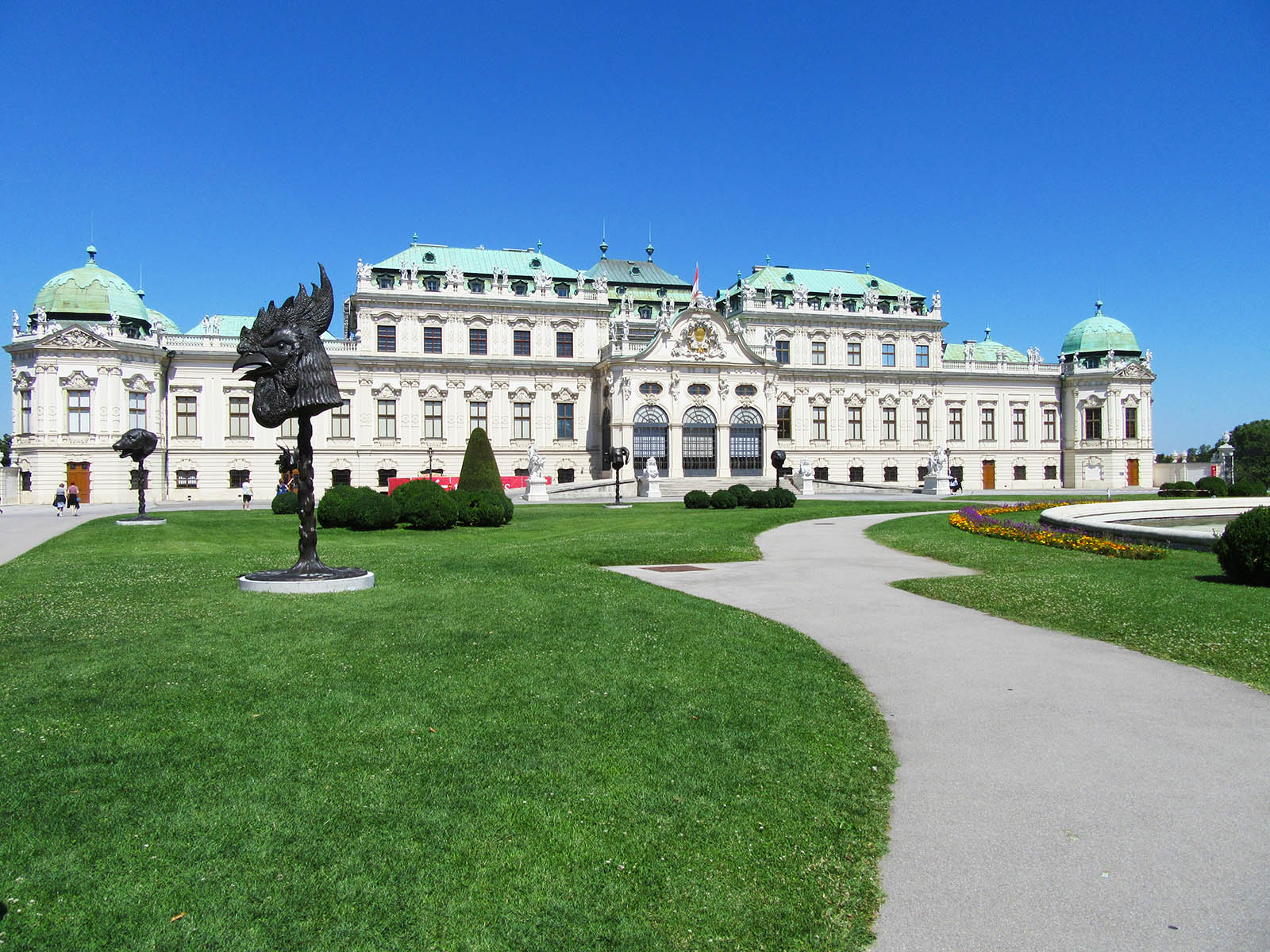 The Belvedere is the embodiment of Viennese elegance and sophistication, last serving as the residence of the heir to the Austro-Hungarian Empire, Franz Ferdinand. What makes this palace special is its famous art collection, which includes works spanning from the Middle Ages to today.

The Belvedere consists of two palaces: Upper and Lower Belvedere. The two palaces were built in the eighteenth century to serve as the summer residence of Prince Eugene of Savoy.

The palace is essentially one of the oldest museums in the world. The Upper Belvedere was one of the first public museums and today is the most visited art museum in Austria – with highlights by Klimt (in fact the world’s largest collection), Schiele, Funke, Monet, and van Gogh.

The Lower Belvedere served as the residential palace of Prince Eugene, who was a patron of the Baroque style; the Belvedere’s gardens are a highlight of the Baroque landscape architecture. 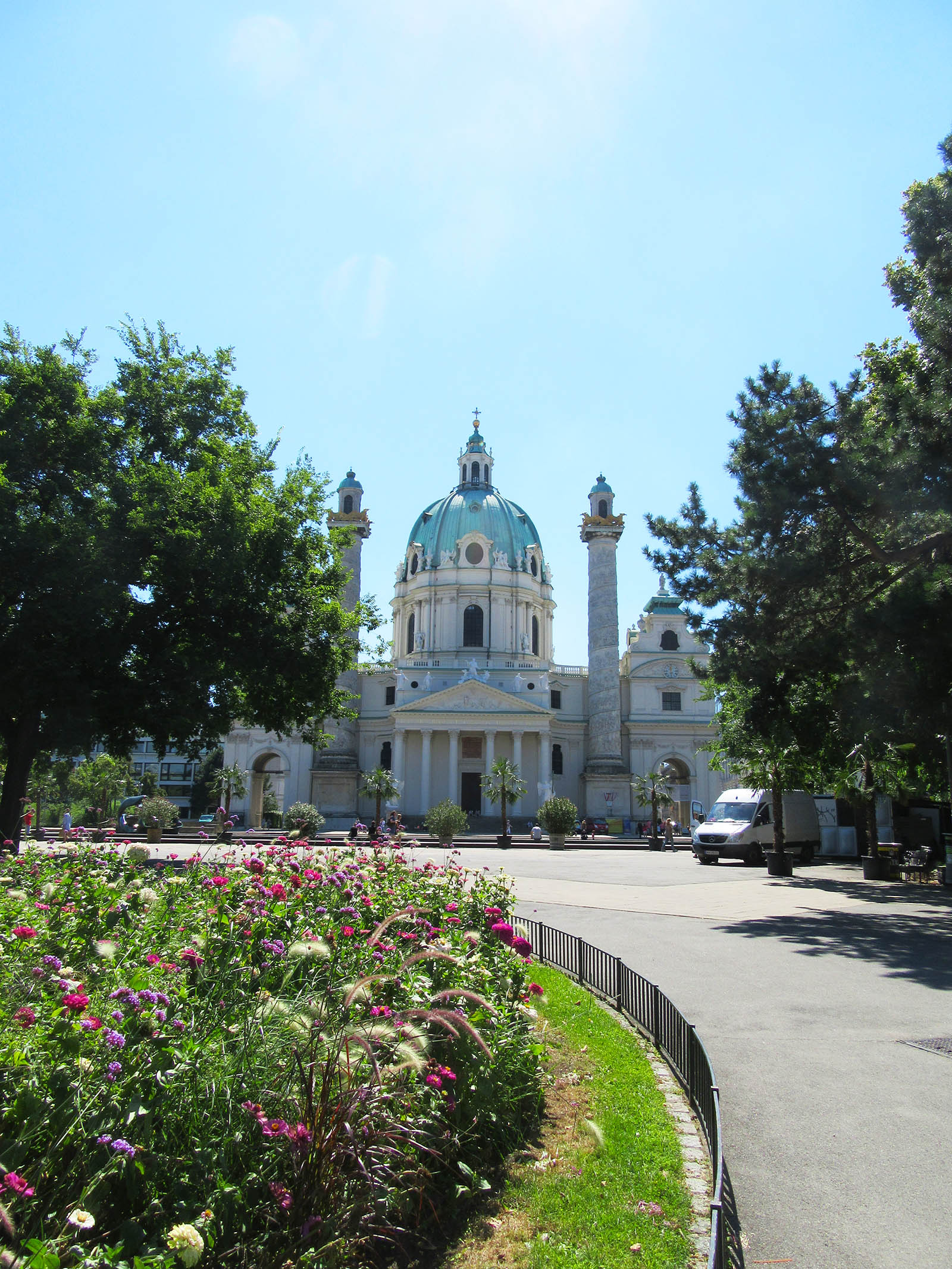 The façade of the church will catch your eyes upon your approach, with two giant imperial columns and a majestic dome. Once you see this beautiful church you will immediately think of Rome, as it clearly takes on the airs of that ancient empire; another Baroque structure within Vienna that will leave you breathless.

The construction of the church was the result of an oath taken by Emperor Charles VI to have the city overcome the last major bubonic plague epidemic and was finally opened in 1739. There is a panoramic elevator to take visitors to a platform where you can study the frescoes more closely.

Operating hours of the panoramic elevator:

Designed by Friedensreich Hundertwasser, the Hundertwasser House is one of Vienna’s architectural highlights. In a city of imperial structures and majestic facades, this is one marvel that stands out in the crowd.

With its colorful exterior and litany of plants hanging from the balconies, the Hundertwasser House will not only leave an impression, but captures the concept of Gesamtkunstwerk in a modern way. Keep in mind that you will not be able to go in, as it is a residential building – but it’s worth stopping by to admire the building’s uniqueness. 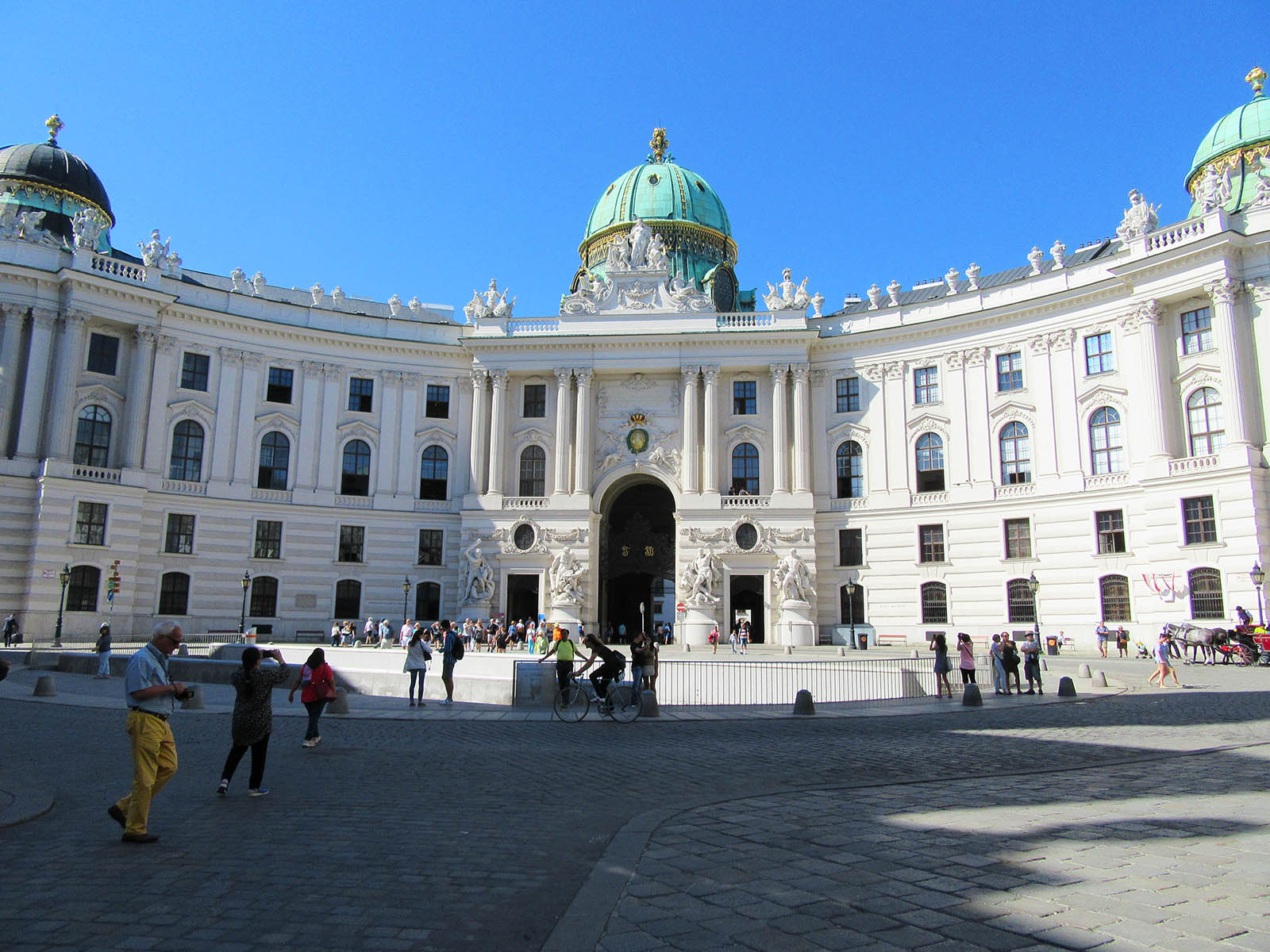 For more than seven centuries, the Habsburgs ruled their empire from the Hofburg Imperial Palace. A truly remarkable work of art itself, the palace is located in the center of Vienna, serving as the pièce de resistance in a city saturated with majestic structures. The Hofburg was built in the 13th century and has been expanded over the years as Habsburgs increased their power.

Today, the Imperial Palace houses the office of the Federal President as well as one of the country’s best museums with a stunning art collection. The building also functions as a convention center of sorts, where high level forums are held every year.

When visiting the Hofburg, make sure to stop by the Silver Collection – a museum featuring the entire collection of imperial silver tableware once used by generations of Habsburgs royals. A visit to the museum will provide a peak into the world of court ceremony and the ritualist dining etiquette of the time. There are nearly 300 pieces on display in the Sisi museum which belonged to Elizabeth including her famous parasols, her personal collection of milk glass for traveling and its special case, and other personal items.

Visitors to the Imperial Apartments will have access to the 24 rooms in the apartments occupied by Emperor Franz Joseph and his wife Elisabeth, which comprise of studies, residential suites and reception rooms. Each room is fully furnished and decorated to reflect the historical period of the last Imperial Family.

Visit the official website for the latest entrance fees

Offering a different program every day, the Vienna State Opera offers first class productions. There are approximately 50 operas and ballet works per season, danced by the Vienna State Ballet.

How to not be scared of flying