What is the Golden Circle tour in Iceland? 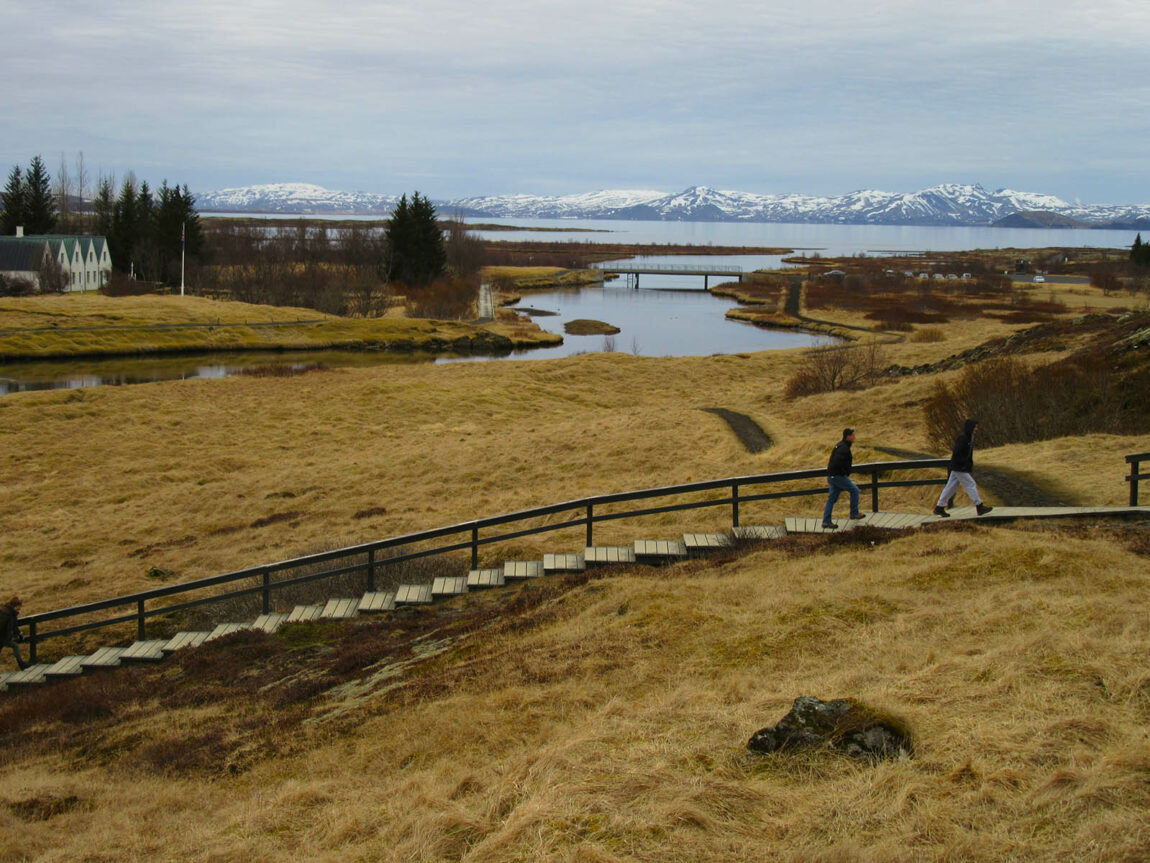 Find useful information about the Golden Circle tour in Iceland.

The Golden Circle tour encompasses three of the most popular attractions in Iceland: Thingvellir National Park, the Geysir Geothermal Area, and Gullfoss waterfall. A tour to the Golden Circle gives you the opportunity to witness the tremendous power of geysers, thundering waterfalls and dramatic fissures and cliffs straight out of Game of Thrones – basically three spectacular attractions in just one tour.

The Golden Circle covers some of Iceland’s most spectacular scenery and, not surprisingly, is one of the most in-demand tours from Reykjavik. When we visited Iceland, we took tours every day – including to the Golden Circle – as we were only in the country for a couple of days and booking tours ended up being the most convenient option for this trip.

A tour to the Golden Circle is not only the ideal “Instagramable” excursion you’ll take in a short trip but you will also learn fascinating stories about the history behind the places you will be visiting.

If you are pressed for time while you are in Iceland, this tour is an absolute must. It only takes a few of hours to complete so you will have some time during the day to explore the capital city if you are staying there. There are plenty of options to book a tour to the Golden Circle. Check out the tours provided by Viator below:

Tip: I recommend you book a small group tour. Less people means that getting on and off the bus times are shorter, giving you the opportunity to spend more time at the attractions. 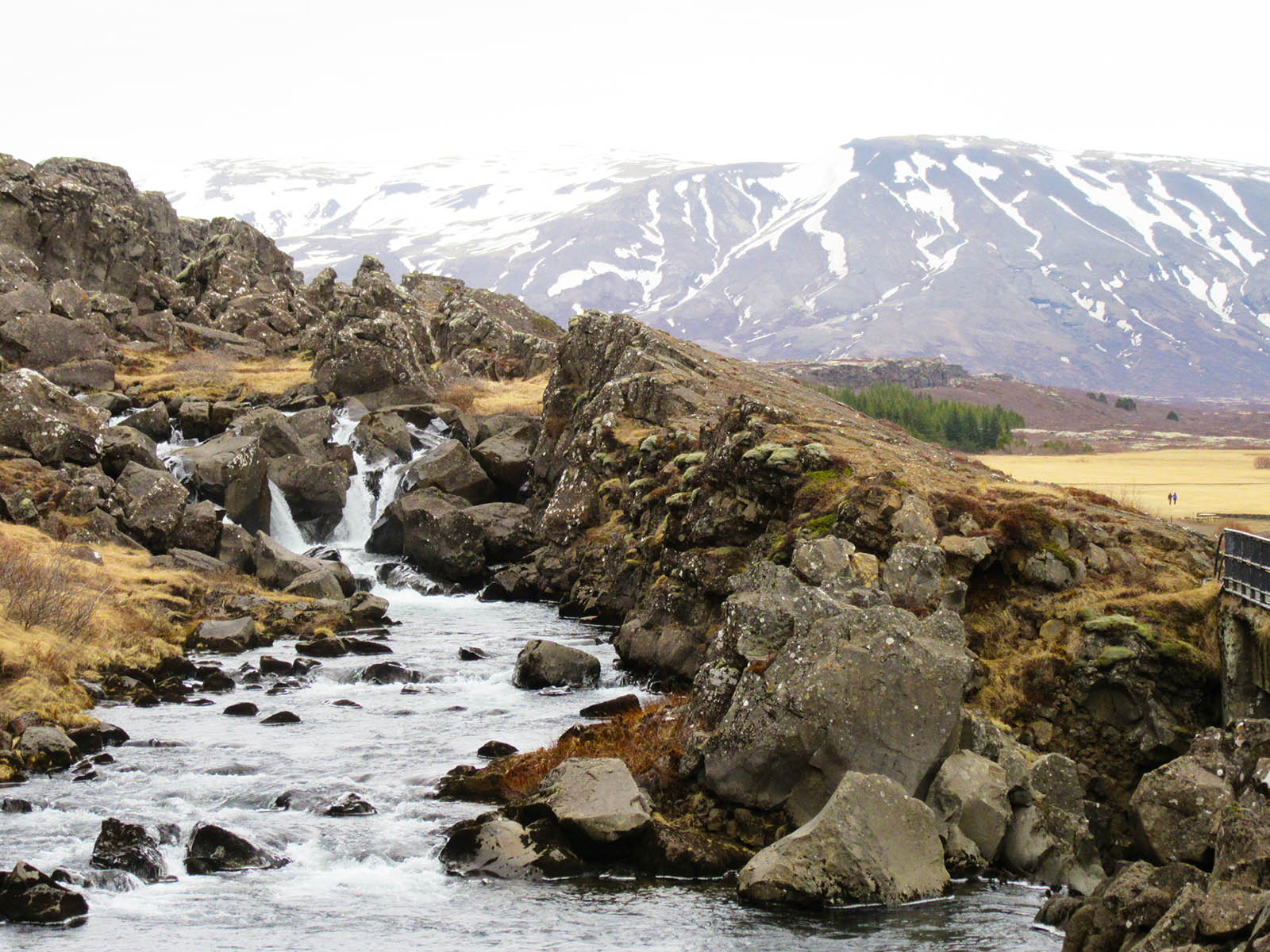 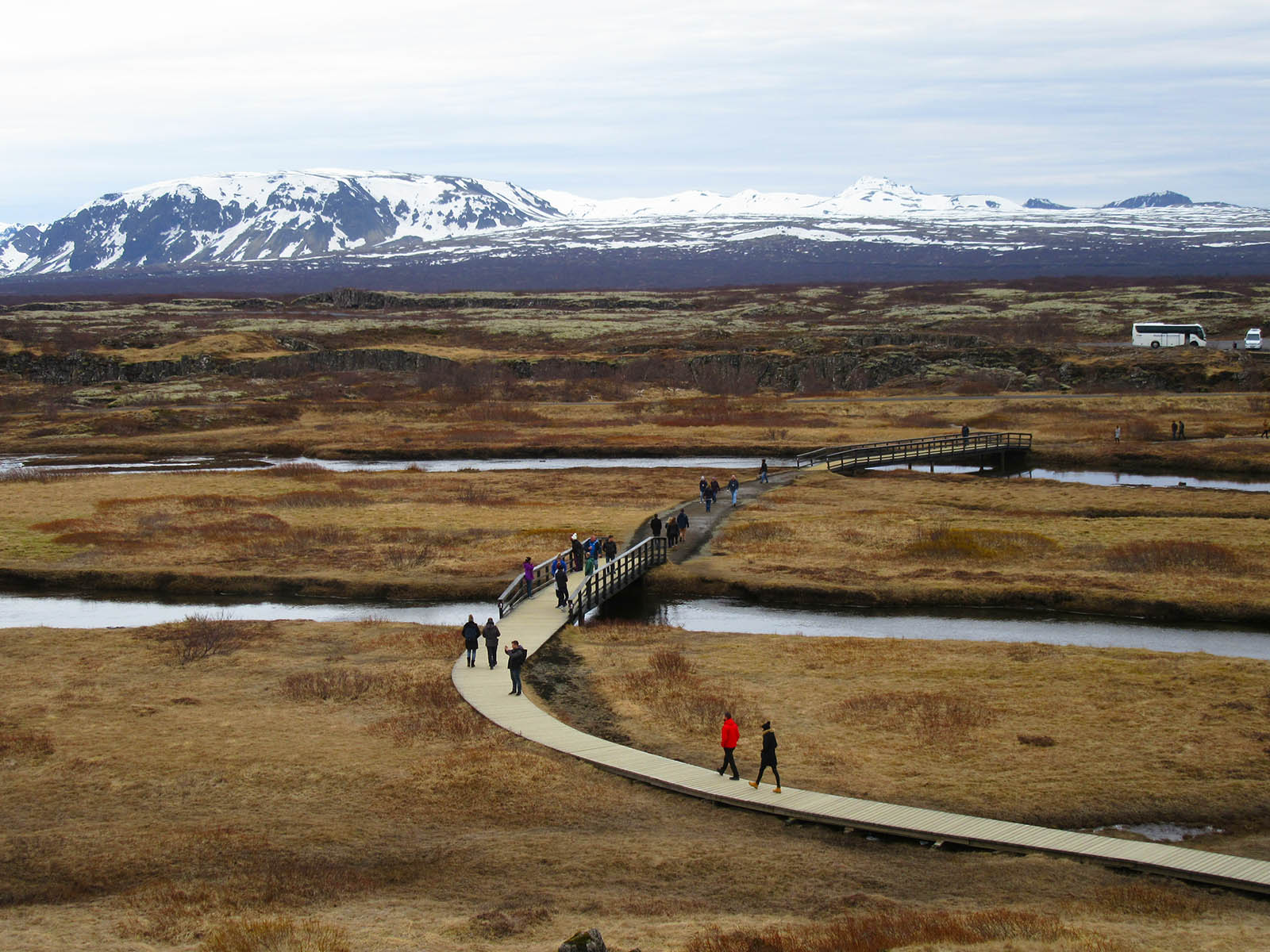 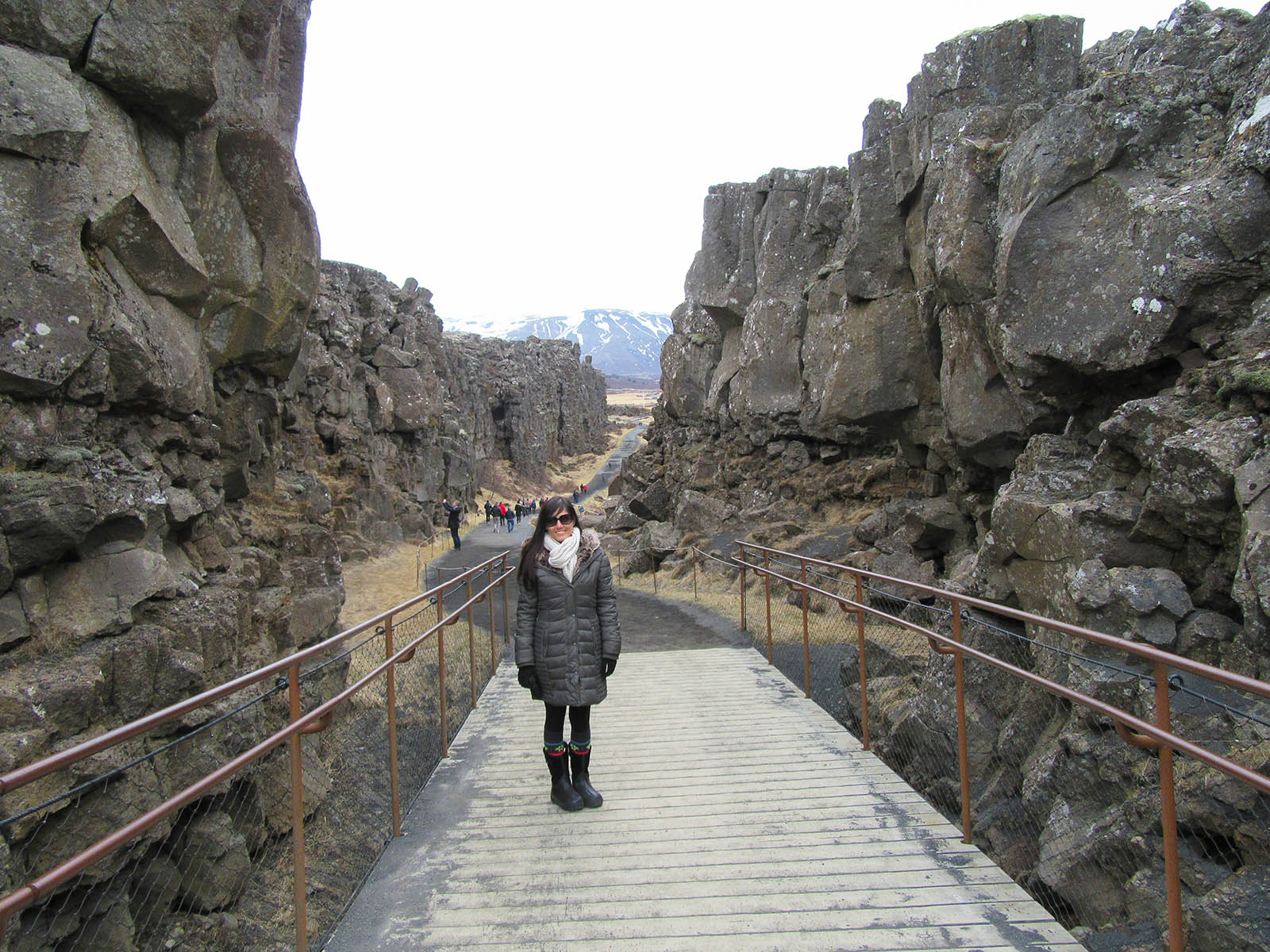 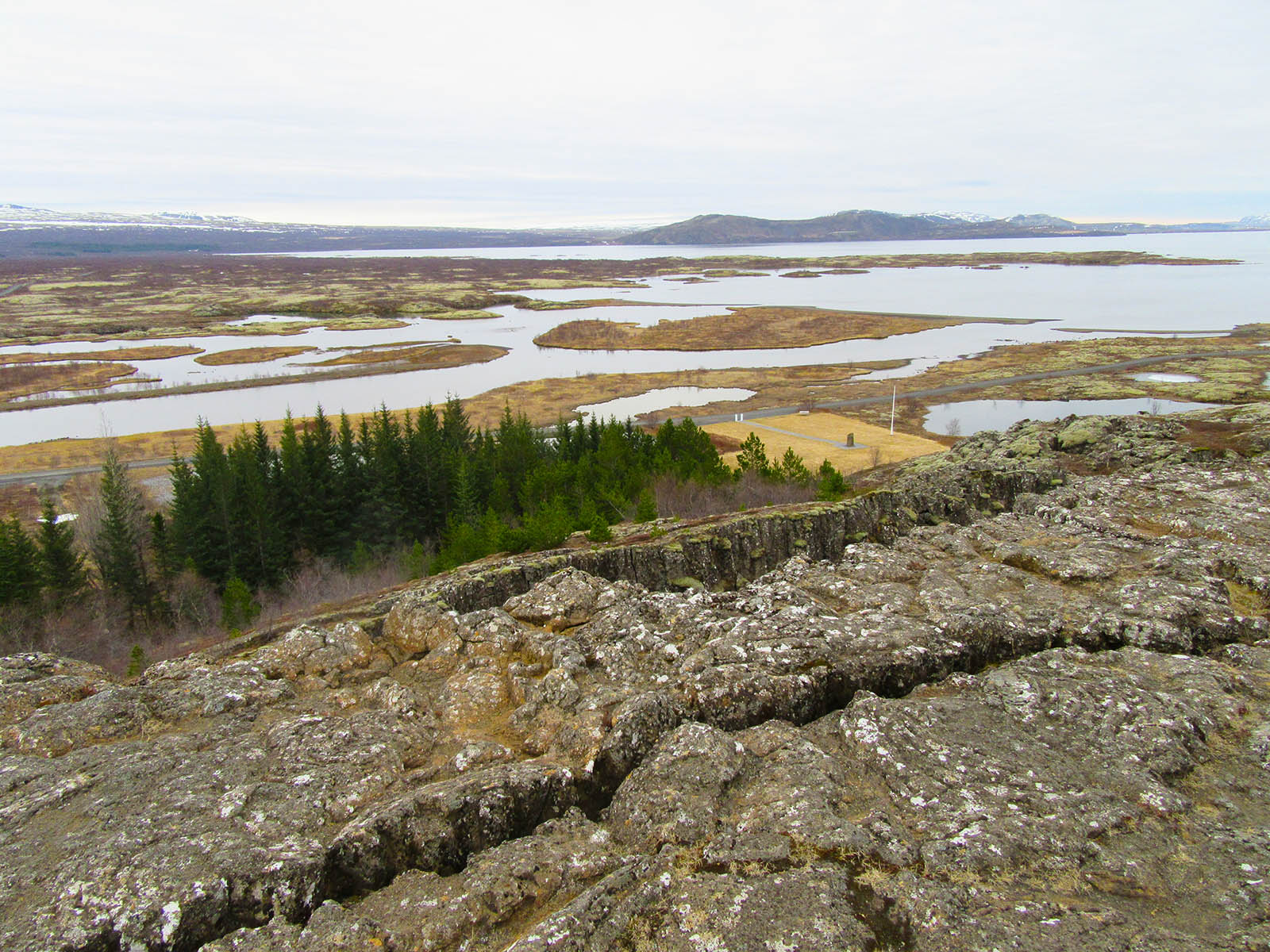 Thingvellir National Park is the first stop of the Golden Circle tour and is located approximately 45 minutes from Reykjavik. The national park is essentially an active volcanic area where the Eurasian and North American tectonic plates meet – you are literally standing in between Europe and North America.

This area is surrounded by mountains and grass-covered lava fields adding a geological significance to the underlaying cultural importance of this spot. Lake Thingvallavatn – the largest natural lake in Iceland – can be found at Thingvellir National Park and offers a very unique dive/snorkeling experience where visitors can swim in the glacial waters.

Several major events which are of important significance in Iceland’s history have occurred at Thingvellir National Park. Thingvellir was home to the original site of Iceland’s first parliamentary assembly, the Althingi (“All-Thing”), that began in 930 and continued to convene at this location until 1798. All major laws were voted at this very spot during the Althingi, including being the first (probably only) country to vote Christianity as the state religion in the year 1000.

Have your camera ready because you will want to snap pictures of Thingvellir National Park’s stunning beauty as you will be surrounded by imposing cliffs, volcanic landscapes, and gushing waterfalls. The paths are well marked so you won’t get lost, and there are several stair cases to get you to the different park areas.

And if you are a fan of Games of Thrones, you will immediately feel right at home as Thingvellir National Park was one of the most famous filming locations! 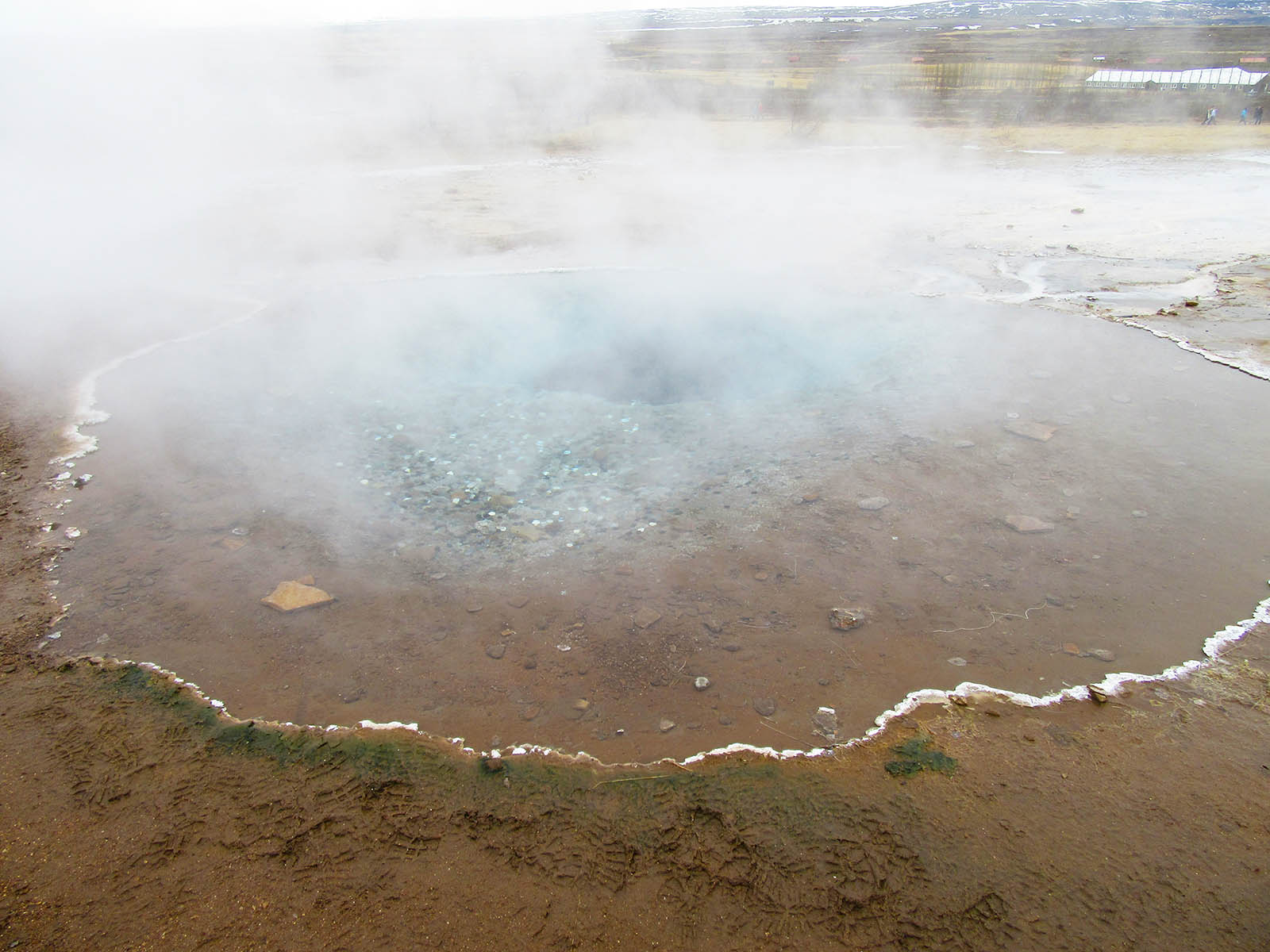 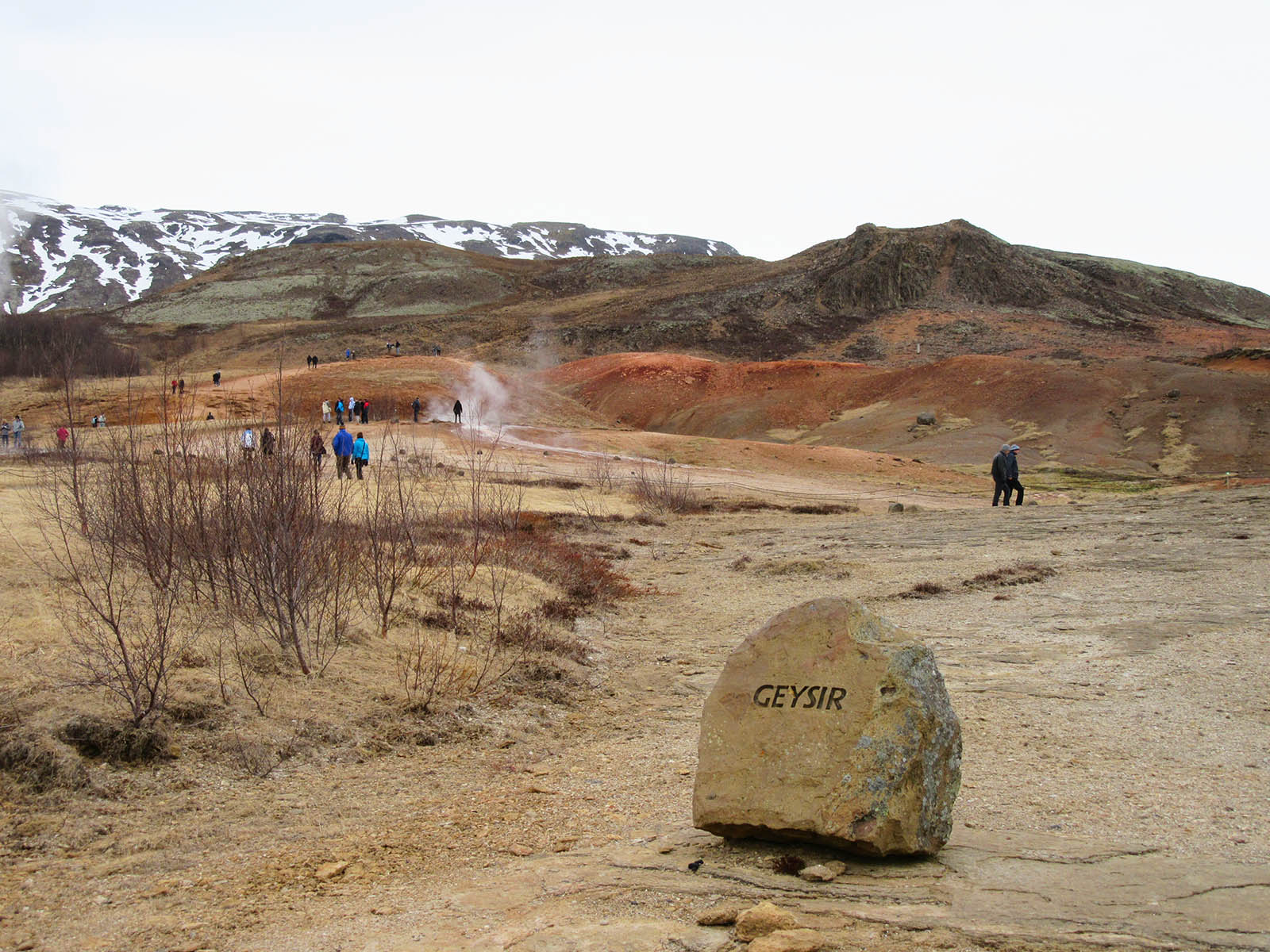 The Geysir Geothermal Area is a famous hot spring park in the geothermal Haukadalur Valley and is the highlight of the Golden Circle tour. As you approach this area you will notice a change in landscape as it becomes more alien with the smell of sulfur floating all around. On your approach, you’ll very likely see steam rising from miles away as the park announces to incoming visitors the natural spectacle they are about to witness.

Strokkur, the most famous hot spring, throws boiling water from 20 to 40 meters high in one powerful burst. Yes, it’s a jaw dropping spectacle to witness this, and Strokkur erupts every 5 to 10 minute so don’t be upset if you miss it the first time. I took advantage and spent several cycles in absolute awe of the geyser. Hearing the thunderous burst the geyser makes when it erupts is one of those unexpected experiences that will be difficult to forget. Before the geyser throws water into the air, you will hear a loud thump alerting you of what’s about to happen – this is your signal to get your cameras ready. 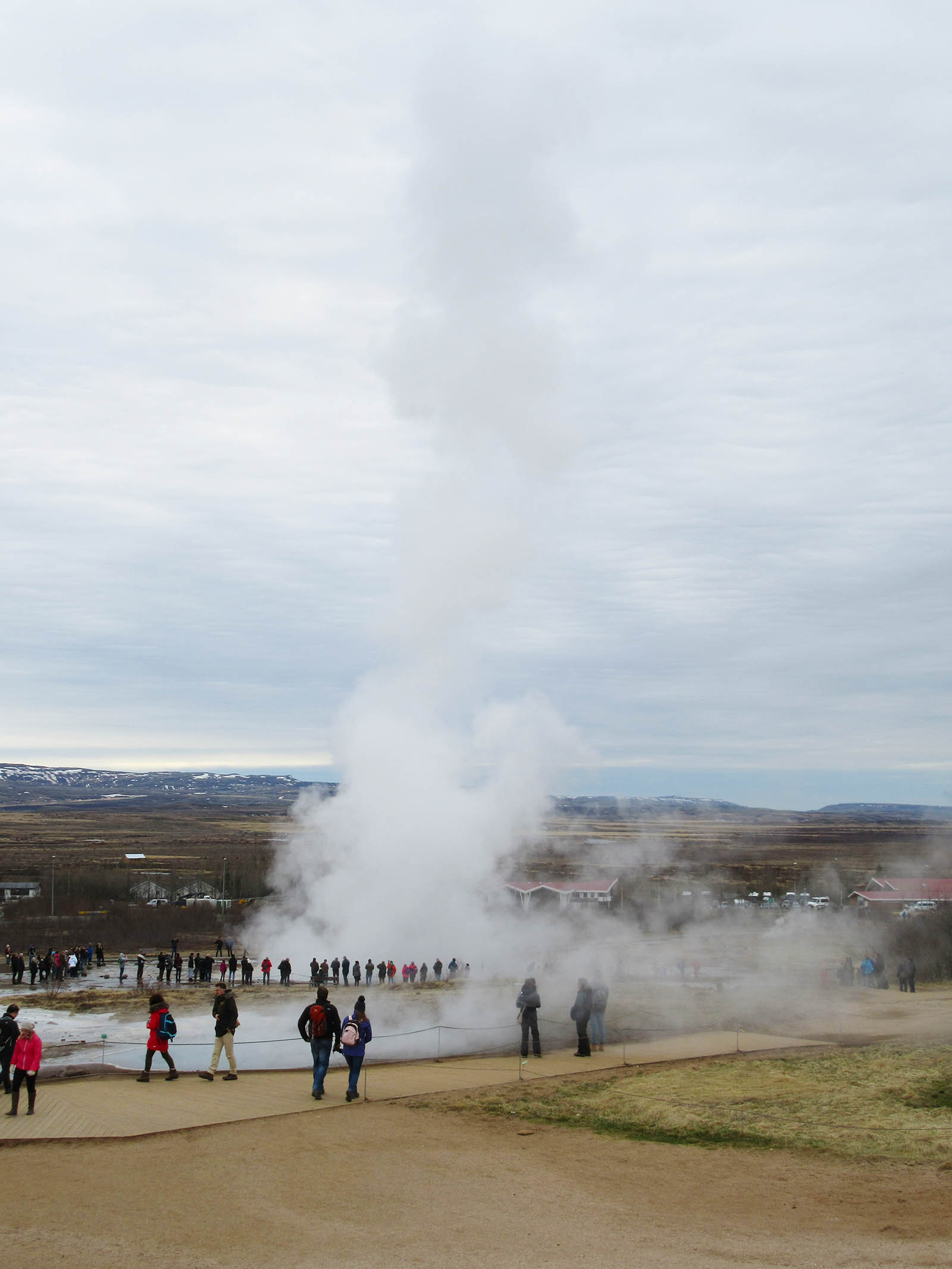 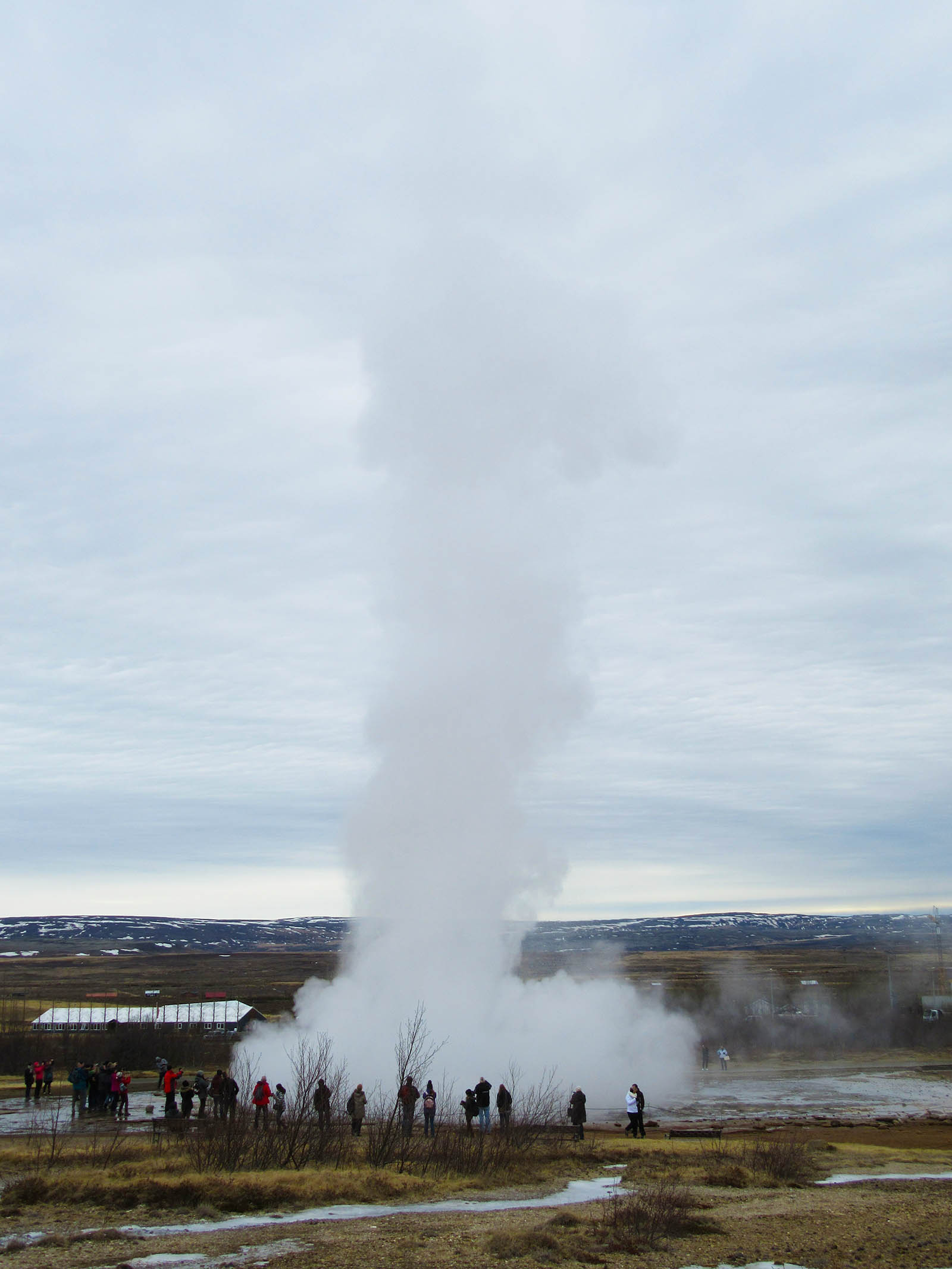 Unfortunately, the original Geysir is mostly inactive due to the local tectonic activity combined with intrusive human intervention. Studies show that the original Geysir has been in existence for 10,000 years and it erupts in cycles. In the early 1910s, it was known to erupt every 30 minutes, however, its activity had almost ceased by 1916. Back in 2000, it erupted throwing water to a height of 122 meters – much more impressive than Strokkur. There are over 20 other sleeping geysers in the area, so with some luck you too may experience the awakening of a sleeping giant.

The Geysir Geothermal Area is not only about geysers. There are plenty of hot pools, clay pots and fumaroles sprinkled around. Take some time to stroll in this hot spring area bustling with geothermal activity and experience the powerful energy of Icelandic nature. 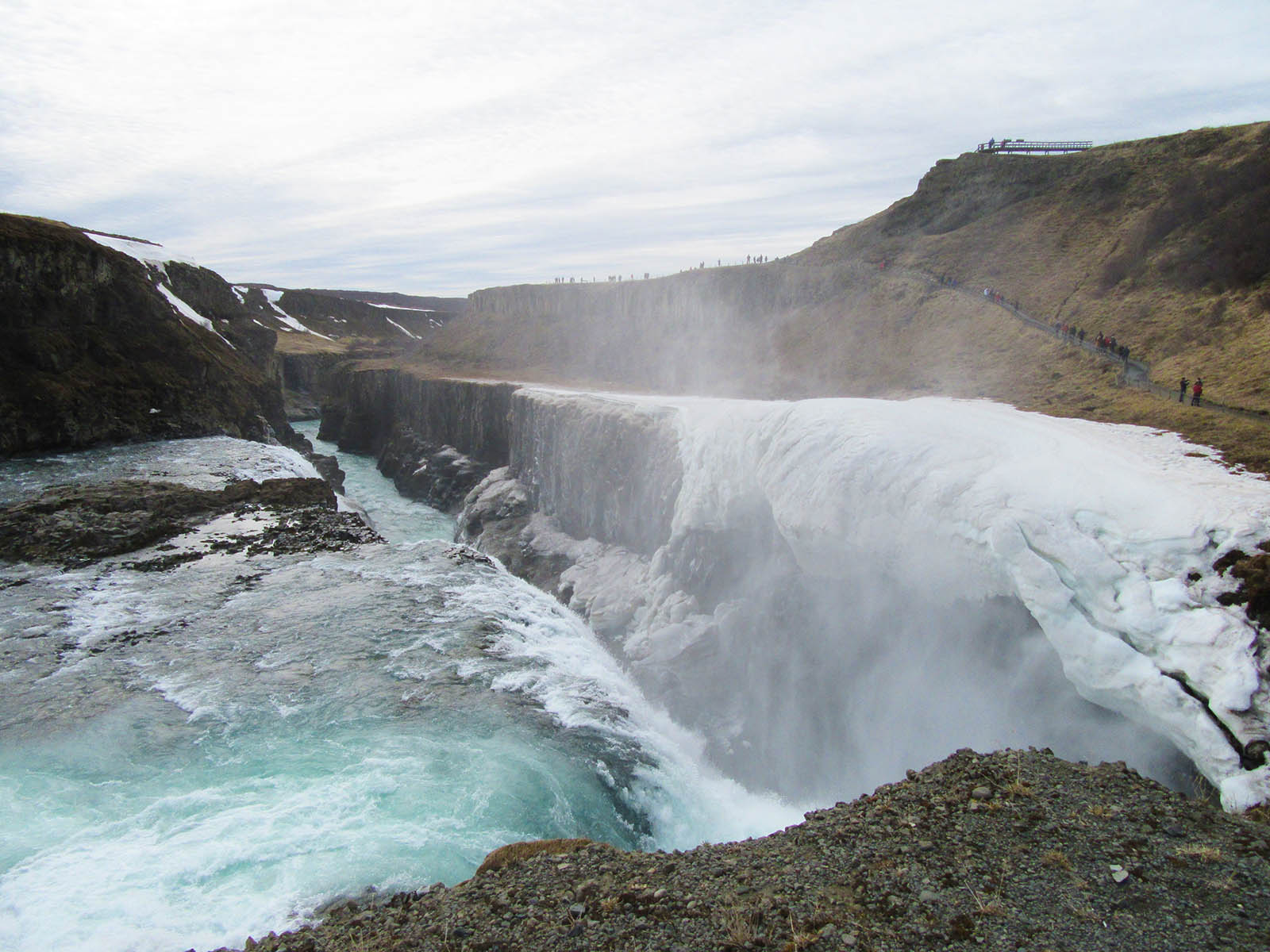 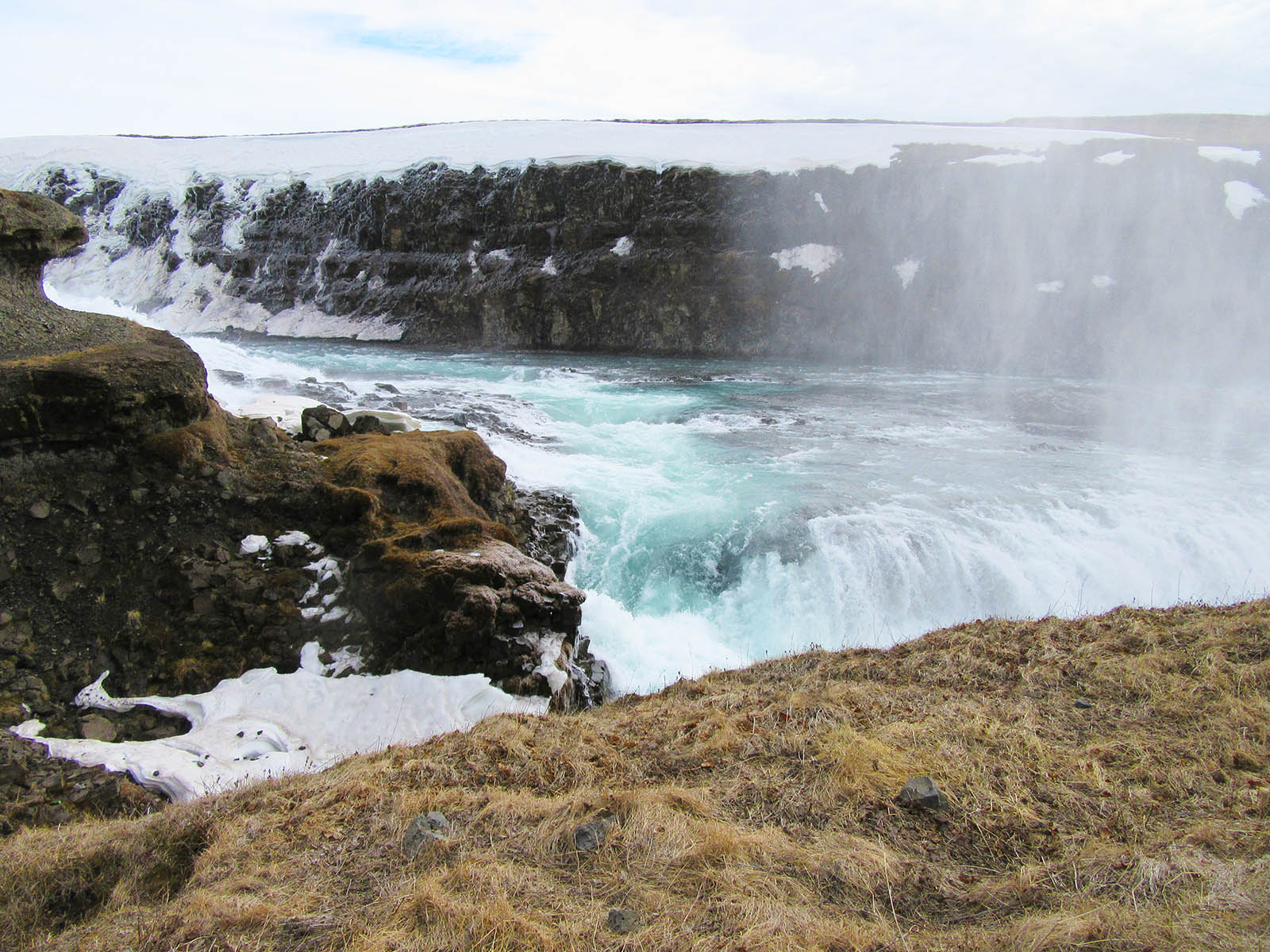 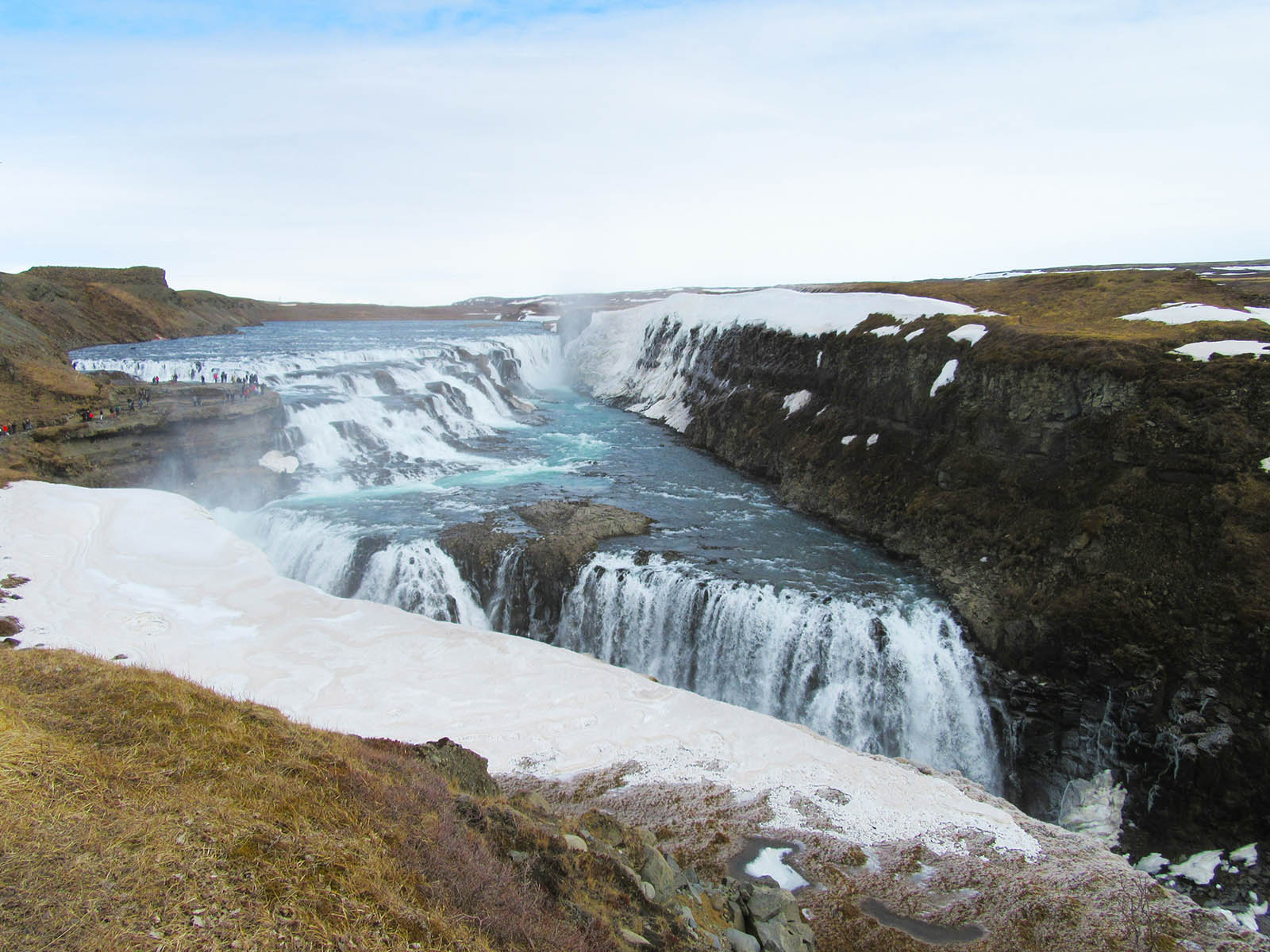 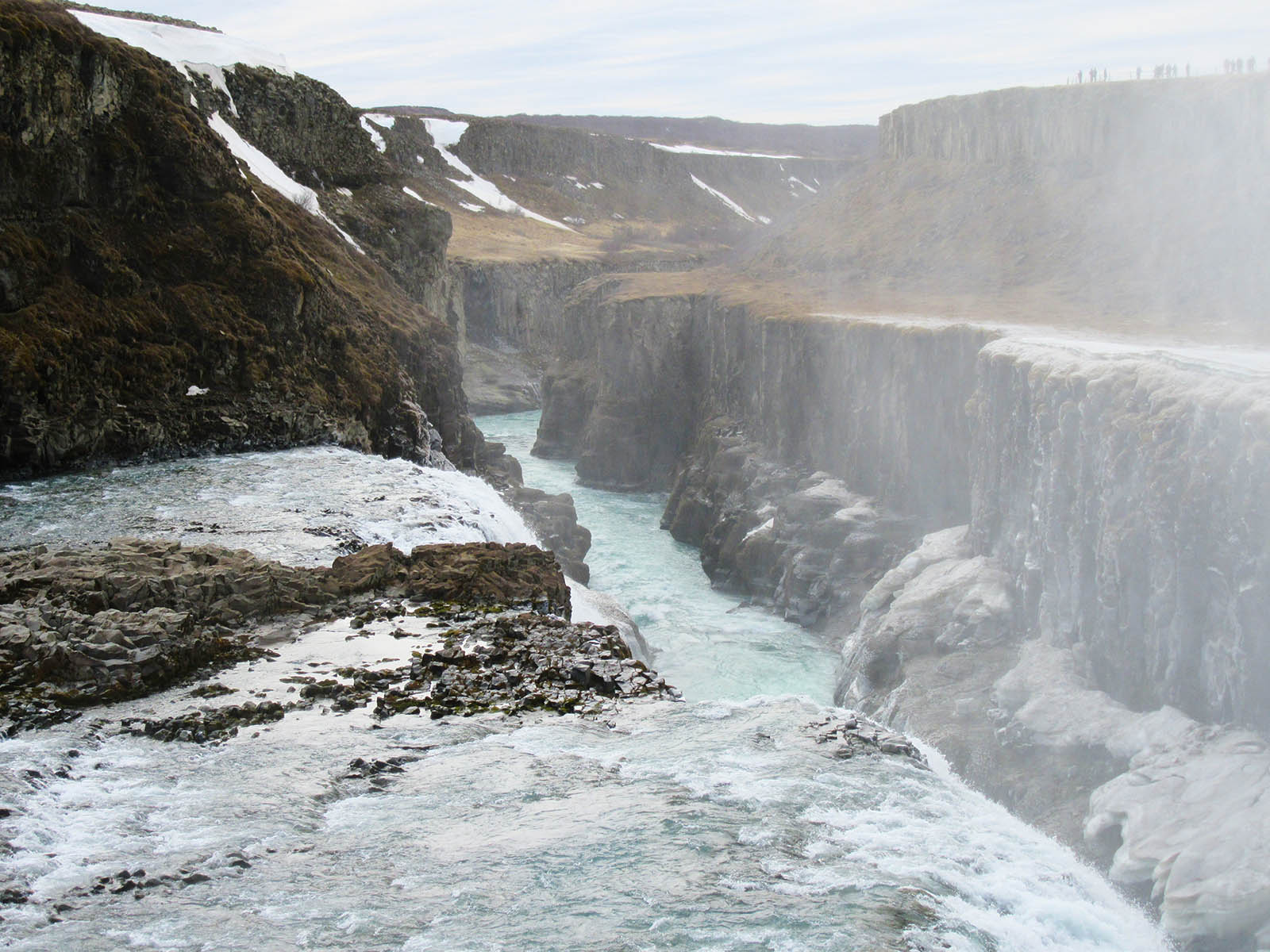 Located only 10 minutes away from the Geysir Geothermal Area, Gullfoss is the second biggest waterfall in Iceland. The waterfall is 32 meters in height, and it has two drops giving Gulfoss a dramatic pivoting staircase effect. During the waterfall’s heaviest flow in the summer, it pours an average of 140 cubic meters of water every second, causing this effect to be even more dramatic.

While some attribute the name Gullfoss to the golden hues that shine in its glacial waters, others think that it’s because of the rainbow that appears when the sun hits the water spray thrown up by the waterfall. Don’t go chasing waterfalls or rainbows even in the summer because the water is ice cold!

Gullfoss has a compelling story behind it. In the early 20th century, foreign investors saw the potential of turning Gullfoss into a hydro-electric plant by adding a dam. However, Sigríður Tómasdóttir, a local environmentalist and farmer’s daughter, was ready to challenge these plans. Through her herculean efforts, she mounted a case against the investors’ plans, often going to Reykjavík to fight her cause. All her hard work paid off as she was persuasive enough to get laws passed which prevented foreign investors from ultimately building the dam. To commemorate her efforts, a plaque and stone statue have been built above the falls – Sigríður Tómasdóttir still protects the falls today.

The viewing platforms offer magnificent views of the thundering waterfall where you can photograph Gullfoss from several angles. If it’s a sunny day, keep an eye out for the famous rainbow that forms in the mist. But the waterfall is not a spectacle only for the eyes, keep your ears open to listen to the roaring sound of Gullfoss and be amazed by the power of raw nature.

The waterfall is open year-round, and both the pathways and viewpoints are wheelchair friendly. If you visit Gullfoss in the summer when the ice has melted, it is possible to walk to the edge of the falls to let the waterfall sprinkle water on your face.

Itinerary and tips to drive the Transfagarasan road in Romania

The how to’s of staying healthy while traveling