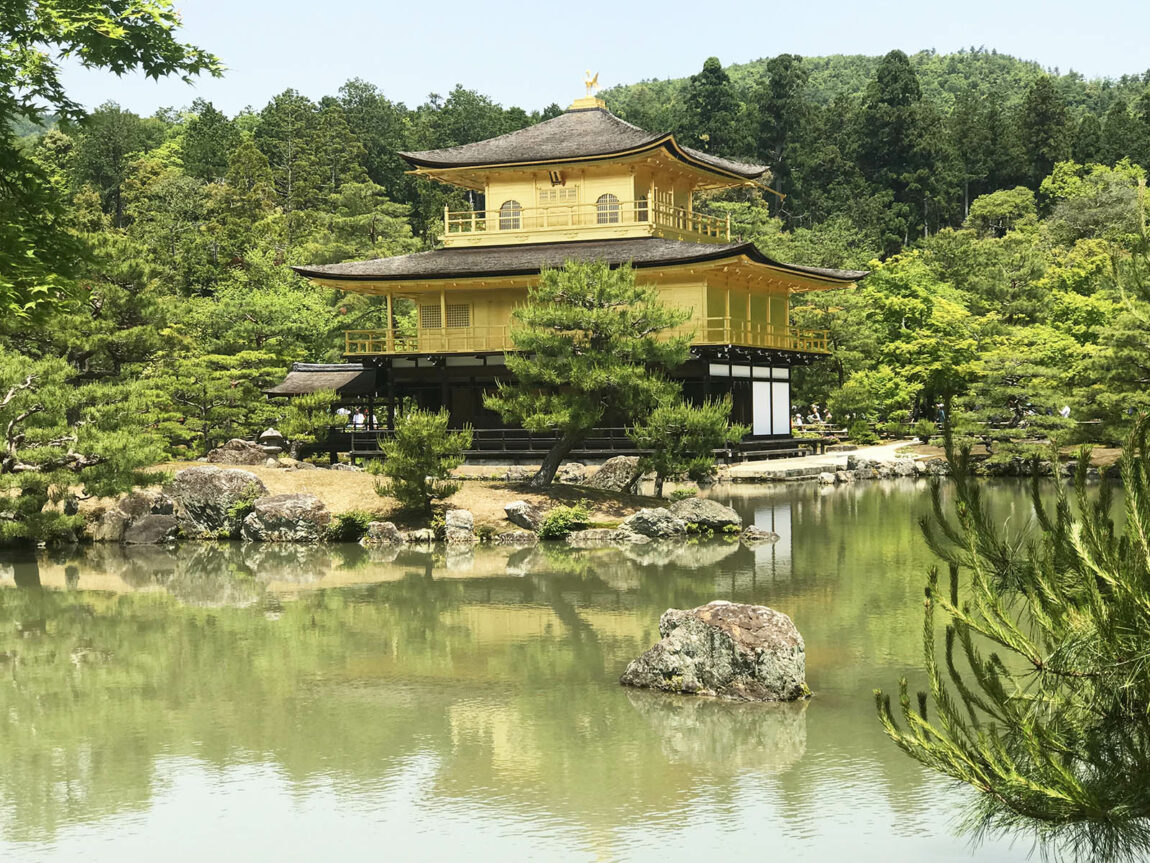 The Golden Pavilion in Kyoto, Japan, is a stunning Buddhist temple covered in gold leaf, that should be added to your itinerary when visiting the city.

A visit to Kyoto is not complete without a trip to the Golden Pavilion. Despite its off-the-path location, the pavilion draws crowds of tourists wanting to take the iconic picture of this remarkable architectural wonder with its reflection glistening in the pond. The Golden Pavilion is magnificent year-round, as each season uncovers a side of its personality – whether in the fall when the changing leaves complement the pavilion’s gold exterior or during winter when the temple is covered in snow but shining like a beacon.

Tip: This is an extremely popular attraction and therefore it’s always crowded. I recommend you arrive early in the morning to avoid crowds as much as possible. Also, try to stay away from visiting during the weekends.

As soon as you pay the entrance fee and wander into the pavilion complex, you will be overcome with a feeling of tranquility despite the temple’s crowds. The grounds are impeccably maintained and with trees dotting the emerald landscape, creating a serene and peaceful atmosphere. After a short walk, the path will lead you to the star of the show: The Golden Pavilion radiating its majestic splendor as it rests within a silver pond.

Unfortunately, it’s not possible to enter inside the actual building. However, you can easily capture its mesmerizing architecture from several angles as you stroll around the pond. Before you leave, make sure you stop by the souvenir shops and get a matcha ice-cream in one of the stands located at the exit. They are absolutely delicious!

Tip: if you want to have the “golden experience” try the gold leaf covered ice cream cones!

Located in northern Kyoto, the Golden Pavilion (Kinkakuji) is a three-story Zen Buddhist temple on the grounds of the Rokuon-ji temple complex. The gold leaf that covers the top two floors serves to spiritually mitigate and purify any pollution, or negative thoughts and feelings, towards death. The roof of the template is shingled with planks of thin sawara cypress, and on the peak of the temples is perched a shining phoenix, traditionally an auspicious symbol in China (more on that below).

The Golden Pavilion has three floors: each with its own style, but harmoniously blending in a unique structure.

The first floor, called The Chamber of Dharma Waters, was built in the Heian palatial style, shinden-zukur. This style is characterized by having natural, unpainted wood and white plaster. Statues of the Shaka Buddha and Yoshimitsu are found on the first floor and can be viewed when the windows are open.

The second floor, called The Tower of Sound Waves, was built in the buke-zukuri style that was common among samurai houses (similar to villas) in the Kamakura period. Inside there is a seated Kannon Bodhisattva surrounded by statues of the Four Heavenly Kings. The third floor, called Kukkyo-cho, was built in the style of Chinese Zen temples and is topped with a traditional golden phoenix.

While the building has traditionally been a temple, it served as the retirement residence of Shogun Ashikaga Yoshimitsu. The Golden Pavilion was the inspiration of the Silver Pavilion (Ginkakuji) which was built a few decades later by Yoshimitsu’s grandson, Ashikaga Yoshimasa.

What we see today is not the original building as the pavilion was burned down several times in its history: Twice during one of Japan’s civil wars (1467–1477), which destroyed much of Kyoto, and as well in 1950 when a fanatical monk set it on fire.  The monk was sentenced to seven years in prison but ended up being released because he was later diagnosed with severe mental illness. The current structure was rebuilt in 1955. In the fall of 1987, renovations took place to reapply the lacquer and gold leaf; restorations were also done on the ceiling painting and the statue of Ashikaga Yoshimitsu.

The Golden Pavilion is one Kyoto’s most visited temples and was designated as a UNESCO World Heritage Site in 1994. 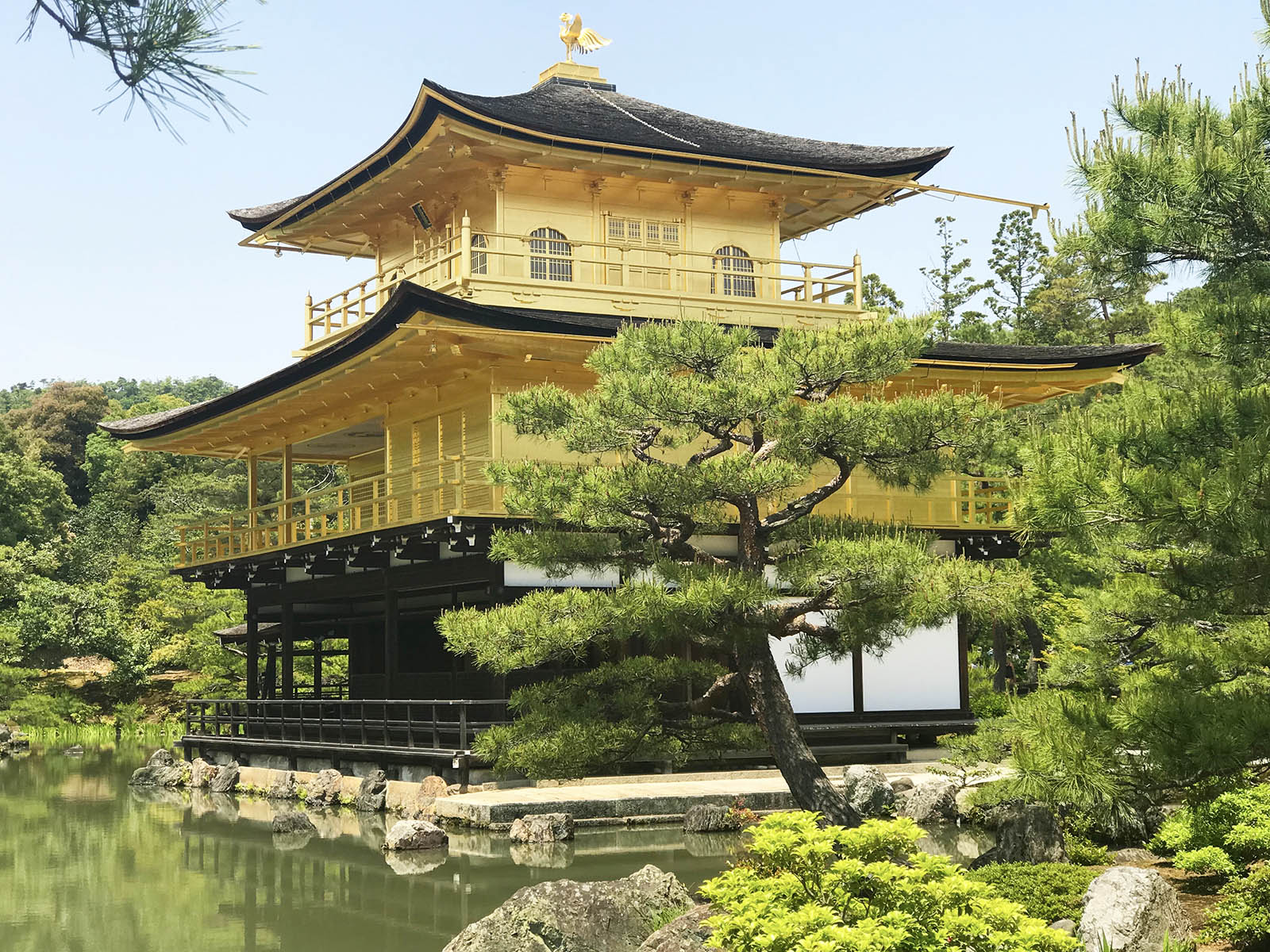 The gardens designed around the Golden Pavilion are a scenic landmark incorporating several zen elements and shouldn’t be missed when you visit. The central pond is approximately 6,600 m² and contains several islands including Ashihara-jima, and famous sacred rock formations, such as the Hatakeyama stone. Anmin-taku, a pond which surrounded by a forest is renowned in Japan as it will not dry up even when there are droughts; therefore, it’s used as a holy site to pray for rain.

The small islet located inside the pond features a five-ringed stone pagoda – Hakuja-cho or White Snake Mound- which is said to enshrine the Saionji family deity, thus this pond is considered to be one of the historical remains of the family.

A visit to the Golden Pavilion will take you around 30 minutes which will give you time to take a couple of pictures, marvel at the temple and stroll through the gardens. Take your time, as it is a perfect place to collect your thoughts and meditate.

Take Kyoto’s city buses 101 or 205 from Kyoto station. The journey will take around 40 minutes. Another option is to take the Karasuma subway line to Kitaoji Station (a 15-minute trip) and then take a taxi (10 minutes) or bus (101, 102, 204 or 205; journey time 10 minutes) from there to the Golden Pavilion. If you are driving, there is parking available onsite.

The Imperial Palace Tokyo, Japan, a walk through history

The best ways to avoid getting sick in the plane

Visit El Calafate in Argentina: The gateway to the best attractions